You are too weak to ride on the bus. You will ride in my car! 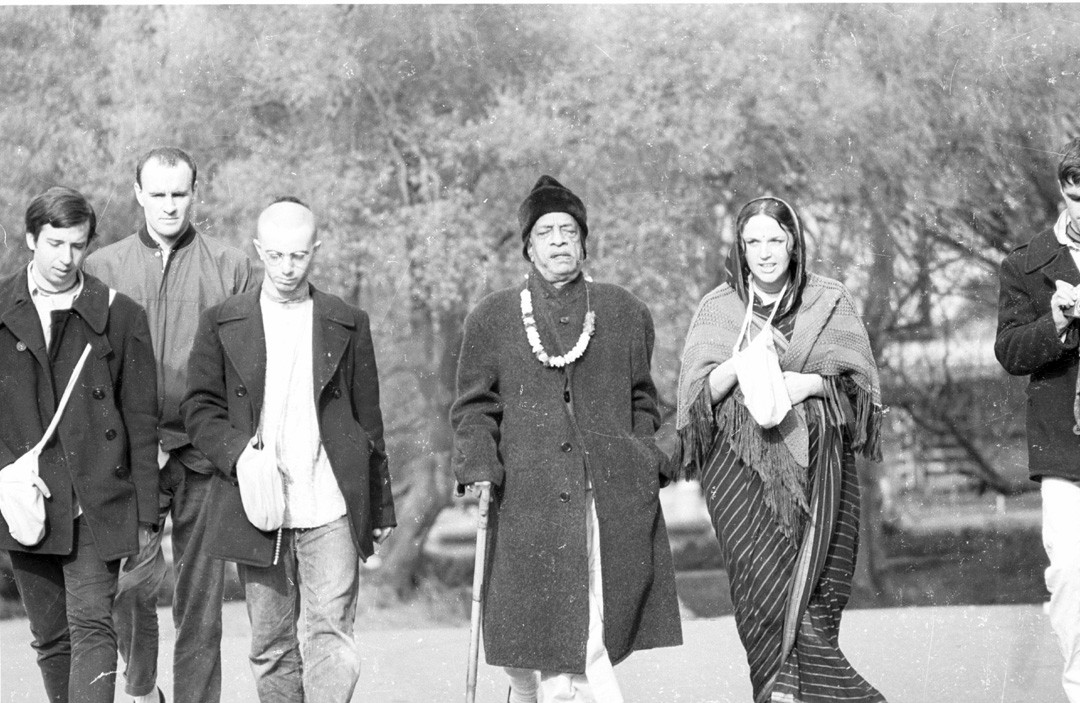 Yamuna: Due to the intense preparations for the pandal and the extremely long hours of service over many days, I was taken down with a severe case of jaundice. It was the only time I was extremely ill during my time in India.

So after the Deities were installed, and just as I came back to the tent side of the pandal, I became unconscious, and for maybe two weeks or more I had a burning fever. So I ultimately attended very little of the pandal itself.

We were staying at Dalmia Bhavan at the time, and it was a very crowded situation—perhaps ten to fifteen of us in one room—and the only place free was the bottom shelf in one of the walk-in closets. We had all of our paraphernalia piled up, and I was in a sleeping bag down on the bottom shelf.

So somehow, Srila Prabhupada noticed I was missing, and I was later told he had inquired many times where I was. One day I became aware of the door being opened, and turned to see Prabhupada’s lotus feet walking into that closet room.

I offered my obeisances as best I could, and by then he is leaning down, all the while chanting the mahamantra. Then he placed his hand on my head and inquired, “Yamuna? How you are doing?” Firstly I said, “I am always thinking of you, Srila Prabhupada.”

Then I gave him my symptoms, and he said, “I think this is jaundice; I think you have got hepatitis-jaundice. Now I will take charge of your recovery. You will never get well in these conditions on the floor.”

Srila Prabhupada had a hospital bed brought in for me and moved me into a room right next to his, with floor-to-ceiling windows, neem trees outside, and a fan. And I remember being propped up in this bed, and he came in every day to check on my progress. He also called in an Ayurvedic doctor and gave me a diet for jaundice.

He said I had to take something called petha, a wax gourd or a white kind of pumpkin that is taken raw. It’s covered in a thick layer of caramelized sugar, so to me it looked like a ghastly thing to eat. Srila Prabhupada said, “This is your medicine, and you have to eat it every day; and you also have to drink sugarcane juice.”

So I remember the first time I took a bite of petha; it tasted like the most bitter, horrible thing because of the jaundice. Srila Prabhupada would personally stand and watch me eat the petha, feeling miserable because of the taste, and he would actually smile and chuckle about that.

So unfortunately, I was not able to engage in my services through the rest of the program, as I was fully bedridden for over two weeks. Yet I was feeling great bliss and happiness by the personal care and unfathomable kindness of Srila Prabhupada.

He was so engaged, so busy, preaching to tens of thousands of people and taking care of our entire Society, yet he personally took charge of my recovery. To this day I become emotional just remembering this. For me it only increased my dedication to see that this small insignificant soul Yamuna was so cared for and nurtured by Srila Prabhupada.

In my later challenges, I drew strength and determination from this episode in my devotional life. Another thing I remember about the illness was the loving care of my Godsisters, among them Visakha devi and Chitralekha devi. I felt so grateful to have had not only the care and loving attention of my Spiritual Master, but also my Godsisters.

By now, more devotees were coming from the West to join our party, so we were near fifty. When it came time for the entire group to board the bus, I remember I wanted to try to see Srila Prabhupada as he was getting into his car. I was still extremely weak, and literally just back on my feet again after my extended illness.

So as I was coming around from the back side of the bus, Srila Prabhupada saw me. I paid my obeisances, and when I got up he inquired how I was doing. I said, “Thank you, Srila Prabhupada, for making so many wonderful arrangements for me; I am always thinking about you and how your programs are going on.”

So his car, of course, was filled with people, and still he said, “You are too weak to ride on the bus. You will ride in my car.” So he had one or two men leave the car, and we were all still scrunched in—so many of us—and I, of course, was the only woman in the car.

Srila Prabhupada was so kind in every circumstance. He made allowances for me to try to be comfortable by riding in the car with him instead of the bus.

So that ride was very wonderful. It was the first time that I physically accompanied Srila Prabhupada into the holy dhama of Vrindavan, the center of the spiritual world.

He said, “Wait! Wait!” He called her, knowing that she was very sick, and told the men to get out. Then he had her get in the back seat with Guru das and one other man—Prabhupada was in the front with the driver—and the other men went on the bus.
.
.
Yamuna Devi: A Life of Unalloyed Devotion: Part 1: Preparing an Offering of Love.

Bhagavad Gita As It Is - foundation for peace and happiness of the world
Srila Prabhupada: Just do it!