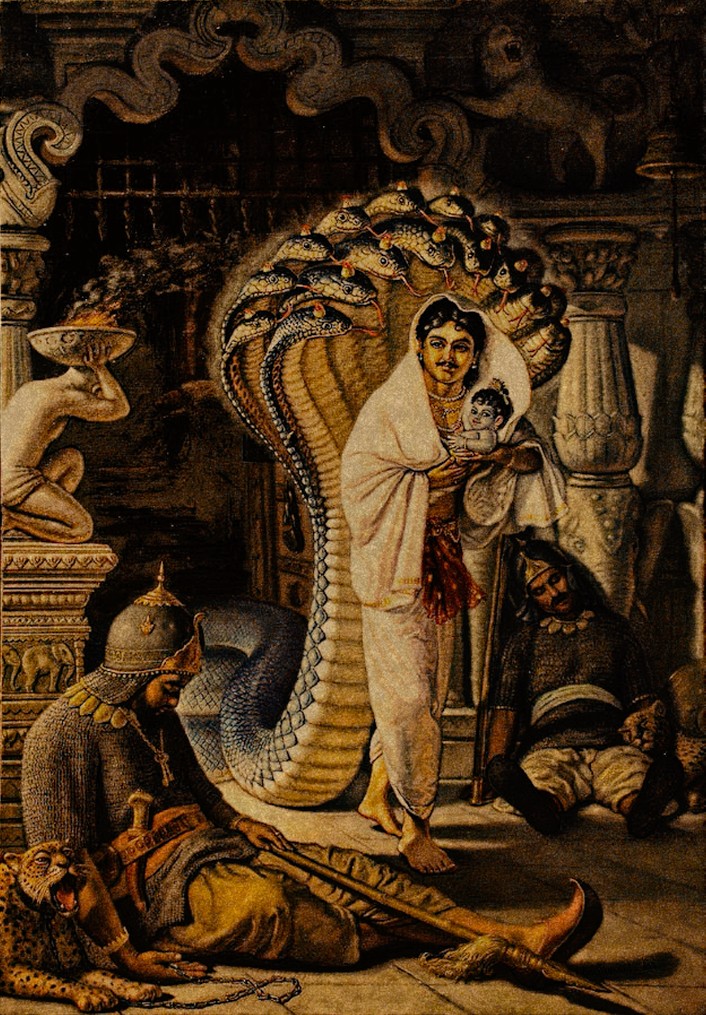 Mother earth was burdened, laden with grief,
when all the gods gathered to pray for relief.
From high in the universe their descent was grand,
as the Lord’s pastimes were about to expand.

When Vasudeva rode with his new bride
on a chariot bedecked with gold,
There was heard a voice vibrating in the sky,
and the future was thus fortold.

“O weak hearted Kamsa your know not what your do,
escorting your sister away.
Her eighth son will be the death of you,
no matter how hard you pray.”

The Lord, would appear as Vasudeva’s son,
this prediction was made at his birth,
And transfer Himself from His father’s heart,
to protect the devotees, and save Mother earth.

Cruel Kamsa could not bear to think of his death
so to save himself from trepidation,
He imprisioned his sister and brother-in-law
To fulfill Vasudeva’s foreboding stipulation.

A moment of kindness touched the demon’s heart
declaring “this boy’s not the eighth son.”
But then changed his mind as evil played its part
And declared, “kill them all!” it could be any one.

In Devaki’s womb, the Lord chose to reside,
through lifetimes of penance it became purified.
Ananta Deva made ready this sacred place,
For Krsna to rest in all of His grace.

Devaki sat in a grim prison cell,
when the gods came to offer prayers to the Lord,
But as her beauty cast a radiant spell
Kamsa marched in with his sword…

Twas the night of Janamastami and all through the jail
The guards were asleep wrapped Yogamaya’s veil.
Only Kamsa lay awake in anxiety and dread
For when Krsna was born he soon would be dead.

Vasudeva and Devaki effulgent and bright,
their chains and bolted doors dismantled to their delight.
The Lord became visible to His devotees sweet sight
As they beheld their divine son who appeared that blessed night.

In his mind Vasudeva gave thousands of cows,
his heart was overwhelmed with joy,
To celebrate that auspicious occasion,
the birth of his all-mighty boy.

With helmet and four arms and jeweled necklace clad
The Lord baby Visnu implored, “Please don’t be sad.
Life times before you prayed for the Supreme as your son,
Who has now come to save you, His lila begun.”

As natural affection arose in their hearts
The parents of God begged Him to hide,
Before the hours of night time departs
And Kamsa approaches in his deadly stride.

Within an instant the Lord changed His form,
Then bid his father go into the storm,
And carry Him to Braja in a basket on his head,
Across the raging Yamuna by moonlight be led.
Protected by Sesa Naga with hoods fully spread,
And deliver Him to Yasoda in her maturnity bed.

On the next morn Yasoda awoke
beholding the babe at her side.
He is the shelter of her motherly love
and the source of her transcendental pride.

Whomever understands the deep meaning of the Lord’s divine birth,
and appreciates it recitation,
Will know the pure love as it’s practiced above,
this realm of Maya’s flirtation.

“One who knows the transcendental nature of My appearance and activities does not, upon leaving the body, take his birth again in this material world, but attains My eternal abode, O Arjuna.” (Bg. 4.9)

As Pearls Are Strung