Krishna give us Guidance, Oh Lord we need that now 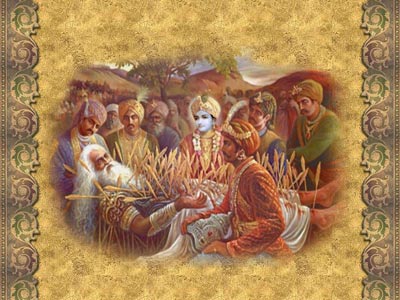 How can we always know that the decisions we take are the correct ones? That they are pleasing to both guru and Krishna?

Such questions are simultaneously easy, yet difficult to answer and even more difficult when it comes to practical application. One such area that falls into this category is when a senior devotee falls from the highest standard of spiritual practice and how our society deals with it.

In a simple sense once a devotee falls down then they are fallen, and while no vaisnava would wish to make their existence more difficult than it is, while fallen, they would have to be relieved of any responsible position or role.

But how to do that without disgracing the person involved and what was the example given to us by Srila Prabhupada in this regard?

In a general sense Prabhupada was very clear about this issue:

“In brahma-sukha one is no longer attracted by lusty desires. Indeed, when one is no longer disturbed, especially by lusty desires for sexual indulgence, he is fit to become a sannyasi. Otherwise, one should not accept the sannyasa order. If one accepts sannyasa at an immature stage, there is every possibility of his being attracted by women and lusty desires and thus again becoming a so-called grhastha or a victim of women. Such a person is most shameless, and he is called vantasi, or one who eats that which he has already vomited. He certainly leads a condemned life. In our Krsna consciousness movement it is advised, therefore, that the sannyasis and brahmacaris keep strictly aloof from the association of women so that there will be no chance of their falling down again as victims of lusty desires.” SB 7.15.37 Purport

So that is clear enough, if we take to the spiritual path and in particular if we enter the sannyasa asrama, then failure is not really an option, as it both discredits us, discredits the asrama and calls into serious question our motive and honour as far as entering this asrama in the first place.

It doesn’t take a genius to work out why the standards are so high. From a social and cultural point of view – all over the world – those in the religious/spiritual order of life are afforded so much respect. This respect is given on the basis of trust. So a rabbi in a Jewish community, a priest in a Christian community, an imam in a Muslim community or a sannyasi in Vaisnava community are automatically afforded so much reverence purely as a result of the dress they wear. Therefore if they do not live up to the basic standards required of that way of life they have voluntary accepted, then the mercy, or lack of it, awaits;

Prabhupada: “There is a temple, Tarakesvara, in Hoogli district. So Lord Siva… So people, I mean to say, pray that “If my this disease is cured or if I get this victory, I shall become a sannyasi for a month.” (laughs) So that system is going on. They become sannyasis for one month. There are hundreds and thousands. This is called “one month sannyasi” That is not mentioned in the sastra, but it has come into custom and if he returns, he is called vantasi, yes, “eating the vomit.” Conversation April 14th 1974

Notwithstanding the above it doesn’t necessarily follow that the best course of action is to publically expose every fallen sannyasi, particularly if their motive was not as shallow as mentioned in the above quote. In ISKCON’s case most, if not all sannyasis, enter this asrama with a sincere desire to help with Prabhupada’s mission of spreading Krsna consciousness. Prabhupada once said to be surprised at those that stay, not at those that leave, so it is hardly surprising that there are some casualties. Prabhupada both understood and dealt with this situation sensitively and very much practiced what he preached. What follows is Prabhupada’s reaction when he heard the news that Madhuvisa’s difficulties had become public within ISKCON.

“Pusta Krsna Maharaja spent a long time on the phone in the evening, informing all the temples in Madhudvisa’s zone on the East Coast that he has fallen and he is no longer the GBC. However, when he came in to report his actions to Srila Prabhupada, Prabhupada was angry. Prabhupada was made aware of the initial suspicions in Australia, but his idea had been to keep the affair quiet until he reached New York, where he could see Madhudvisa personally and attempt to clear everything up without a scandal. He wanted to save him, and he was upset that news of Madhudvisa’s falldown was now widespread. He rebuked Pusta Krsna. “Now you have made it impossible for him to return.”

He was also angry with Gurukrpa Swami. “That Gurukrpa! I told him not to tell anyone.” Although Prabhupada found no fault in Tamal Krishna’s approaching Madhudvisa because he had done it as a friend, he said that Gurukrpa had disobeyed him by discussing it with Tamal.” A Transcendental Diary Volume 2.

One thing that is interesting to note is that ISKCON’s current leaders do not have the same scope for following this example of Prabhupada’s. The dynamic surrounding this issue is the same so naturally the leaders want to follow the example of Prabhupada but often when they do they are charged with being in an ‘old boys club’ and engaged in a cover up! In the above example both Pusta Krsna and Gurukrpa are being rebuked by Prabhupada for doing the very thing that today’s leaders come under a lot of pressure to do – make everything public.

Some years ago one leader told me an interesting story that highlights this point. One of his senior managers/preachers in his area of responsibility was having some difficulty and had had a recent fall down. This leader, in consultation with a few senior god brothers, decided a course of action and rectification with the explicit aim of strengthening this devotees spiritual life and hopefully have him return to his regular duties as soon as it was clear that he had fully recovered from his difficulties. While the devotee involved was undergoing his rehabilitation, some news of his difficulties somehow became known to a few others. At this point these other devotees approached the leader dealing with the situation and asked him for clarification regarding the rumours. The leader concerned felt he now had to inform these devotees as they were also senior men. After explaining the situation these devotees expressed a little upset at the fact that they had not been informed earlier and felt that the leader concerned should have been more open and not just shared this situation with a couple of senior god brothers. The leader concerned expressed his difficulty in wanting to deal with the situation but not overly exposing it thus making it very difficult and humiliating for the devotee at the centre of it all. While they understood his motive the devotees still felt there was something of a ‘cover up’ involved. At that point the leader apologised for any shortcomings in his approach to this difficult situation and then asked the devotees what should be done now, should all the devotees of the yatra now be informed, given that all the leaders now know and also their expressed concern about not covering things up? The reaction of the devotees was quite interesting, notwithstanding their upset about initially not being informed of this issue, they now did not want it further publicised and felt (for all the same reasons that dictated the original course of action) that best, particularly for the devotee and the success of his rectification, that the yatra should not be informed. It was then pointed out to these devotees – have they now joined the ‘old boys club’ and are they now part of a cover up!

So this story is very revealing in so far as how on one level we all want to be very open and deal with things in a way that matches our desire for integrity, honesty, morality, duty and freedom from duality. On the other hand it shows how, when faced with specific situations, there are many other considerations that come into play and very much muddy the waters.

We learn the following from none other than Bhismadeva, who has an entire Parva of the Mahabharata, the Shanti Parva, dedicated to his instructions on morality. In addition Lord Krsna says of Bhisma:

“When that great man leaves (Bhisma), so all kinds of knowledge about morality and duty will leave with him. No one can deliver instructions comparable to his, not even Me.” Mahabharata – translation by Krishna Dharma das

So Bhisma is indeed as high an authority on the subject of morality as we will find, and here is what Bhisma said when directly asked by Draupadi about her plight after the gambling match:

“O blessed lady, knowing that one who has no wealth of his own cannot stake that belonging to others, but knowing also that wives are always at the command of their husbands, I am unable to answer the point you raised. The ways of morality are subtle. Yudhisthira can abandon the whole world full of wealth, but he will never sacrifice morality. The Pandava played with Sakuni even though he knew that no one could defeat him at dice. He has staked and lost both himself and you, O princess. Therefore I am confused upon this matter.” Mahabharata – translation by Krishna Dharma das

I guess at the very least these quotes convey that dealing with these kinds of matters is never easy, never black and white, hence the title of this piece ‘Krishna give us guidance, oh Lord we need that now”.

We can but do our best and ultimately, as we learn from sastra, the truth will be revealed according to time, place and circumstance and no doubt Krishna will reveal, in any given situation, what each individual needs to know and what is best for all concerned, in due course.

39 Responses to “Krishna give us Guidance, Oh Lord we need that now”