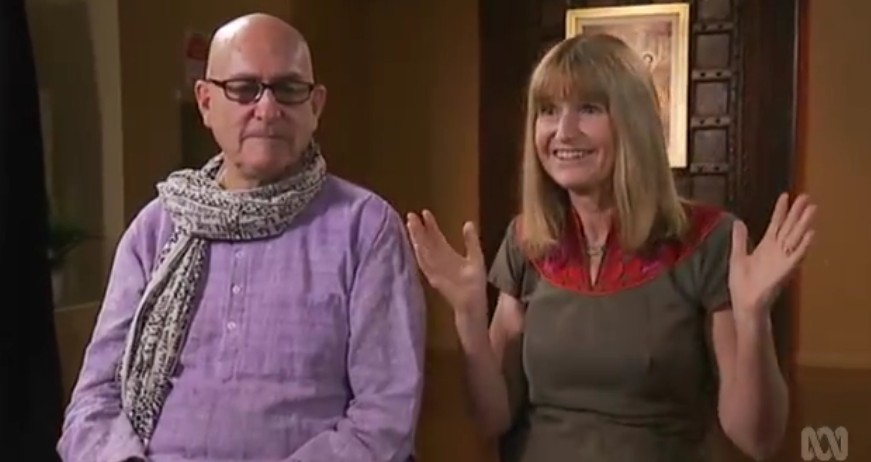 The ABC National Australian Television Channel have produced at 5 part series entitled “For better or worse” examining the different aspects that make up a life long successful, happy marriage. The series comprises 5 half hour episodes screening on consecutive Sunday’s at prime time, 6:30pm. The first episode goes to air on Sunday 20th September. The series will be aired on the ABC’s regular weekly program titled “Compass” which produces intelligent documentaries for the thoughtful person.

Pratapana dasa & Jayasri dasi of the Sydney Govindas’ community are featured prominently through out the series, representing a Hare Krishna couple who had an arranged marriage and who are still happily married after 35 years. Much of the footage showcases different aspects of the Hare Krishna lifestyle including the street harinams (which is featured in the ABC’s trailer promoting the series), the morning ashram spiritual program, kirtan evenings, Govindas restaurant and so on.

The program will be televised nationally (with ABC’s international networks) taking Krishna Consciousness into millions of homes.

Can you imagine not meeting your husband/wife before the wedding? Hare Krishnas Jayasri (Janet) and Pratapana’s (Tony) first words to each other were “I do”, when they met at the altar of their arranged marriage in 1981. See how they've kept their marriage going in For Better For Worse on Compass Sunday, 6.30pm

Kirtan Fest 2015 - 24 hours of kirtan in the City of Leicester
Where is My Free Will?

Dedicated to all the volunteers at Bhaktivedanta Manor