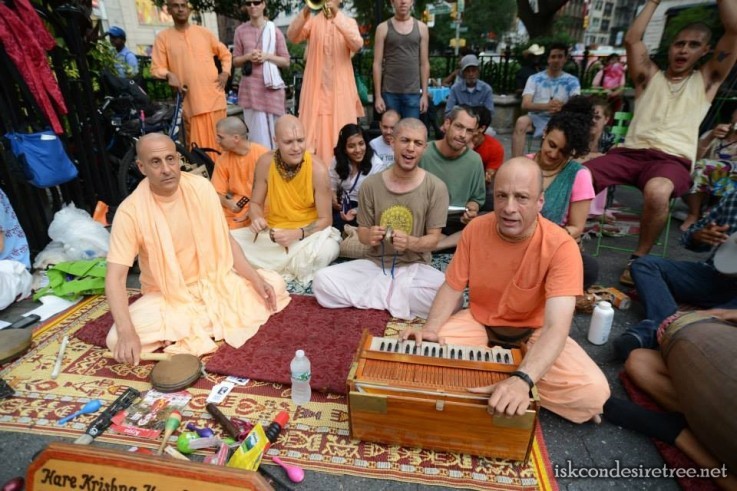 Right now, this moment in Harinam Sankirtana, the Maha Mantra rises. The kirtan leader was born a devotee – blessed by the commitment of his parents and the mercy of Srila Prabhupada. The volume is high, the beats are many per minute. The devotees are all swimming with the current. The commuters are now running – it is rush hour in New York.

Everyone is running. These busy people may not notice the devotees – it appears this way – but the inner ear, the Soul’s accomplice, has captured this Transcendental Sound. These Eternal moments are quick!

Lord Chaitanya said, “A moment will appear unto me as twelve years of time…” That’s what these moments are like, timeless, twelve years or more. God is time.

When these moments manifest, these tangible moments, when space and time are centripetal, forming something undecipherable and material sense can’t make sense of it, then everything ever baffling, or disturbing, suddenly dissolves or is explained. These moments are sense-filled; the Absolute Truth.

The 4AM wake-up call, Japa time, constantly working to serve…; this is the process of self-realization (an amputation of false ego)… the way to those eternal, blissful moments!

Like all things spiritual, the fleeting moment that seems also like twelve years, a path emerges while the eye of the heart is constantly looking up, toward a desire for Love, the Absolute Truth.

A man with a swollen head passes by. He snatches “The Reservoir of Pleasure” and looks, intently at Krsna. His caretaker tries to remove the pamphlet from the man’s pinched fingers without success. The man is hearing the Maha Mantra as he stares at Krsna. Krsna stares back.

Another man passes by. He is at least 7-feet tall and ghost-white. Slowly, he walks, slowly he turns his head back toward the chanting Harinam. He looks like a newly dead cadaver. He limps. His left leg, from the knee down, is four sizes larger than the right and twisted around. He drags it as he limps. It has been raining outside, so a water trail follows. Inquiry reveals his story: This man went to the hospital for a routine surgery during which a mishap created the current circumstance in which he hangs on to life by a thin, short thread. What is certain: death and that he has heard the transcendental sound vibration.

A woman has stopped in front of the kirtan. Stunned by the Sound Vibration, she stares at the devotees. It seems like she can’t look away, she can’t move. Some minutes go by. Just as she is leaving, a devotee approaches to speak with her about Prabhupada’s books. Her daughter died earlier in the day and here and now she has found herself face to face with the chanting devotees, Lord Chaitanya’s Kali Yuga revolution army begs the question: how will you spend the last minutes of your life, your last breaths?

Every syllable is an eternal embrace, a call homeward.

For those who don’t stop or don’t know or don’t care or don’t want to care, for everyone who passes by, the inner ear unpacks these sound vibrations, drops them into the hearers Consciousness. Dear people. We chose this mess. Dear, dear people… All of us tormented by our own “wildest desires”!

Prabhupada didn’t retire, he didn’t take a vacation, he didn’t go to the spa in the mountains for a retreat or rest. Dear Srila Prabhupada.

Lord Chaitanya gave us Haridas Thakur – a “lowlife” according to society, the eyes of the material mind. We, shattered bags of bones, we are the Haridsa Thakurs and now we too are set free. Chaitanya Mahaprabhu’s mercy.

We chant. We feast. “We do it all over again tomorrow,” Rama Raya Prabhu’s closing.

As the bodies walk by, the Transcendental Sound Vibration goes with them… into their homes, into their visions and dreams, into their speech, their consciousnesses.

It’s easy to see when someone stops and shaves his head or throws out her jeans. Even this is rare but, we see it. What we don’t see is twenty years from now… Now, the Maha Mantra calls a person back to the literature table for a Bhagavad Gita; that Gita goes with the person and is placed in a bookcase where it waits for twenty years when a grandchild happens upon it on a dark and windy day. We don’t see this. We don’t see the tiny hands of a toddler flipping through the Gita haphazardly and then stops to stare at the picture of Krishna driving Arjuna’s chariot.

How could we see that child’s Soul, influenced forever by the Absolute Truth. This impact is almost inconceivable and yet we do hear the stories.

A 14-year-old sits chanting on the consciously selected Kirtan mat; she knows all the bajans; she recites slokas in Sanskrit. None of us know where we will end up next or in what body, in what time or circumstance. But thousands of Eternal Souls take the Maha Mantra with them. Rama Raya has unstoppable devotion and unfaltering dedication and the chanting devotees have something worthy to do with their human lives!

There’s a girl now, she approaches the literature table at a moment when a dear, senior devotee is there attending. What mercy!

Crocheted flowers adorn her crocheted bag, she wears a pretty winter hat atop her sweet head. For a small donation, she takes a Gita. She is smiling as she speaks with the devotee, her head is bobbing, her body sways, her feet tap with the mridanga’s divine, universal beat as if it has become one with her heart’s beat instantly.

When she leaves, she bows with palms together at heart level. Across the platform, ascending the stairs, off to her next destination but a different person now, she raises her arms Nityananda-style; one hand is bejeweled with a Bhagavad Gita.

The day ends so we can do it again tomorrow.

Do We Complain Too Much?
Her Grace Labangalatika Dasi ACBSP left her body. Nirguna Dasi:...