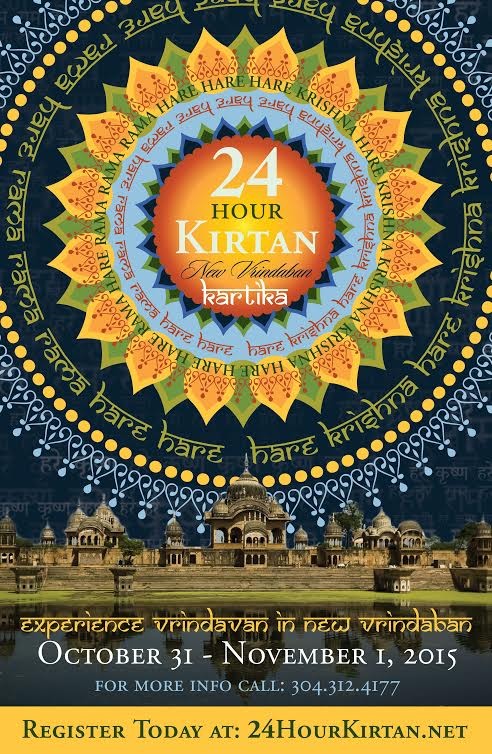 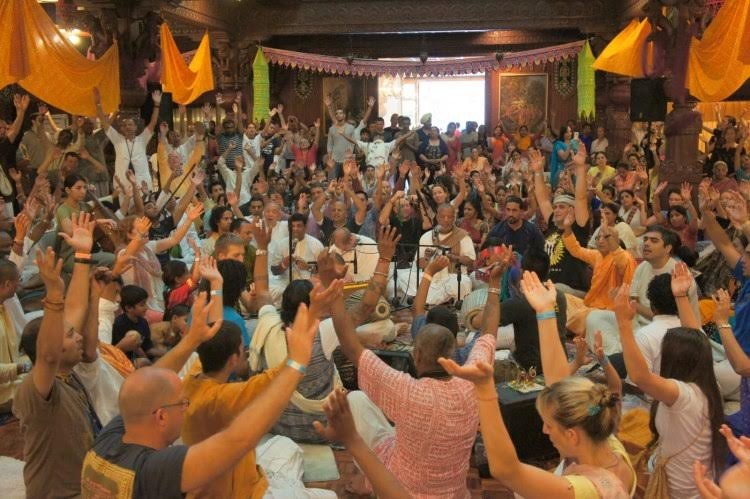 By Madhava Smullen
New Vrindaban’s autumn 24 Hour Kirtan – held during the sacred month of Kartik — is rapidly catching up to its summer cousin in popularity. Up from 100 attendees in 2011, this year’s festival is expected to attract over 400, looking for the authentic Vrindavan Kartik experience without having to travel seven-and-a-half thousand miles.
“Many devotees go to the original Vrindavan in India for Kartik,” says organizer Vrindavan Das. “But they can also get the same experience and benefit in New Vrindaban – as Srila Prabhupada often said, ‘New Vrindaban is non-different from Vrindavan.’”
ISKCON devotees will arrive from Toronto, Montreal, New York, Baltimore, Washington D.C. , Detroit, Columbus, Pittsburgh, Atlanta, Chicago and beyond. They’ll be joined by several student groups from local schools like West Virginia University and Cincinnati State Community College, eager to see what the increasingly popular practice of kirtan is all about.
A special inauguration kirtan will set the tone on Friday October 30th from 6pm to 9pm at Prabhupada’s Palace, where devotees will seek the ISKCON Founder-Acharya’s blessings.
At 9:30 the next morning, everyone will gather outside Radha-Vrindabanchandra’s temple for a tour of Vrindavan’s holy places: Kusum Sarovara, Manasi Ganga, Radha Kunda, Shyama Kunda, Radha Gopinath Mandir, and Govardhana Hill, which have all revealed themselves at New Vrindaban too. At each spot, senior devotees will tell stories of the Lord’s pastimes. And of course, no Vrindavan experience can be complete without a visit to Krishna’s cows at His goshala.
Next there’ll be a large Harinama Sankirtana procession to Prabhupada’s Palace, where devotees will see the bongo drum Srila Prabhupada played at the Western world’s first public kirtan in Tompkins Square Park, New York. They’ll then escort the drum to Radha Vrindabanchandra’s temple, where the 24 Hour Kirtan will officially begin at 10:00am.
A host of renowned kirtaniyas will lead the chanting, switching every hour or half hour, including Ajamila, Agnideva, Amala Kirtan, Amala Harinam, Bhaktimarga Swami, and Karnamrita Dasi – who is originally from New Vrindaban. They’ll be joined by resident kirtaniyas Rupanuga, Lilasuka, Ananda Vidya and others, as well as a special one-hour kids’ kirtan.
Throughout the day, devotees will offer ghee lamps to a special form of baby Damodar and His mother Yashoda – but the highlights will be the 8:00am and 8:30pm group lamp offerings while the Damodarastakam prayers are chanted. The bonding created by hundreds of devotees offering their glowing golden lamps together in the cosy warmth of the temple room, safe from the chilly autumn weather, encapsulates the sweetness of the Kartik 24 Hour Kirtan.
“There is a transcendental Vrindavan atmosphere,” Vrindavan says. “You can feel that the room is filled with love and devotion for the Lord and his devotees.”
Meanwhile, delicious prasadam breakfast, lunch and evening snack will be served, along with hot tea; and spontaneous sangas with devotees discussing the Lord’s pastimes or reading the “Krsna” book together will pop up throughout the day alongside the kirtan.
The chanting will continue through the night, and finally end at 11 o’clock on Sunday morning.

Reflecting on Half a Century
GBC College: Second Residential Completed