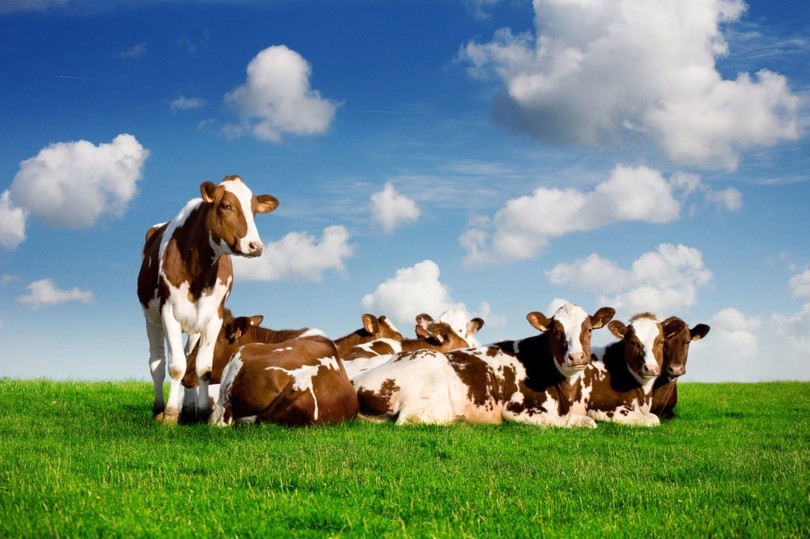 Question: I was reading your question and answer section on “Cow’s milk” (Digest 19B), because I recently got some information that the cow’s milk in America comes at the expense of a lot of suffering. The cows are fed hormones and other things so they could give more milk, which makes them suffer a considerable amount.

Now, I know that there are foods that Krishna has sanctioned that we can offer and eat, and milk is one of those. But how do I convince myself that the milk is okay to drink, even though it has come with so much suffering?

I know about the hormone free milk, but the devotees I initially heard this topic from say that it is a lie. I have since stopped drinking milk because it is too much for me to think that a cow suffered like anything to give it. So many temples still use regular cow’s milk. Are we taking part in the suffering? But we still offer it to Krishna, so doesn’t that burn up the karma? …. Help!

Answer by Romapada Swami: Your compassionate question reflects your soft-heartedness. Srila Prabhupada says in the pages of Bhagavatam that it is “simply horrible” for a pure-hearted soul to see the suffering inflicted upon innocent creatures, particularly mother cow. He would sometimes have tears in his eyes while speaking about the plight of cows – it was something that he felt very deeply about.

But the way he responded to it in practical terms was to vigorously propagate the transcendental knowledge and culture of Srimad Bhagavatam. He understood that the root cause of these evils was the spiritual decadence and ignorance of the population due to the influence of Kali. And he was convinced that without addressing this root cause, any other response to it will fall short of the mark.

In fact, the Bhagavatam predicts that one of the principal symptoms of the age of Kali would be that offenseless entities like the cow will be mistreated and exploited. And the Bhagavatam also gives us the most effective principles and practical means by which we can actually counteract these evils of Kali. You can read about it in SB Canto 1, Ch 17 – in connection to how Maharaja Pariksit responded to Kali who was surreptitiously hurting a cow and bull.

Such cruelty towards cows prevails not only in America, but in fact all over the world at present, due to our increasingly industrialized and commercialized civilization. Our so-called advanced industrial culture and profit-based-economy are essentially based on exploitation of the weak and innocent. Not only cow’s milk, but almost every aspect of our life is invaded by violence in today’s exploitative world. Even our grains and fruits are meddled with GMOs! Similarly there are so many very insidious and deep-rooted problems afflicting all aspects of our life.

Thus, simply abstaining from cow milk by a few is not likely to have much impact in actually helping the suffering cows or in addressing the deeper issues. A reactive approach seldom offers lasting solution to any problem — in other words, when something is done solely as a reaction to some anomaly without being based on a fundamentally higher principle, it often fails to address the issue, and could even create more problems than what it was intended to fix. And how could we possibly react to all of these other countless problems as hinted above without endlessly complicating our lives? We can appreciate from Srila Prabhupada’s example that he was never reactive; rather he taught and conducted himself on the basis of higher spiritual principles, applying the absolute wisdom of Vedic knowledge. And thus his solutions are proving to be most effective, lasting and ultimately satisfying.

Rather than abstaining from milk, offering the milk to Krishna with devotion as you have suggested not just frees us from karma, but more importantly it could spiritually benefit the cow that gave the milk! Our purpose in this is not to justify ourselves or to resign ourselves thinking that the suffering of cows is inevitable, but rather to make the best use of a bad bargain.

A sincere devotee must, and does, make heartfelt effort to live a progressively simple life and abstain from using unnecessary commodities and comforts obtained at the expense of cruelty to other living entities. For example, we can avoid using leather goods, avoid reading junk literatures and newspapers published at the cost of cutting millions of trees, and so on. As far as milk is concerned, however, not only is it important for healthy development of body and intellect, but is also an essential ingredient for performing sacrifice to Vishnu. Milk and milk-products like yogurt and ghee are not just sanctioned foods but are especially very dear to Krishna and important for human civilization. For this reason, we can accept milk, after offering milk to the Deity – in service to Krishna, under the direction of our founder-acarya.

Milk obtained from cows not treated with artificial growth hormones may prove a better alternative. Yet, there are no rigorous standards to determine its implementation, and as is often the case, different groups have different opinions on its practical implementation – each of which are based on their own vested interests and ideology. In any case, we must be forewarned that as soon as there is commercialization, it is bound to be at the cost of unethical exploitation. Srila Prabhupada would therefore strongly insist on distinguishing between “cattle raising” versus “cow-protection”. In other words, it may be nice to encourage dairy-farms that avoid artificial growth hormones, but because it is a reactive approach and is still based on consumerism and profit-making, we can take it for granted that there is bound to be exploitation if only of a slightly lesser degree, as opposed to simple farm communities where cows are protected and cared for without ulterior business motives. Thus the only real solution is to restore a God-conscious civilization that values cow-protection.

We can see from Srila Prabhupada’s example, that although cow-protection was very close to his heart, where he in fact had direct knowledge of the same set of facts as you, he himself did not give up drinking milk.

Instead his response was to work very hard to educate people about cow protection. He wrote profusely and very appealingly about it in his books. He trained his western followers to appreciate the value of a civilization and economy based on cow-protection. He fascinated them by showing how to use milk-products to produce a variety of healthy and delicious foods and the transcendental benefits of offering them to Krishna in devotion. He inspired the establishment of model farm communities to demonstrate the merit of caring for cows. Whenever he met with prominent religionists or social leaders, he seized the opportunity to emphasize this idea and got his guests to reflect on the evil of exploiting and killing mother cow. He presented it not as a religious sentiment or dogma, but in a very scientific and logical manner he showed the spiritual and even economic benefits.

We could say that his efforts and compassionate prayers were instrumental not only in making thousands of people in giving up cow-killing and meat-eating, but also in bringing about a significantly increased awareness and interest in vegetarianism around the world, a trend that was hardly popular or common-sight before Srila Prabhupada’s coming west.

The point I am trying to draw your attention to is this: the real and most effective solution to such issues lies in positive education and enlightenment of people, as Prabhupada demonstrated. Sure enough, it is not a pat-answer to your question; it will demand greater dedication and commitment and will take time; but it is a solution that is sure to have a deep and lasting impact.

If educated and thoughtful persons such as yourself would deeply understand and imbibe these principles of Bhagavatam that Srila Prabhupada taught, and contribute your best to disseminate this awareness of the value of cow-protection and a God-centered way of life, that will certainly prove to be a great service to the cause of the suffering cows and many such problems. Then, as Srila Prabhupada states, “there is absolute certainty of converting this hell of pandemonium to the transcendental abode of the Lord.”

Depending on Krsna’s Protection

The Purpose of Grihastha Ashrama