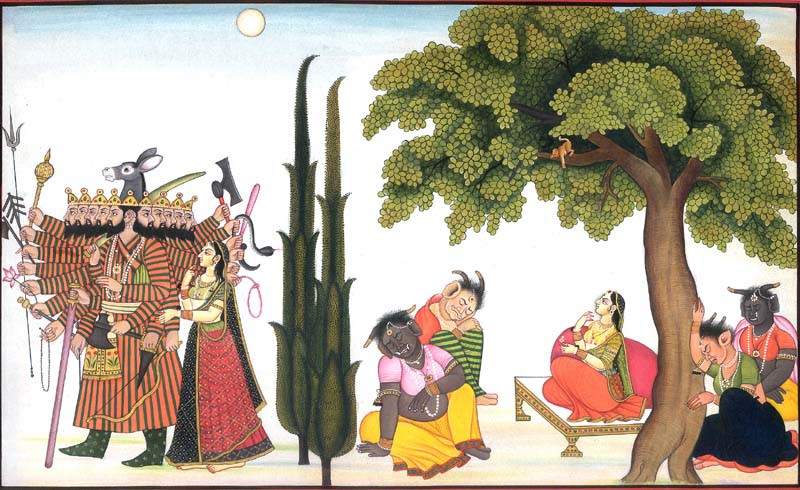 With just his tail, Hanuman effortlessly burned the entire city of Lanka. But he too wasn’t successful in burning the lust and ego of Ravana, the powerful king of Lanka. In fact Ravana’s real well wishers such as his brother Vibhishana and his chaste wife Mandodari had tried their best to counsel him several times against kidnapping Sita, wife of Lord Rama. Ravana not just refused to listen to them but he even humiliated them. Upon being reminded by Vibhishana that kidnapping someone else’s wife is an immoral act and he would suffer the consequences for this nefarious deed Ravana became mad with anger at his brother and threatened to kill him. He finally forced Vibhishana to leave his kingdom. Ravana thought he would succeed in killing Rama and would then forcibly enjoy with Sita.

Hanuman was just one of the soldiers of Lord Rama and had almost decimated the entire Lanka. Any sensible person would have easily gauged the strength of his opponent seeing the power of just one of the soldiers of his opponent. But lust and ego had created such a thick covering over Ravana’s intelligence that he was not able to see his imminent disaster. Just like Ravana we too want to enjoy the property of the Lord claiming to be ours. And when reminded that everything moving and non -moving in this world belongs to Lord we refuse to accept it and we start making plans to defeat the plans of the Lord. The material energy of the Lord keeps on demonstrating as how helpless we are in front of her. We see devastation everywhere in the form of flood, famine, earthquake, tsunami, war, deadly diseases and death. But like Ravana we refuse to learn from it and always think that with my efforts and prowess we will be able to subjugate the material world and will enjoy it by becoming the controller.

Lord Rama is the Supreme Personality of Godhead and for him to kill Ravana wasn’t difficult. He is the creator and maintainer of all and when required he destroys everything. But just like a father who always hope that one day his disobedient son would get reformed and will finally return to home, similarly Lord Rama the Supreme father was hoping that may be Ravana would give up his demoniac mentality and would come back to him. And this is why, he waited and through Hanuman and Angad sent him messages that he should act righteously else his end is certain.

Since the dawn of creation we have seen that the purpose of Lord’s appearance has never been just to annihilate the miscreants, this he can do very easily as he is the most powerful Personality in the entire creation. But most importantly Lord comes here to invite us back to the spiritual kingdom, our original home. And he is ever ready to take us back forgiving and forgetting our past misdeeds. When Vibhishana left Lanka and came to take shelter of Lord Rama then Lord Rama’s generals like Sugriva and others where against Lord giving shelter to the brother of his enemy. But Lord Rama happily welcomed Vibhishana and said that even if Ravana comes to him then he would accept him without any hesitation. This shows the magnanimity of the Supreme Lord. In fact in all his incarnations as Lord Krishna, as Lord Rama or as Lord Chaitanya he has exhibited this quality. When he appeared as Lord Krishna he said that “Abandon all varieties of religion and just surrender unto me. I will deliver you from all sinful reactions. Do no fear”. (Bhagavad Gita 18.66). He invited all to his abode and said that those who come to his kingdom will never take birth again in this material world. (Bhagavad Gita 15.6). When he appeared as Lord Chaitanya then he freely distributed his mercy to all, he even delivered ruffians like Jagai and Madhai by transforming their heart. Lord Chaitanya was so concerned about the well-being of all that he would ask Nityananda Prabhu and Haridas Thakura to go to everyone’s house and beg people to chant the names of Krishna so that people could be delivered from the miseries of material existence.

The Lord appears in this world to remind us about the spiritual abode wherein life is eternal and bliss is unlimited. He also sends his dear devotee to educate us that we can never be happy if we try to enjoy separately from Lord.

Ravana refused Rama’s invitation and met with annihilation. History clearly shows that no one till date have ever succeeded even remotely in living happily by going against the laws of Lord – Ravana, Duryodhana, Hiranyakasipu are few such examples. We too have choice, we can be either on the side of the Lord or we can go against the will of the Lord. If we go against the Lord then suffering is inevitable but if we are on the side of the Lord then victory, glory and happiness is guaranteed. The concluding verse of Bhagavad Gita 18.78 says that wherever there is the Supreme Lord, Krishna, there will also be certainly opulence, victory, extraordinary power and morality.

In Defense of the Vedic View
TOVP: 5-meter base relief panels for the 4 corner walls of the temple room

Guru? He will find you…