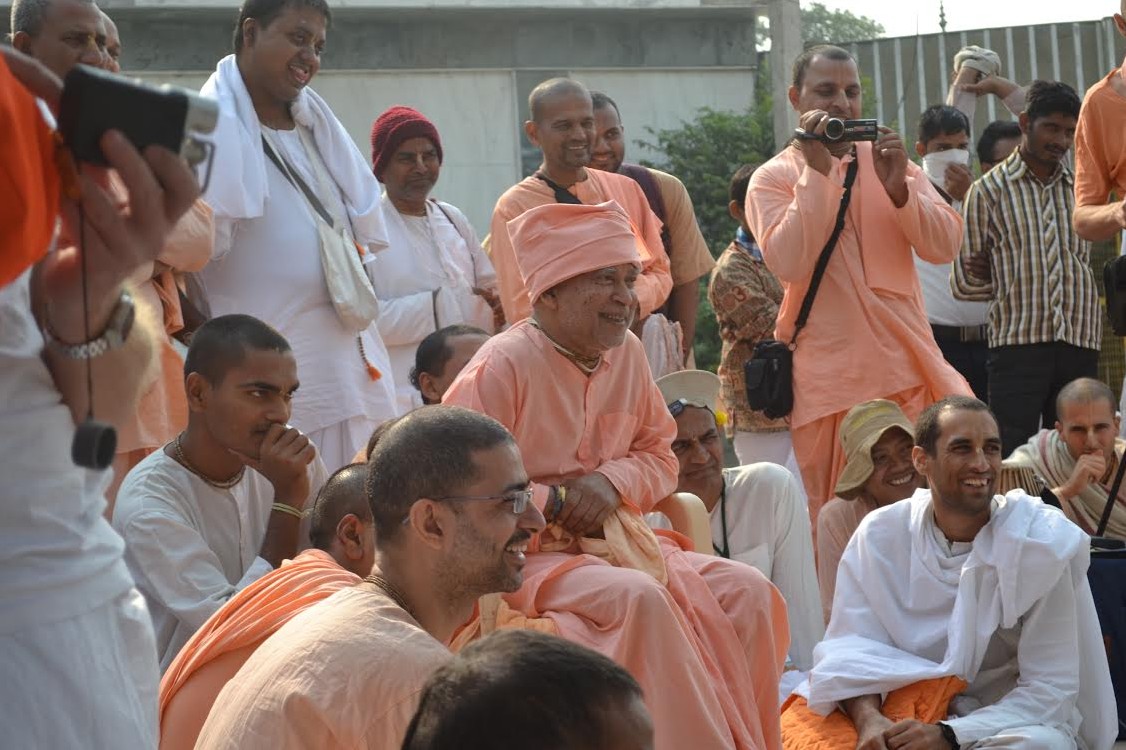 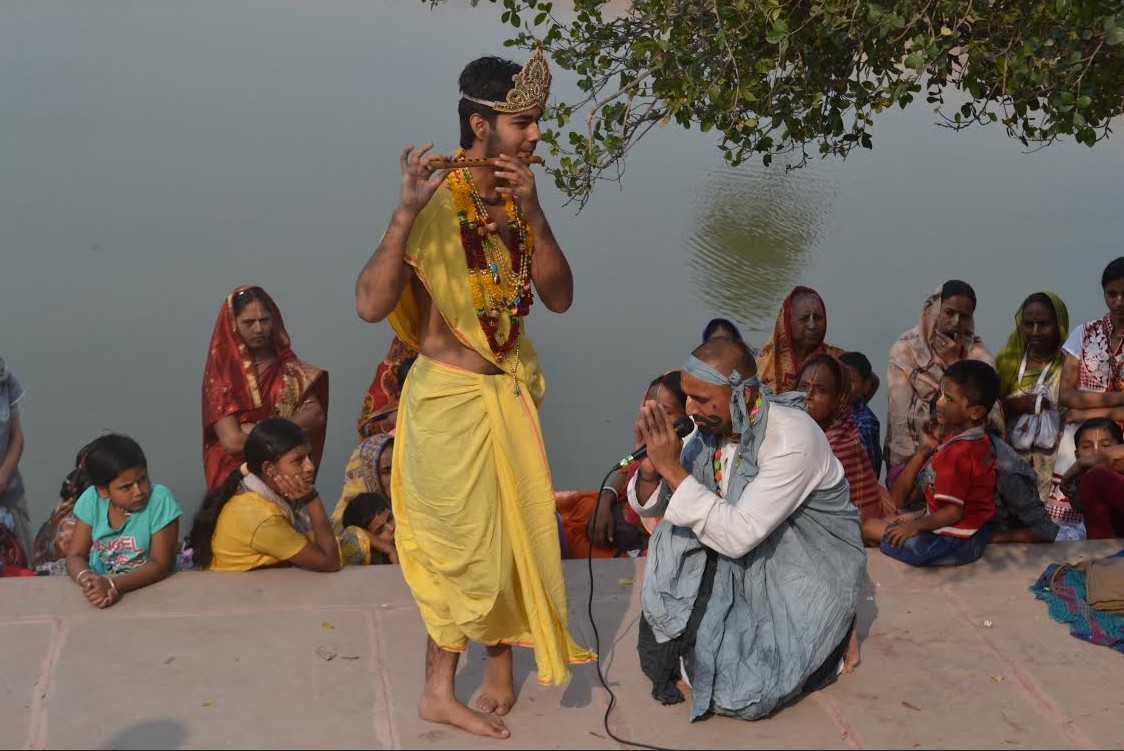 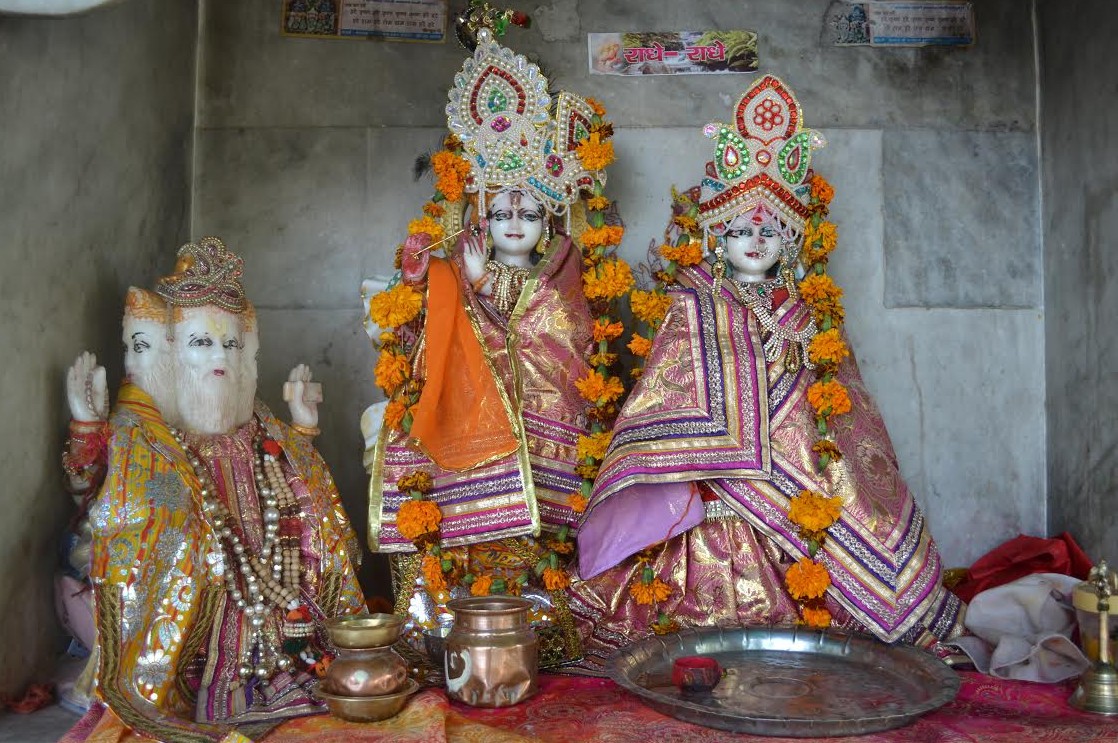 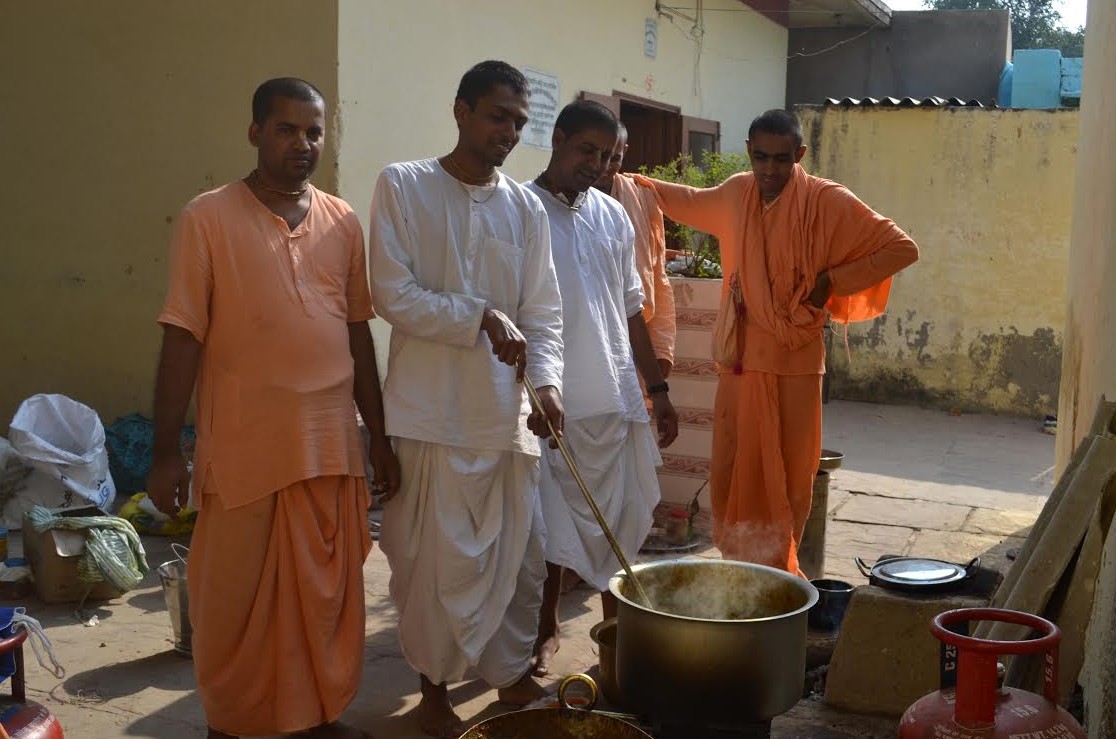 During the month of Kartik, many devotees assemble from various parts of the world to Vrindavan in order to recharge their spiritual battery. Parikrama allows an opportunity for devotees to nourish their bhakti through the medium of visiting various places of pastimes of the Lord, hearing of those pastimes from senior devotees and serving the vaisnavas. With this in mind, HH Subhag Swami Maharaj organised a series of programs in different places across Vraja during this holy month.

In preparation for Kartik Maas, on 26th October 2015, Maharaj took 170 devotees from a range of places across the globe to Maan Sarovar and Bhandiravan. Buses left from our ISKCON campus at 6am. Class was given by Maharaj on the banks of this most holy pond. The tears produced from Radharani, from her deep feelings of separation from Krishna formed this reservoir of water we see today. Maharaj mentioned that although feeling separation from the Lord is our goal, it can only be achieved when we stop sense gratification, as Srila Narottam Das Thakur states in his celebrated song:

“When my mind is completely purified, bring freed from material anxieties and desires, then i shall be able to understand Vrindavan and the conjugal love of Radha and Krishna, and then my spiritual; life will be successful.

After class, a wonderful drama entitled, “The Thief of Vrindavan” was performed. This story was familiar to all as it was told by our own Srila Prabhupada. In short the purport is that by association with Krishna, our senses and desires become purified, so much to the extent that we want nothing other than to serve the Lord.

A simple, but delicious breakfast was cooked by our devotees under the guidance of HG Asim das. Maharaj set an example of the mood of service when he personally came and served all the devotees prasad. All were very much inspired seeing Maharaj’s example.

After some brief time for resting and freshening up, we proceeded to Bandiravan. When Radha and Krishna were infants, Brahma performed a marriage ceremony uniting the two under the same banyan tree which stands there today. All were listening with rapt attention as Maharaj spoke on the significance of this particular forest. A little known fact that was revealed by a local resident: a sage of the name Bhandira, performed austerities here many thousands of years ago, thus the name Bhandiravan came into being.

After a short kirtan, all proceeded for lunch prasad. Wonderful feast prasadam awaited the devotees including Brijwasi roti and buttermilk. The Punjabi halava was especially appreciated. Brijwasi children were also called to honour Prasad with the devotees. Maharaj personally served them Prasad. Everyone left with a smile on their faces being completely satisfied. Buses then proceeded to Vrindavan, reaching at around 7pm and eagerly awaiting the next program.

We thank all those individuals who helped in serving: matajis who were cutting subji, the prabhus who spent long hours in the kitchen or those who gave a financial donation. Without their kind hearts’, the program would not be able to take place. Our gratitude to all the organisers for their expert guidance and co ordination, ensuring that the whole program ran smoothly. Special thanks to HH Subhag Maharaj for personally coming to attend the program and helping us to recharge our spiritual batteries much faster. Finally we thank Srila Prabhupada for revealing the holy dhama to us and giving us a glimpse of the spiritual world.