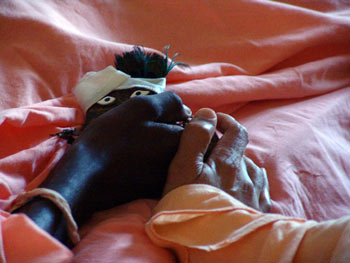 Bhakti-tirtha Maharaj emphasized so strongly the need of community, communities where men, women, and children of all nationalities, all castes, all religions could come together in a spirit of focusing our attention on the service of Guru and Krsna. Srila Prabhupada brought our lives together for this purpose and that was the mission of Bhakti-tirtha Swami Maharaj.

Srila Bhakti-tirtha Maharaj personally chose, of all places on this planet, to depart from this world here at Gita Nagari. Many of these flowers were grown right in his own project of Gita Nagari and absorbed his divine grace. It was his will that his ashes be put into a samadhi in Mayapur and that the flowers remain here at Gita Nagari, the special prominent place of his worship and service to Srila Prabhupada.

Today with very, very grateful hearts, we will weep in separation from this beloved Vaisnava and we will rejoice in memory of his glorious service. We will also very deeply ponder what he spoke, the example that he established, and try to keep that always in our own hearts.

As we are putting the spirit of Srila Bhakti-tirtha Maharaj in his samdhi in Gita Nagari in the form of these flowers, left us today take the flowers of his incredible example and love and place them forever within our hearts.

I welcome you. Thank you very much.

I thank His Holiness Radhanath Swami for welcoming all of you here to Gita Nagari . We thought it was most appropriate for Maharaj to be the first to address the assembly of devotees because he was one of the major caregivers for His Holiness Bhakti-tirtha Swami . And of course, among the caregivers, he was the greatest of caregivers and most qualified to honor and welcome you, the distinguished Vaisnavas, here.

The first person we would like to call is His Holiness Lokanath Swami.

Of course he would like to defer to one of the other godbrothers. Actually, we planned for someone else to speak first but he is not here. The next person we will ask is our GBC here in Gita Nagari and that is His Grace Ravindra Svarupa Prabhu to please come forward.

I first met Bhakti-tirtha Swami before he was Bhakti-tirtha Swami, Ghanasyama Prabhu. He came to our temple and he was part of the traveling library party organized by Satsvarupa Maharaj. I think he took second initiation at that time. In fact, I believe my wife was teaching him how to do arati and things like that at the same time. We started to get to know each other and immediately he was a very rare person that within a very few minutes one could start to talk on a very confidential level.

There is a French theologian named Simon Weil. One of the things she said that is very profound is that the only important question you can ask somebody is “What are you going through?” I found that when I started talking with Bhakti-tirtha Swami, Ghanasyama, very quickly we were sharing with each other what we were going through.

In those days in ISKCON, it was very rare to do that with people. Later on, I learned that was one of the loving exchanges between devotees to reveal one’s heart in confidence. Somehow or other, without previously meeting and talking, we began to talk to each other about what we were going through, our struggles and difficulties in Krsna consciousness, our realizations and so on. That was very unusual.

I once told this to a person who had been a priest in the Roman Catholic church for many years and he said, “Yeah, it’s the same with us.”

So our services kept us apart mostly and only occasionally we would come together. I found with Bhakti-tirtha Swami that whenever we’d come together we could start talking as if we’d never been apart. There was even a long period of time when we were somewhat estranged with each other due to the political situation in ISKCON, but when that was over, we were again together and it was as if nothing happened and I was happy to again be with my brother.

For me this was an unusual experience and I think the credit for being able to relate on such a level was owing to him. I think many other people had the same experience with him. There were so many wonderful things he did and showed us but for me the main thing was the establishment of a relationship with a devotee that was profoundly a relationship of two brothers where I could relate very deeply. Now again we are separate but I look forward to being able to associate again.

We’d like to thank His Grace Ravindra Svarupa Prabhu. My husband and I are playing tic-tac. He is actually allergic to the hay and this was his service, but this is the farm, and what can is say, we’re city people, we’re not accustomed to all the hay.

We want to thank our Guru Maharaj’s God family, especially his GBC godbrothers and godsister, Malati Prabhu. This was very important to him, to have that reciprocation from his God family. This was his prayer in the last days, he was just crying out to have the love of his God family. He was praying to Srila Prabhupada, “Whatever offenses I have done, please forgive me, Srila Prabhupada, and let that love between me and my God family flourish in ISKCON.” I think we see that today and we are so grateful to you because we know this is what he would have wanted.

We especially want to thank His Holiness Lokanath Maharaj from coming from wherever he was to be here with us today.

There are no words we can use to express our gratitude to all of you.

His Holiness Satsvarupa Maharaj has been here with us for the last three days. We want to thank you so much. Yesterday was the tithi date for our Guru Maharaj’s departure. Because we were also engaged in so many different services and we wanted to honor the Kulimela, in honoring that, we had to forego the tithi date, which was very great on our part to do that, but His Holiness Satsvarupa Maharaj shared with us twice during the day and had all the disciples of Bhakti-tirtha Maharaj just share some thoughts and reflections of our spiritual master. For us, Maharaj, that was a great boon and benediction and we want to thank you from the bottom of our hearts because on that day we had the opportunity to remember our spiritual master.

At this time we’d like to ask His Holiness Satsvarupa Maharaj to share a few things, memories about our Guru Maharaj. Can someone assist Maharaja?

Recently on occasions of speaking about Bhakti-tirtha Swami I’ve talked about very close early association with him on the library party when he was a rough gem, he was actually an unpolished gem, but he actually was a fully potent gem in his ability to sell books to college professors by hook or crook. I was asking the devotees to speak about the qualities of their spiritual master and one of them said he was never indecisive. I thought about the library party when Bhakti-tirtha Swami was Ghanasyama. He was never indecisive. When talking with the professors he always said the right thing to them and amazingly pulled something out of the hat to convince them he was a representative of the Bhaktivedanta Book Trust and that these books belong in their libraries. He was the best on the party by far. This lead to his more advanced preaching days in Africa.

All over the world in his spiritual master days, I think the most wonderful days of his manifest activities are the last days in which you all saw and heard from him when he was near his passing away. I’m surprised to hear more and more how many devotees came to see him here and in D.C. and how they were affected. He made a cathartic affect upon them. They cried to be with him and cleared up so many spiritual problems in their hearts just to be with him. I myself came very close to him in those days.

Ravindar Svarupa Prabhu just spoke about his relationship with Bhakti-tirtha Swami. I had a certain estranged period also which became completely healed during the period of his illness and I became close to him and phoned regularly.

On the video this morning he said how he had come close to understanding his relations with Krsna in one of our calls. He was aware that one has to be very careful of sahajiya tendencies, but he felt he had a relationship with Krsna as a cowherd boy and he told me this on the phone. I immediately sent him a copy from Krsna Culture of Brhad Bhagavatamrta which has so many cowherd boy pastimes. Sanatana Goswami writes about the perfection of Gopa Kumar becoming a cowherd boy and pastimes in Vrindavan I fedexed the book here the next day. Vrajaila told me how happy he was when the book got here and they began to read it at once. Radhanath Swami also began reading the book with Maharaj. Maybe it’s too public to talk like this but these are some of my memories of his last days, how he touched people personally who came to see him, how he brought them close to him and closer to Krsna

And now we all have an indelible impresion of him and a kind of legacy, whether godbrother or disciple, spiritually we all have a legacy to honor his loving sacrifice and to try to keep up the connection with him and come to these kinds of celebrations in his honor. Thank you very much, Hare Krsna.