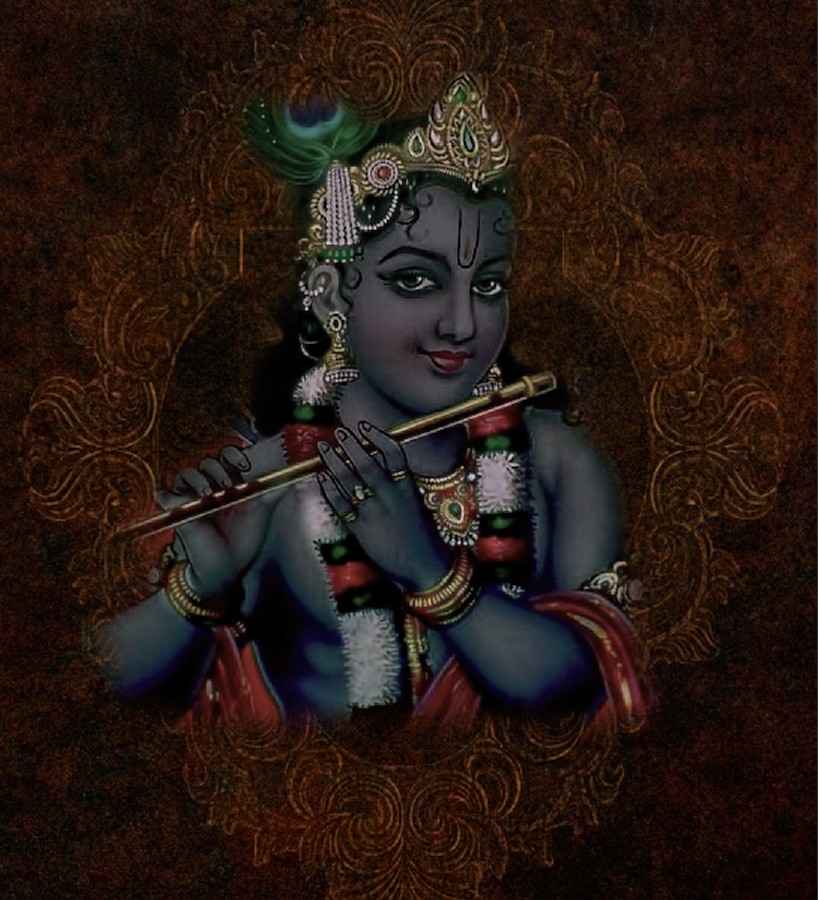 For centuries, Muslim poets have revealed their attraction to all-attractive Lord Krishna.

In Chaitanya-charitamrita (Madhya 22.80), Lord Chaitanya lists “poetic” as one of the twenty-six qualities of a Vaishnava, a devotee of Lord Krishna. He Himself demonstrates a poetic flair in His Sikshashtakam by using seven metaphors to elucidate the benefits of chanting the holy names of the Lord. The Supreme Lord is often referred to as Uttamahshloka: He who is praised with the choicest poetry. Great devotees like Sri Bilvamangala Thakura use poetic descriptions comparing Krishna’s hue to the fresh rain-cloud, His eyes to lotuses, and the rays from His toenails to soothing autumnal moons. These metaphors imply that Krishna consciousness is not lackluster, but poetic. With poetic expression a devotee poet succinctly deals with a variety of topics, including prayer, self-criticism, spiritual happiness, agony in separation from Krishna, the superiority of Vaishnavism, the guru/disciple relationship, residence in Vrindavan, and humility.

In Brahma-samhita (5.56) Lord Brahma poetically describes Lord Krishna’s home, Goloka Vrindavana, as the place where every step is a dance, every word is a song, and the ecstasy never ceases. Srimad-Bhagavatam (1.5.22) states, “Learned circles have positively concluded that the infallible purpose of the advancement of knowledge, namely austerities, study of the Vedas, sacrifice, chanting of hymns, and charity, culminates in the transcendental descriptions of the Lord, who is defined in choice poetry.” Srila Vyasadeva (the compiler of the Vedas), Valmiki (the author of the Ramayana), and Srila Krishnadasa Kaviraja Goswami (the author of Chaitanya-charitamrita) saw the Supreme Lord in their meditations and were directed to compose perfect shlokas, verses of exquisite poetry.

The Poetry of the Former Dabhir Khas

Rupa Goswami, a great poet and acharya in the line of Sri Chaitanya Mahaprabhu, was born in a brahmana family but worked for the Islamic government under Nawab Hussein Shah, the emperor of Bengal. Rupa was given the Persian title Dabhir Khas and endowed with great wealth and prestige. But in the eyes of the conservative Hindu society of sixteenth-century Bengal, he was deemed to have accepted the Islamic faith by dint of his close contact with the Muslim ruler. Lord Chaitanya and His followers, however, held him in the highest esteem, knowing him to be a superlative Vaishnava. In Chaitanya-charitamrita (Antya 1.195-198), Raya Ramananda, in a conversation with Sri Chaitanya, extols Rupa Goswami’s poetic descriptions by quoting an unnamed authority on poetry:

“’What use is a bowman’s arrow or a poet’s poetry if they penetrate the heart but do not cause the head to spin?'”

Then Raya Ramananda tells Lord Chaitanya, “Without Your mercy such poetic expressions would be impossible for an ordinary living being to write. My guess is that You have given him the power.”

Chaitanya-charitamrita continues: “Sri Chaitanya Mahaprabhu praised the metaphors and other literary ornaments of Srila Rupa Goswami’s transcendental poetry. Without such poetic attributes, He said, there is no possibility of preaching transcendental mellows.”

Earlier, Lord Chaitanya had said of Rupa’s poems, tomara krishna-rasa-kavya-sudha-sindhu: “Your exalted poetic depictions of the mellows of Krishna’s pastimes are like an ocean of nectar.” (Antya 1.179)

Innumerable poems about Lord Krishna are available in literature written by poets of Islamic background. Many of these authors, in the very least, were great admirers of Krishna. The persona of Lord Krishna – the fact that He is one without a second – attracts one and all, and many have described their feelings through poetry. Poets such as Abdul Rahim Khan-e-Khana, Rasa Khan, Uzir Beg, and Taaz Khan were great devotees of Lord Krishna, as evidenced by the sheer number of their poems that express intense love for Him.

To highlight the universality of bhakti and the trans-sectarian appeal of Krishna’s all-attractiveness, let us look at a handful of poems, including a poem each from Sayyed Martuza, Nazir Akbarabadi, and Hazrat Mohani. Many Muslim poets wrote in appreciation of Lord Krishna, but I’ve tried to unearth some of the rarer poems.

A Glimpse at Muslim Devotion to Krishna

Sayyed Martuza (1590-1662), a Muslim fakir born in the Murshidabad district of Bengal, wrote poems adoring Krishna. The style of his composition is simple and rhythmic. Here is his Bengali poem that was compiled in Pada-kalpa-taru by Satishchandra Raya in 1915:

Syama! O friend! My afflicted life is assuaged only by You
I cannot forget that auspicious day when I happened to meet You
As I beheld Your moonlike face, I was overcome by restlessness!
The soul of this unfortunate girl aches; in twenty-four minutes it dies ten times!
O my life – Kanu! Shower Your mercy; provide me shelter at Your feet
I have given up reputation and family tradition; I cannot live without You!
Sayyed Martuza submits at Kanu’s feet: please accept this request, O Hari!
Relinquishing everything, may he remain at Your feet in this body and beyond.

The following poem is by Maulana Chand Kazi, the Muslim magistrate of Navadvip during Lord Chaitanya’s time. Jatindramohan Bhattacharjya compiled this poem in his book Bangalar Baishnab-Bhabapanna Musalman Kabi, Second Edition, published in 1945.

The Forbidden Calling of the Flute

You do not know how to play the flute
Untimely You play it; my heart refuses any reason
When I am seated amongst the elders, You call out my name
Playing on the flute, embarrassing me to no end
As You play the flute from the other bank and I hear from here
Unfortunate lass I am, for I know not how to swim across
The grove whose bamboo makes the flute, be under my feet
Let it be uprooted by storm and set afloat in the Yamuna
Chand Kazi says, “As I listen to Your flute, I crumble down,
I won’t live; I won’t live if I don’t see my Hari.”

Born in 1869 in Jajpur, Orissa in a Muslim family, Uzir Beg grew up to be an acclaimed poet and wrote many simple and melodious bhajanas that show reverence for Lord Krishna. His anthology of poems on Lord Krishna is still popular in Orissa. His devotion is illustrated in this bhajana, included in Mohammed Yamin’s book Impact of Islam on Orissan Culture:

Worship and recite in praise of Lord Krishna. Only He can make you free from this worldly life, says this ignorant Beg Uzir. His holy name is the essence.

In the eighteenth century, a Muslim devotee and poetess named Taaz Khan regularly went to the Madana Mohana temple of Karoli, Rajasthan for darshana, to offer food, and to take prasada. Until she had darshana, she would not accept food or water. In one couplet (also quoted in Prof. Yamin’s book), she writes:

O son of Nanda, I am enchanted by Your sweet face. Although I am born a Muslim, I will remain a devotee of Yours always.

Abdul Rahim Khan-e-khana (1556-1627) was one of the “nine gems” (Navaratna) of the court of Emperor Akbar. In a 2007 Hindi book of Rahim’s poetry, titled Rahim-ke-dohe, Aabid Rizvi quotes the following doha (a couplet whose meaning is complete in itself) by Rahim:

The narrow-minded create trouble, and the large-hearted always forgive them. Says Rahim, even Lord Krishna forgave when the sage Bhrigu kicked Him.

Maulana Hazrat Mohani (1878-1951) was born in a modest Muslim zamindar family of Uttar Pradesh. He was a poet, journalist, and parliamentarian of British India, besides being a part of the Indian Independence Movement. He was at Pune, Maharashtra when Janmashtami came around in 1923, and he wrote this poem extolling Krishna.

My heart has fallen in love with Kana
Why would it think of anyone else now?
I looked for Him in Gokula and Vrindavan,
Let’s now go to Varshana and see if He’s there.
Hazrat, give up for Him all that is yours,
Then go to Mathura and become a renunciant.

Another poem, published by Hazrat himself in Kulliyat-e-Hazrat, reflects his desire to reside in Mathura.

Nazir Akbarabadi (1735-1830), a renowned Hindi poet, wrote a series of poems in praise of Sri Krishna. His famous poem Song of the Gypsies contains the refrain Sab thath para rah jaega jab lad chalega banjara: “All your pomp will be of no avail when the gypsy caravan [of life] packs up for the journey.”

Nazir writes that Krishna, the Supreme Lord, has no prescribed work but performs childhood pastimes. And although He is everyone’s father, He accepts a father and mother for pastimes. Here is a stanza of Nazir’s poem from the Hindi book Mahakavi Nazir:

Although some poems of Sayyed Martuza, Nazir Akbarabadi, and Maulana Hazrat Mohani reflect sincere appreciation of Lord Krishna’s persona, these authors wrote many poems on mundane matters, and unlike other poets I’ve mentioned, no evidence suggests they were practicing devotees of Lord Krishna for any significant length of time. Still, in their poems quoted here they do not seem to have violated Svarupa Damodara Goswami’s gold standard for devotional poetry:

“In the writings of so-called poets there is generally a possibility of overlapping transcendental mellows. When the mellows thus go against the conclusive understanding, no one likes to hear such poetry.” (Chaitanya-charitamrita, Antya 5.102)

One Muslim poet who became a practicing Vaishnava was Sayyed Ibrahim, better known as Rasa Khan, who lived in the sixteenth century. Attracted by Krishna, he moved to Vrindavan as a young man and spent the rest of his life there. He was initiated into the disciplic succession of Vallabhacharya. Rasa Khan wrote, “Worship Govinda the way a village woman carries a water jug.” His advice is worth heeding. It takes a great deal of concentration to carry a water jug on one’s head. Without being focused, a woman couldn’t carry the jug long distances. But with practice, the task becomes natural and effortless. Rasa Khan uses this metaphor to urge us to worship Govinda with an undeviated mind. Indeed, that is the perfection of life.

Please Don’t Be a Burden to the Earth

The Many Faces of Halva