Lakhs of Pilgrims throng Braj for Govardhan Puja. Over one lakh… 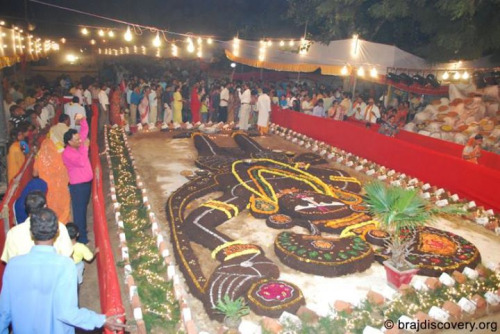 Lakhs of Pilgrims throng Braj for Govardhan Puja.
Over one lakh pilgrims thronged the ghats in Mathura and Vrindavan in Uttar Pradesh on Friday and took a dip in Yamuna river on the occasion of Bhai Dooj, officials said. Thousands of brothers and sisters congregated at the Vishram Ghat in Mathura for the special bath meant to appease the Hindu god of death, Yam Raj. Priest Yamuna Das Chaubey said the river is believed to be the sister of Yam Raj, and brothers and sisters should take a dip together on the day. “Only in Mathura, you have a temple of brother and sister,” he said. The Yamuna ghats in Vrindavan and Mathura were swept clean and barricades put up to regulate crowds. “Over one lakh pilgrims, including many NRIs, reached the ghats on Friday,” an official said. A shopkeeper near the Dwarkadheesh Temple said all hotels near the ghats were packed with devotees.
Read the entire article here: http://goo.gl/MUL7DU