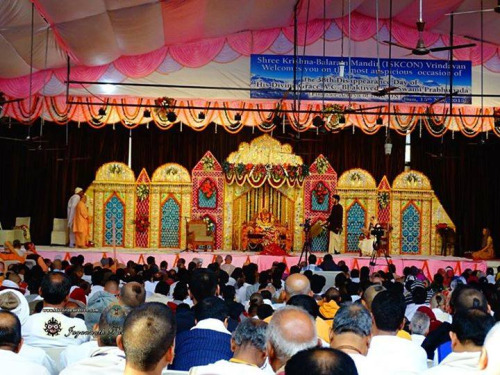 Vrindavan: Srila Prabhupada Abhishek on His Disappearance Day - 2015 (40 min video)
“The devotee is also dying, and the nondevotee, sinful man, is also dying. What is the difference?” So there is much difference. The example is given: just like a cat catching a rat in his mouth and at the same time carrying his cubs in the mouth. Superficially, we can see that the same mouth is being used, but one is feeling comfortable being carried by the mother, and another is feeling the death knell. Similarly, at the time of death, the devotee’s feeling that they are being transferred to Vaikuntha, whereas the ordinary sinful man is feeling that the Yamaraja, the dutas, the constables of Yamaraja are dragging him to the hellish condition of life. So one should not conclude simply by seeing that he is dying.
Watch it here: https://goo.gl/UX8t0T