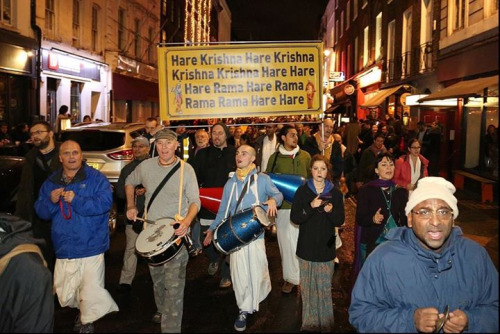 Maha Harinama Sankirtan Lifts London (Album with photos)
David: There was a subdued atmosphere in London on Saturday night, with fewer people on the streets and a visible police presence after the events in Paris the previous evening.
The devotees were out as usual though, in fact with an even larger sankirtan party than normal as we celebrated ahead of Srila Prabhupada’s Disappearance Day the following day.
One lady stopped me, mentioned the diversity of our group, and
commented about the positivity and happiness we were generating. She contrasted it to the mood of the previous two days and said they should put a clip of us on TV. There were tears in her eyes; clearly she had been touched by the devotees and (unbeknown to her) the power of the maha mantra.
Sri Harinama Sankirtan Yajna Ki Jaya! Srila Prabhupada Ki Jaya! Nitai Gaura Premanande! Hari Haribol!
Find them here: http://goo.gl/jpM37s

Bhajahari das adhikary: This Saturday it was a real pleasure to be joined by Krpamoya prabhu and Guru Carana Padma devi dasi. Two of Srila PrabhupadaÓs long serving disciples here in the London yatra.