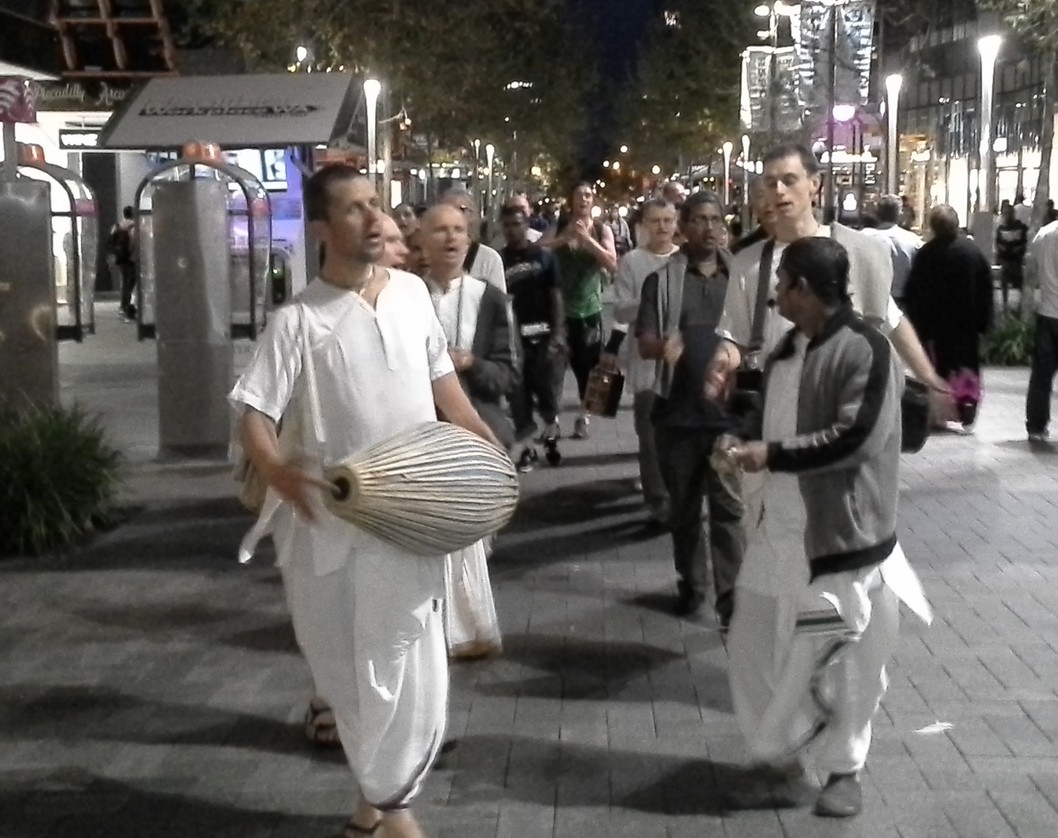 This year the World Holy Name Week 2015 coincided with the 50th anniversary of His Divine Grace Srila Prabhupada’s arrival in the United States. To give this year’s celebration a higher dimension, the ISKCON Perth congregation laid more emphasis on the chanting of the Holy Name by targeting one Harinama Sankirtana everyday during the span of the event.

The Harinama Party made a kick-start of the event on Friday 25th September with a Maha Harinama in the City. Prior to the event, the Holy Name week spirit was imbibed upon the congregation members via motivation and inspiration to partake in the blissful chanting of the Maha-Mantra for the pleasure of Their Lordships Sri Sri Gaura Nita. This ensued with other Harinama Sankirtanas in the City itself on the following Saturday and during most of the rest of the week.
In addition to the street chanting around the city malls, two sitting Harinama Sankirtanas were also programmed. The first one was organised in Esplanade Park in Fremantle on Monday 28th. Being on a public holiday (Queen’s Birthday), this did attract quite a few participants and usually during the week-end and on public holidays, Fremantle does get quite busy as from early morning. Many were the onlookers who were captivated by the rhythmic tunes of the Maha-Mantra whether be those who came for a stroll with the family or a jog or still to walk their dog in the park.
The second sitting Harinama Sankirtana was held in Hyde Park in the City under Srila Prabhupada’s Tree on Sunday 4th October. That was on the last day of the event – the 50th anniversary date when His Divine Grace set foot in the United States. To go back in time, the said tree was planted by dedicated followers of Srila Prabhupada in honour of His usual morning walks while He was in Perth. With quite a few participants turning up, a wonderful Kirtana was entertained to commemorate that glorious day. There were instances where kids accompanied by their parents stopped and made little dance moves in synchronisation with the melody of the Kirtan. A father with two little daughters was quite curious at what was going on and after enquiring later came back to join in; they even stayed for prasadam which they relished.

2. Seminar on the Holy Name

Saturday 26th September, was the appearance day of Srila Bhaktivinoda Thakura. In order to pay honour to the pioneer of the Hare Krishna Movement and after the Harinama Sankirtana in the City during the day, a seminar was organised at the Temple later in the afternoon. The theme was twofold – the glories of the Holy Name and the importance of chanting the Maha-Mantra. A quite convenient way to celebrate the fourth day of the WHNW 2015 which was on Sunday 27th – the disappearance day of Srila Haridas Thakura, was to hold a 6 Hour Kirtan at the Temple. Sri Caitanya Mahaprabhu Himself declared Srila Haridas Thakura as the Namacaharya or the person who most exemplifies how to best chant the Holy Names of Krishna.
Programmed between 1pm and 7pm, the 6 hour Kirtana aimed at producing a flow of limitless nectar of the Holy Names of the Lord. The participants were the Temple Kirtana Specialists and the Bhakti Vriksha groups of the Perth congregation as well as the Sunday School kids.
The 6 hour Kirtana reached its pinnacle with a resounding Gaura Arati to glorify Their Lordships Sri Sri Nitai Sacinandana.

4.1 Lecture on the Chanting of the Holy Name

The lecture was mainly based on evidences from the Vedic scriptures on the chanting of the Holy Name. This was then complemented by the playing of an audio track of the beautiful song “Yadi Prabhupad na hoito” composed by HH Jayapataka Swami – a perfect way to give it a thought … hadn’t His Divine Grace been to the West.

The video clip “Acharya” – a preview of the film by HG Yadubara das was projected on screen mainly to revive our feeling of indebtedness to Srila Prabhupada and also to reveal such an exalted personality to those in the audience who did not happen to know Him.

4.3 Kirtana by the Sunday School Kids

No special programme can be complete without the participation of the Sunday School Kids. They very nicely sung the Bengali poem “Markine Bhagavat-dharma” composed by Srila Prabhupada on board the Jaladuta at the Commonwealth Pier, Boston.

The constant struggle between the mind and self is a daily struggle for each and every one. The drama depicted how to resolve this conflicting situation by the chanting of the Holy Name.

We would like to express our gratitude to both Sita Ram Lakshmana Prabhu and Yadu Srestha Prabhu, co-Presidents of ISKCON Perth, for their constant support in organising the World Holy Name Week 2015. We would also like to show our appreciation to all the devotees of the Perth congregation who participated in the celebration and contributed their help either directly or indirectly.