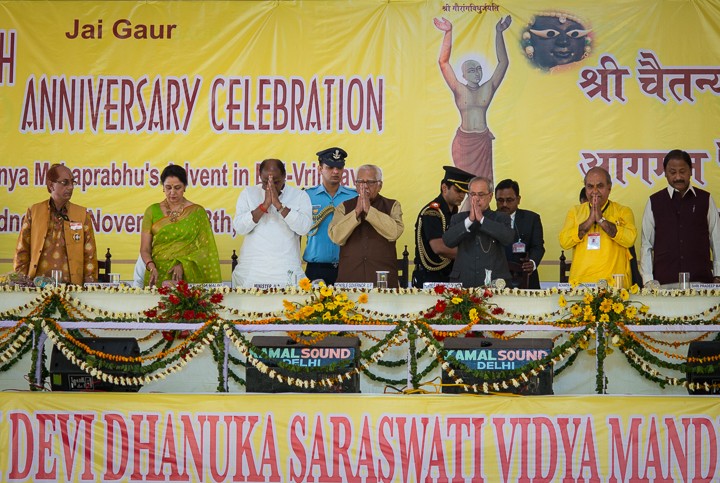 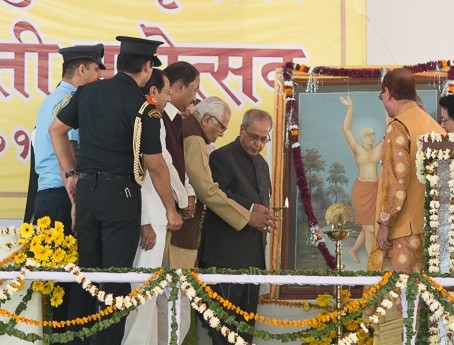 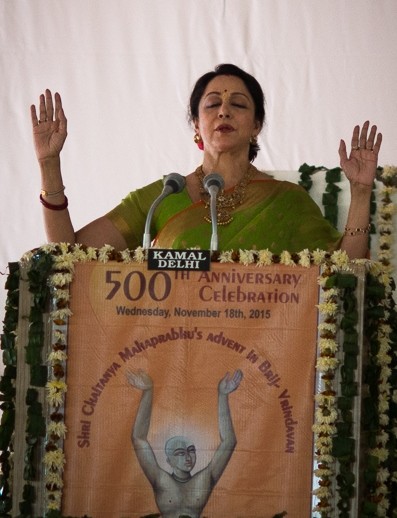 Vrindavan (Uttar Pradesh), Nov. 18 (ANI): President Pranab Mukherjee, who attended the celebrations of the 500th year of Shri Chaitanya Mahaprabhu’s advent in Vrindavan today, said that the great saint was one of the greatest exponents of the Bhakti movement.

Speaking on the occasion, the President said Shri Chaitanya Mahaprabhu preached love, equality, humanity and harmony. He urged the people to adopt this message of the great saint and recharge the society.

President Mukherjee said Chaitanya Mahaprabhu was one of the greatest saints of the Bhakti movement.

“He was responsible for the popularity of Vaishnavism in Bengal through his Kirtans, which were unparalleled in lyricism and beauty. Shri Chaitanya Mahaprabhu preached and spread loving devotional service and congregational chanting through personal demonstration. He propagated the cult of devotion by personally practicing it,” he said.

The President said living with diversity and finding unity in diversity has been practised in India over centuries.

“Many people wonder how it is possible for India to accommodate so much diversity within one system of administration, one Constitution and one legal jurisprudence,” he said.

The President said the answer lies in our civilisational values.

“India’s unity has been possible because of our cultural and civilisational values. We have inherited these over centuries and have nurtured it. It is now a part of our life,” he added.

——-
Hema Malini, the local MP, was the most unabashedly devotional in her remarks. She began with “Radhe Radhe!” She also started her talk with a verse from Chaitanya Chandramrita. She was the only speaker other than the hosts to recite a Sanskrit verse:

I offer my obeisances unto Sri Chaitanya Chandra, whose body is the embodiment of an ecstatic pastime, whose beauty is divinely beautiful, a picture of golden light, and who is the giver of the highest taste of supreme love of God. (Caitanya-candramrtam)

Hema remarked that Chaitanya Mahaprabhu’s visit had set into motion the growth and development of Vrindavan-Mathura and that she was committed to the advance of the people of the district, especially in preserving and spreading the cultural contributions of the region. She also remarked that she has a special feeling for Radha Raman since Gopal Bhatta heralded from Srirangam, where she herself was born.