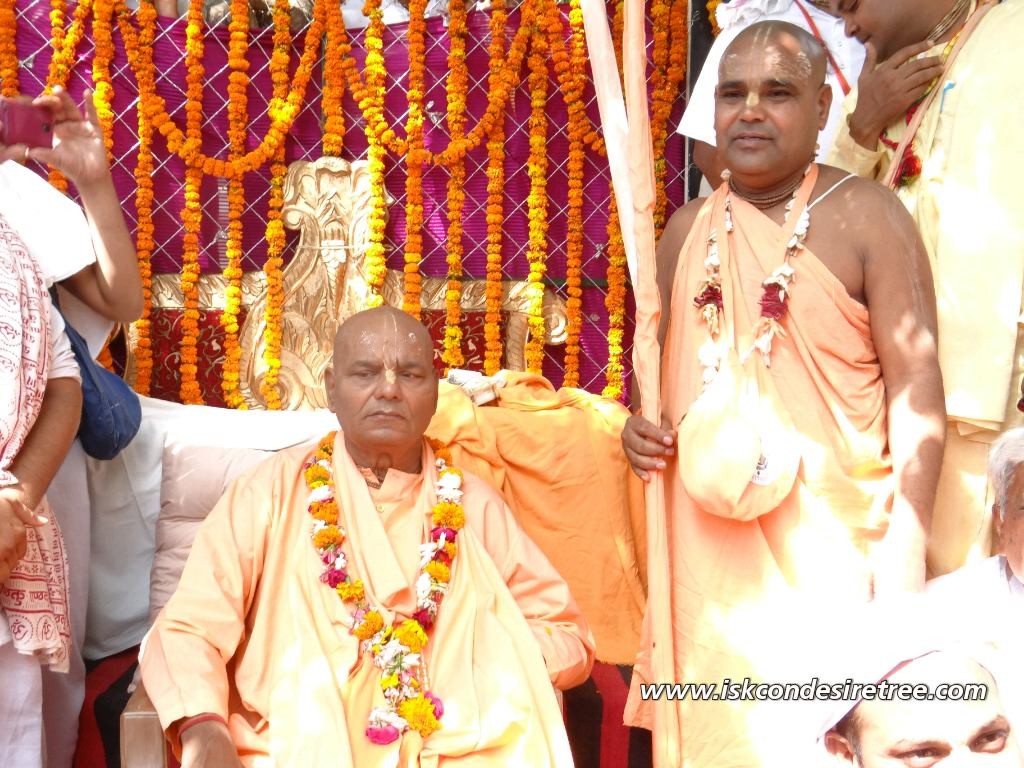 Alas, we have lost the association of yet another great Vaishnava saint in the form of H.H. Gaura Krishna Goswami. Actually, I did not know him well, but because Vaishnava dealings are all on the absolute plane, therefore I know him through hearing his glories from other devotees. It is well known that he was an amazing pandit and wonderful public speaker exclusively on the subject of Hari katha. Although we cannot say he was necessarily a paramahamsa, there is no doubt that he must be counted in his manifest preaching activities as a pure devotee.

There are many kinds of pure devotees, beginning with those who strictly follow acharya but may be madhyam adhikary (mid level), up to those who are paramahamsa, maha bhagavata (self realized in pure devotion), uttama adhikary (highly elevated), and, of course, nitya siddha (eternally liberated, who descend from the spiritual world). In any case, Maharaj must be considered a pure devotee who walked this planet to spread the mercy of Srila Prabhupad and Sri Chaitanya Mahaprabhu.

There are some devotees who ask that we pray for him. This conception is defective. Why? Because he was beyond that level. When he departed this mortal world, he certainly went straight into nitya lila (eternal pastimes) with Sri Sri Radha and Krishna and (according to the authority of Sri Brahma Samhita) simultaneously into nitya lila with the Pancha Tattva and all the eternal associates of Sri Chaitanya Mahaprabhu and Sri Nityananda prabhu. This is the actual potential for the residents of Vraj, who are the most powerful of yogis and can have more than one spiritual body simultaneously.

Was there any time lag when he left this world? Did he “hang around” in some undefined place in space before being transferred to the spiritual world? Certainly not! We see from the Bhagavatam and Krishna Book descriptions of great souls who instantly attain their spiritual body, being transferred to the eternal kingdom of God without any time lag whatsoever. Generally, when a devotee leaves their body who has been following acharya but has some remaining material desires unfulfilled, they are transferred to Gokula, that realm where Krishna’s manifest (prakat) lila is taking place right now in some other universe. There, their final purification takes place by direct association with the walking, talking, dancing, flute playing Krishna. The instant love becomes so strong that any remaining residual (dirt) left over from the material world is instantly burned off. Sometimes this is through intense vipralamba (the fire of separation) such as in the case of many of the gopis who had attained Gokula by their prior devotional service (sadhana siddha, perfection through regulated bhakti practice). This example may be found in the married gopis, who still had family dealings with husbands, babies, mothers-in-law, etc, yet were in love with Krishna, yearning to join the rasa dance on hearing the sound of Krishna’s flute. Some even left their bodies in separation, then being transformed into nitya lila in Vraj of Goloka Vrindavan, Krishna lotus flower abode.

In any case, whether Maharaj went to Gokula or direct to Goloka Vrindavan is academic. Both places are on the absolute plane of pure loving service to Krishna, and both are “back to Home, back to Godhead”. Because of his purity, however, it is quite possible that Maharaj was instantly transferred directly to Goloka. Where, then, is the scope for praying for his deliverance? It is almost insulting for such a great soul. Rather, we should pry to him for our deliverance, since either way he is now an eternal associate of Krishna in a spiritual body! Blink a few times and many of us, those who don’t get de-railed to the heavenly planets to enjoy pious life and sense enjoyment, or are forced to return in another material body do to unfulfilled material desires and re-generated karma, will be again in his association in the spiritual world, regardless of his swarup (spiritual body). May we rejoice in his entrance into Krishna’s nitya lila, even though we lost his association.

“Swamiji” is coming back!

After the Disappearance of Sri Guru

1 Comment to “ A Tribute To HH Gaura Krishna Goswami”