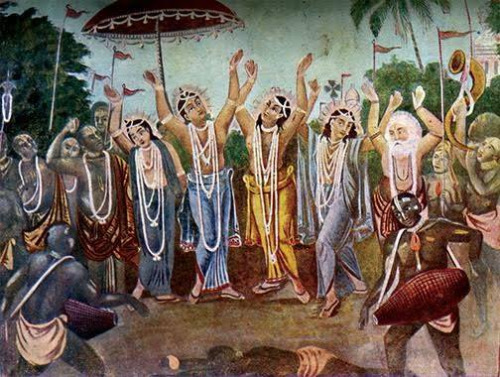 KK Bindu # 364, A first-time translation of a rare song, “The Real Meaning of Sevaka”, and more … The latest issue of Sri Krishna-kathamrita Bindu e-magazine was just released. This issue includes: * THE GOPIS’ LUST FOR KRISHNA – Reflections from His Divine Grace A.C. Bhaktivedanta Swami Prabhupada. * FIRM FAITH IN GURU – Instructions from from His Divine Grace Bhaktisiddhanta Saraswati Thakur Prabhupada: “A sincere disciple has the same devotion for his gurudeva that he has for the Supreme Lord. And he worships and serves him the same way. Those who do not serve their gurudeva this way fall from their position as a disciple.” * THE BRANCH AND THE MOON – An insightful analogy explained by Sri Srimad Gour Govinda Swami Maharaja, * THE REAL MEANING OF SEVAKA – A first time translation done for this issue OF Bindu from a little known book called “Manah Siksa”, by the poet Premananda Das.
It can be downloaded here: https://archive.org/details/bindu364

“Change Inside to Change Outside” (5 min video)If…