How the Bhaktivedanta Manor in the UK was found and… 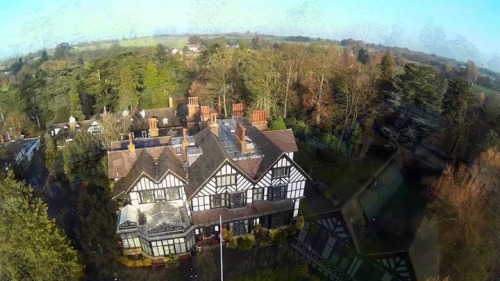 How the Bhaktivedanta Manor in the UK was found and bought.
Dhananjaya: By the end of 1972 nothing had happened. Prabhupada wrote to me, "Better to take the upper hand and begin very energetically attempting to get some place. Expending energy for Krishna, that is appreciated and not the actual result of our energy. But if there is lack of energy being devoted for some purpose, then everything will be delayed and possibly stopped. Better to seize the iron while the fire is hot, that my guru maharaj used to tell me." Prabhupada presumed that the iron was getting a little cold. Then in January of 1973, in a freezing cold, miserable British winter, we got information about a property called Piggot’s Manor in Letchmore Heath, 17 miles from central London. This was the one and only time I didn’t go as a devotee, with a shaved head, dhoti, tilak and kurta, but went disguised with trousers, coat and hat. The previous property George and I had looked at was an amazing health spa outside of the city of Oxford with an indoor heated swimming pool, a beautiful conservatory, saunas and mud baths and more than a hundred acres of land. The asking price was 330,000 pounds. After George saw that property he said, "This is a bit rich for you people, isn’t it? You’re supposed to be renunciants. Even I would have a hard time remaining Krishna conscious in this environment." Then we got the details on the Manor, which was being sold for 220,000 pounds—110,000 pounds cheaper than the previous property. This time George didn’t come but I phoned him from a pay phone in what is now the Manor temple room, and I described the details and the price. He said, "It’s a lot cheaper than the previous property. What do you think?" I said, "I think it’s a fabulous place." He said, "All right, I trust your judgement. I can’t come to see it because we’re having some meetings in Los Angeles with Allen Klein, our financial advisor, about selling the Apple Company." George gave me the names and phone numbers of legal people who could do the paper work to buy the property, and said, "Phone them up, tell them that you want to secure this property, and when the transaction is complete, I’ll come and see it." The paperwork took about six months. George had set up a foundation called the Material World Charitable Foundation. He said, "The profits from the Living In the Material World LP album will go towards paying for that property, but it’ll go through my foundation." And that’s what happened—the Material World Charitable Foundation paid for the property, and the agreement was that we would pay 10 pounds a year rent, which is called a peppercorn rent. It’s the absolute minimum that you can pay for a costly property. We acquired the Manor from a Scottish lady, Mrs. Ruffles, who was from Aberdeen, a city in northern Scotland. The story is that the Scots are quite mean, but even in Scotland, people from Aberdeen are called Aberdonians, and are considered extremely mean. Before we moved into the property, Mrs. Ruffles removed every single doorknob from every single door. She removed a pair of brass lion’s head doorknockers from the front doors to the house. She removed all the pelmets and siphoned off all the diesel fuel (for the central heating) from the tanks. Mrs. Ruffles took away all the coal for the fireplaces. When Prabhupada went on an inspection, there were a couple of doors we couldn’t open because there were no doorknobs or door handles or any way to open the doors, so we had to show him those rooms later on. When we showed him his quarters upstairs, with its huge living room, a huge old-fashioned bathroom and a comfortable bedroom, he was happy. He said, "Yes, this is a nice facility for the spiritual master." All this time the Deities that had been sent from India were in our temple sewing room. Generally when there’s a new temple project, first we get the land and house and then the Deities come. But in this situation, the Deities came one year before we acquired Bhaktivedanta Manor. When Prabhupada came in the summer of 1973, he asked me, "Where are the Deities that came to England in 1972?" I said, "They’re stored in Bury Place." Prabhupada said, "We will install those Deities in this property." And that’s what happened. On Janmastami Day of 1973, Srila Prabhupada installed the Deities and he named Them Sri Sri Radha-Gokulananda. He had intended to call the community New Gokula, and the bliss of Gokula is Radha-Gokulananda. One of the first things George did when he returned from Los Angeles was visit the Manor. We took him on a tour of all the rooms because by that time we’d gotten door handles and doorknobs and we showed him the gardens and the lake and all the other places. George was curious about everything. He liked the Manor and thought it was a good value for the money. Then Shyamasundar brought George to the temple room and said, "Wouldn’t some crystal chandeliers look great here?" George said, "Yeah, that would be really nice," and George bought a pair of beautiful chandeliers for 3,000 pounds—after he had just bought the Manor for us.