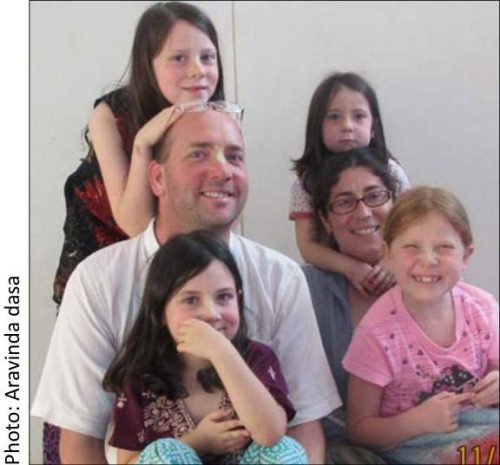 New Govardhana Sunday School (Australia). Kisori devi dasi Recently I interviewed Indranila devi dasi about the Sunday School she runs at New Govardhana.
Kisori (K): What’s your inspiration for running the Sunday School?
Indranila (IN): I thought the children were a bit unsupervised and not positively engaged on Sundays. I also feel very inspired by Aruddha devi dasi’s book, which advises how to teach our children Krishna consciousness.
K: Please explain how it all works.
IN: We have three different age groups – under four years old; four to six year olds; and six to 10 year olds. The first two groups run for an hour each, while under four year olds have activities that include kirtana, Krishna conscious nursery rhymes, cognitive development such as matching, sorting, numeracy and literacy with Krishna conscious props, stories, drawing, playdough and coloring-in. The four to six year olds have kirtana, story time with questions, role play pastimes and craft to enhance the learning and comprehension. Finally, the six to 10 year olds learn songs, and read then discuss for 90 minutes. The teacher plays ‘devil’s advocate’ during these discussions. After that there is either games or craft to further solidify understanding in a practical way. K: What is attendance like?
IN: Attendance ranges from eight to 15 children. I ask for $1 fee per child per session to cover costs.
K: What is the feedback that you have received so far?
IN: Parents appreciate the Sunday School, but are often too busy or exhausted to bring children every Sunday.
K: What have you got planned for the future?
IN: The general plan is to inspire children to participate with the Vaisnava community and feel connected. The core focus is to plant the bhakti seed and help them flourish by giving quality guidance and education so we can have children who are strong and confident in themselves as devotees and compassionate enough to want to share Krishna consciousness with the rest of the world. I would appreciate more parents coming forward to help. Then we could include programs for older children and teenagers.