Srila Prabhupada: “Whatever you have on your plate when you start, you have to finish that prasadam!” 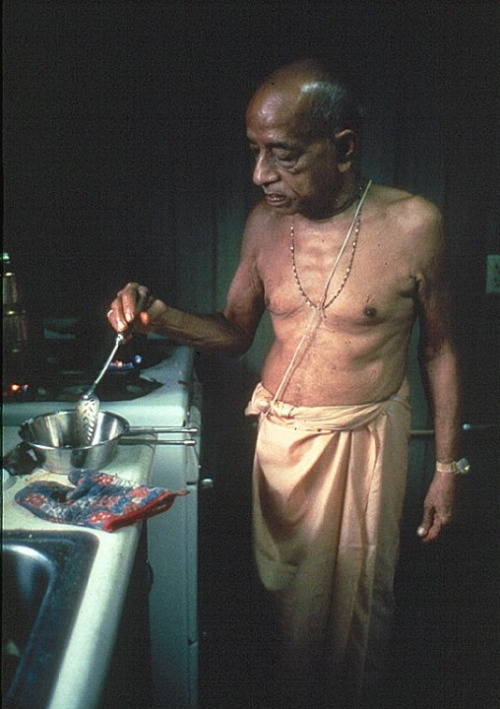 Srila Prabhupada: “Whatever you have on your plate when you start, you have to finish that prasadam.”
Daivishakti: In 1974, maybe in August, after Janmastami, Prabhupada was again recovering from his sickness. And we used to cook for Prabhupada, and then after cooking for Prabhupada we would make something for his servants and secretaries to eat.
There were three of them that we were cooking for at that time. I think it was Brahmananda Swami, Bhagavan, Srutakirti and maybe a few others. So we would bring that prasadam for them around to the front, and then a servant would come and drop off their plates and we’d have to wash them all out here in the garden because there was no water in the house then.
We’d have to draw all the water from the front well. So I was still cleaning the kitchen up and the plates of the servants had been left outside of the kitchen. The devotees hadn’t finished their prasadam that day, so there were some remnants on their plates.
Prabhupada came into the kitchen to go to his bathroom and he saw these plates, and he called me and he said, “What is this?” And I saw the plates. Normally I would have taken them and washed them right away.
I said, “Oh, that’s a mistake, Prabhupada, I was supposed to clean them.” And he looked quite displeased. So immediately Prabhupada walked through his house to the front room where his secretaries lived, and seeing that Prabhupada was displeased I picked up the plates and came the back way to show Brahmananda what Prabhupada had seen and how he wasn’t happy about it.
So simultaneously Prabhupada came from one door and I came from another door with the plates in my hands, and Prabhupada called me in and had me show them the plates with the prasadam on it.
And he explained to them that no matter who you are, no matter whether you’re GBC or anyone, once you touch the plate, whatever is on that plate you have to finish it because it’s prasadam. You shouldn’t leave any prasadam on the plate.
So Brahmananda jokingly said, “But Prabhupada, I had burped. I thought that after you burped you couldn’t finish it.” Prabhupada then said,
“You can take off first. If they’ve given you too much, before you start, you take off and that doesn’t have to be completed. But whatever you have on your plate when you start, you have to finish that prasadam.”
So he was telling the topmost members of our society, the GBCs and personal secretaries, they had to finish their prasadam. Just like a father he was instructing them.

1 Comment to “ Srila Prabhupada: “Whatever you have on your plate when you start, you have to finish that prasadam!””