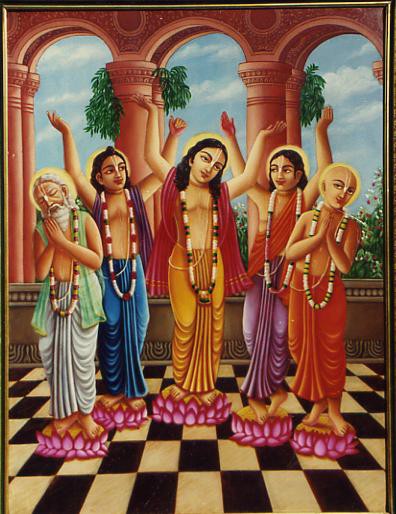 Saradiya: Swamiji? When we go to Krsnaloka to be with Krsna…

Prabhupada: Just see this girl, little girl, is aiming for going back to Krsnaloka. Just see.

Prabhupada: How you are feeling, Saradiya? Nice?

Prabhupada: You are going to Europe? No? You have got to attend your school? That’s nice.

Saradiya: Simply by Your Divine Grace, on Krsna’s appearance day in San Francisco my mother came to the temple and she wore a sari and a tilaka.

Prabhupada: Oh. (chuckles) You are converting your mother to this cult.

Yamuna: A very nice mother she has.

Prabhupada: Unless mother is good, how the children are good?

It was the summer of 1969. I was cleaning A.C. Bhaktivedanta Swami Srila Prabhupada’s apartment on 26 2nd Ave in New York City. His apartment was behind the Radha Krishna Temple, across the small courtyard, up the stairs, and on the second floor. His rooms were small, but functional.

The temple was a small storefront that the previous tenants had made into a gift store with the sign: “Matchless Gifts.” The sign certainly alluded to the real matchless gifts of Srila Prabhupada’s teachings generously given to all who entered the transformed storefront.

The previous summer, I had the good fortune to attend a few of Srila Prabhupada’s darshans (discussion/gatherings) in this apartment. He had asked the devotees if they were painting. This question was directed to his female disciples, since they comprised the small group of devotees who were creating paintings in preparation for illustrating books that were gradually getting published; as well as supplying transcendental art for the many temples sprouting around the globe.

That was in 1968. The next year, the devotees moved down the block to 61 2nd Avenue for a brief time before their relocation to the larger building in Brooklyn, on Henry Street.

As I cleaned Srila Prabhupada’s rooms, I noticed the clothesline in the kitchen was still there, but not much else, except my memories and the sense of his presence. Then, unexpectedly, I saw a small Indian print on the counter. Picking it up, I saw that it was Lord Caitanya, Lord Nityananda, Sri Advaita, Sri Gadadhara, and Srivasa, also known as the Pancha-Tattva. “Five Truths in One.”

I was charmed by the unique composition of the figures and surrounding architecture; as well as the delicate lines and bright colors; and most importantly, the devotional mood of the transcendental picture.

A few years later, I had the good fortune to reside at the Bhaktivedanta Manor in England, which had been donated by George Harrison. Srila Prabhupada lived at the Manor for most of that summer of 1973, as well as attended the successful Rathayatra in London.

While Srila Prabhupada was at the Manor, I worked on a large 4 by 5 foot oil painting of the Pancha-Tattva. Who would have ever guessed that the little print from the small storefront on 2nd Avenue would manifest as a large painting housed in the elegant Bhaktivedanta Manor in Great Britain, presented as a gift to His Divine Grace and his devotees.

Lord Jesus and the Vegetarian Diet