“One Soul at a Time” 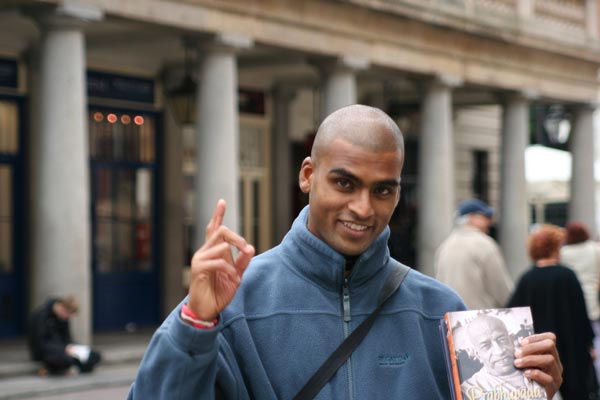 I wanted to offer a few words of encouragement to all the assembled devotees throughout the world who are today embarking on the first day of December and their annual efforts to increase Srila Prabhupada’s Book Distribution during the Christmas Marathon.

The following final statements of His Divine Grace found in his Perfection of Yoga, are most encouraging for anyone who is fortunate to hear and accept them.

“The yogi who is progressive is therefore on the true path to eternal good fortune. One who sticks to a particular point and does not make further progress is called by that particular name–karma-yogi, jnana-yogi, dhyana-yogi, raja-yogi, hatha-yogi, etc.–but if one is fortunate enough to come to the point of bhakti-yoga, Krsna consciousness, it is to be understood that he has surpassed all the other yoga systems.

Krsna consciousness is the last link in the yogic chain, the link that binds us to the Supreme Person, Lord Sri Krsna. Without this final link, the chain is practically useless. Those who are truly interested in the perfection of the yoga process should immediately take to Krsna consciousness by chanting Hare Krsna, understanding Bhagavad-gita, and rendering service to Krsna through this society for Krsna consciousness and thereby surpass all other systems and attain the ultimate goal of all yoga– love of Krsna. (POY)

Samkirtan – book distribution and Hari Nama – is where the “rubber meets the road” so to speak in our collective efforts to share what we have all been given by His Divine Grace Srila Prabhupada. That is where our philosophy ceases to be mere “doctrine” and becomes realized action. His Divine Grace Srila Prabhupada considered each and every single soul on the planet as being “absolutely” significant as a direct result of his knowing our “eternal” connection to the Lord Himself.

He took the task of transforming our unfortunate condition to one of absolute good fortune – serious in the extreme. He did this – one soul at a time! Each of us – was individuallly made eternally fortunate by Srila Prabhupada. There is a wonderful parable that I have always loved that illustrates this tenacious willingness on Srila Prabhupada’s part to make this Krsna Consciousness available to as many as he possibly could. I share it with you all to illustrate this only.

One morning long ago… there was an old man walking near the shore of the vast ocean. He was hobbled and crooked and even his breathing was labored. He looked up and noted that there were thousands of starfish – large and small – stranded by the outgoing tide, too far from the roiling waves to save themselves and facing suffocation and intense heat from the sun’s rays as it rose in the sky. He began to bend slowly and one by one – pick a starfish and walk to the shore where he would then hurl the starfish back to the safety of the cool waves. A young boy of 10 spied the old-timer and studied his actions for some time. In due course he approached the old man who was so absorbed in the task at hand – he failed to register the presence of the boy.

“Hey Mister. What are you doing?” the boy queried.

The old man noted the look of incredulity upon the boy’s face and said “What does it look like I am doing? I am returning these starfish back to the sea a’fore they all die here on the shore”!

The boy looked ahead on the beach and as far as he could see – there were stranded starfish.

“Hmppf!” puffed the lad. “Old man…I don’t want to discourage you, but did you happen to see just how many of these critters there are out here?”

“What’s yer point young fella”? the old timer said as he paused to look the lad up and down.

“Well… do you really think all this is gonna make a difference?’

The old man – paused…looked at the boy with a twinkle in his eye and slowly bent over with a groan and again picked up a big starfish. He paused…then slowly walked to the shore and hurled the starfish out to sea as far as he could.
He walked back to where the boy was standing..still staring in disbelief at the efforts of the old man.

“Well” the old man said, smiling wryly …”I made a difference for THAT ONE didn’t I”!

The boy smiled…nodded his head in agreement – then bent over and joined the old man in his efforts!!

Srila Prabhupada has arranged for all the “stranded starfish” of this God-Forsaken material world – to be given the golden opportunity of Krsna Consciousness within the misson of Lord Chaitanya Mahaprabhu.

He showed the example and set about saving us all – individually – one at a time. Each of us has our own beautiful recollection as to how we found the shelter of Lord Krsna, Srila Prabhupada and his devotees. This remains fully available to any sincere soul. There are thousands experiencing this all over the world – daily. Anyone can participate. Anyone can – like that young lad who took to helping the old man rescue as many starfish as possible – roll up his or her sleeves and just dive into the task “full bore” and help Srila Prabhupada in his efforts to make a difference in the lives of as many as possible! Can’t you practically see His Divine Grace, with a twinkle in his beautiful gaze, chuckling with delight, as his books pass from our humble hands to the hands of the suffering souls who are gasping in the suffocation of ignorance and fear in this world!!

And for those who are unable for whatever reason to participate directly in the Marathon – my sincere suggestion is; kindly go to your nearest local Temple President and ask him how you COULD assist him with the marathon there in your local region. Remember – you too can help “make a difference” – for at least one soul this marathon. Let nothing in your mind or from another prevent you from making that difference – for at least that one soul. Offer your time, your money or your assistance – to the men and women who are going out each day this month. Trust me – YOU WILL MAKE A DIFFERENCE – even if but for one soul only. And remember – once upon a time – in the not too distant past – that one soul – WAS YOU!

Dome Story
The Expansion of Christ Consciousness - Parallels with ISKCON

All the Book Distributors Will Go Back to Godhead