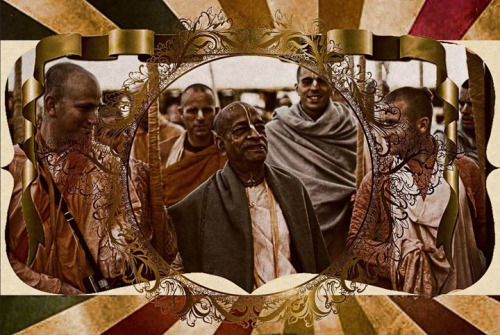 January 15. ISKCON 50 – S.Prabhupada Daily Meditations.
Satsvarupa dasa Goswami: Please forgive me for not speaking more directly of Prabhupada. This is all I have. It may be like reading a menu rather than giving you the feast. However, I am trying, and only by this way can I get closer. When I walk and talk with Srila Prabhupada, I feel that I am with him. It is real, this presence. It is not tangible in the sense that you can touch it or say, “There, I just saw a vision of Prabhupada. He was standing in the forest wearing a saffron coat.” Or, “I suddenly heard his voice saying, ‘Go on, you are doing very nicely.‘” Or, “He just said, ‘You rascal!” Or, “I suddenly smelled the aroma of his body—sandalwood, mustard oil and roses.” Or, “I suddenly felt something within myself and tears flowed and I cried out, ‘Prabhupada!'” I am not deriding such intense encounters, but I am saying the subtle, intangible presence is also worthwhile. When I come back from a walk I do not ask, “Was Prabhupada here? Did I meet him?” I am sure I did. We can talk to him. “Prabhupada, do you hear those birds? I do not know their names, but it is so nice to hear the birds sing in the morning. It is so nice to be in the country where practically the only sounds are those of nature. I know, Prabhupada, that you deplore the industry in the city, although we should be there for preaching. Prabhupada, is it like this in Vrndavana?”
To read the entire article click here: http://www.dandavats.com/?p=20490&page=4