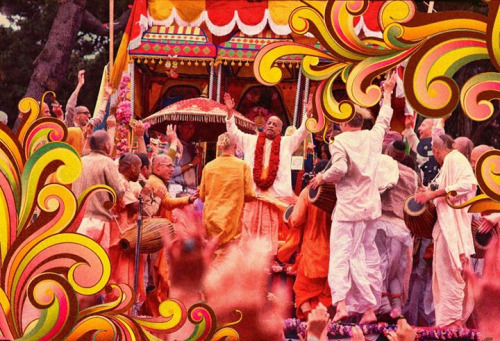 January 16. ISKCON 50 – S.Prabhupada Daily Meditations.
Satsvarupa dasa Goswami: Immortal Prabhupada! We should not think that we are better than Prabhupada because he has passed on and we are still living in this “wonderful” world. It is not that Prabhupada is now among the unfortunate dead and we are living. The whole basis of connection with Prabhupada is that we are all eternal. Socrates said that the soul is immortal, and he chided his disciples for thinking otherwise about him. If we want to be with Prabhupada, we must have faith that he is not dead. He is eternal. He is preaching somewhere, and we will also always be preaching somewhere. Otherwise, what is the meaning of being his follower? Prabhupada has gone ahead of us, and we are following. In the old days, people would go ahead of their families and leave Europe for America. Their families would join them later after everything had been prepared. So Srila Prabhupada has gone ahead, leaving us memories and solid teachings for our lives. If we cannot complete our progress in one lifetime, we will continue in the next. Wherever we go, we want to make further progress with Srila Prabhupada.
To read the entire article click here: http://www.dandavats.com/?p=20490&page=4