Yagnas and Pujari feast at the Mayapur academy today. (Album… 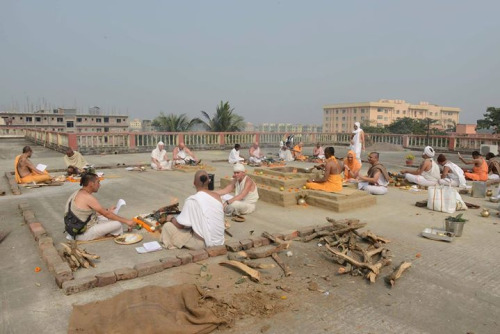 Yagnas and Pujari feast at the Mayapur academy today. (Album with photos)
Srila Prabhupada: According to shastra anyone who wears tilaka, and kanti over and above the Vaisnava dress or Vaisnava sannyasi must be accepted especially while chanting Hare Krishna mantra with bead bags. When Jagannatha has expanded His jurisdiction over the whole world why the so-called servants of Jagannatha should not allow them to see the Lord of the Universe? Letter to Shyamasundar, April 8, 1974.
Find them here: https://goo.gl/FNIOl1