Travel Adventures of a Krishna Monk: Travel Journal from North Florida and Atlanta 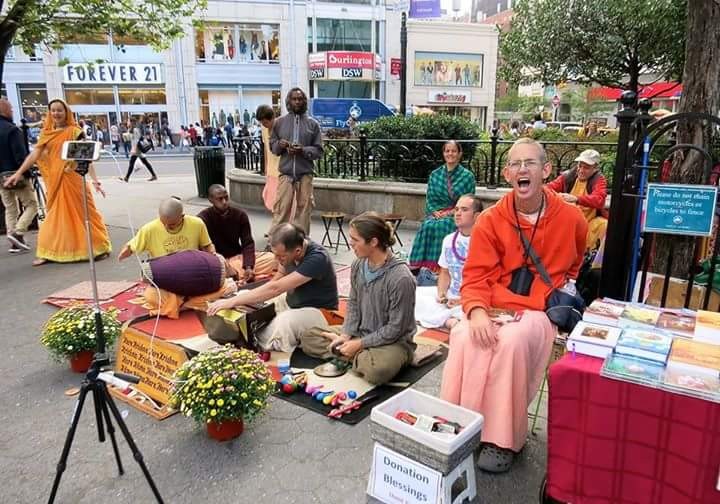 Diary of a Traveling Sadhaka, Vol. 11, No. 23
By Krishna-kripa das
(December 2015, part one)
North Florida and Atlanta
(Sent from Orlando, Florida, on January 16, 2015)
Where I Went and What I Did
For the first half of December I was based at our Krishna House in Gainesville, where I sang with their chanting party for 2½ hours each weekday while the devotees served about a thousand plates of Krishna food to the students, faculty, staff, and visitors at the University of Florida. The end of the first week we attended three outreach events where we shared the chanting of Hare Krishna with many people: the Jacksonville Art Walk, the Tallahassee First Friday, and the St. Augustine Christmas parade. At the Art Walk devotees also distributed many books. The second week I chanted at the Gainesville Farmers Market with just one other devotee. At Krishna House we had an end of the semester party with appreciations of the devotees and some humorous entertainment, and I share some of the parts most striking to me. I was part of our kirtana team at inspiring deity welcoming ceremony in Tallahassee that brought a lot of people together chanting Hare Krishna. 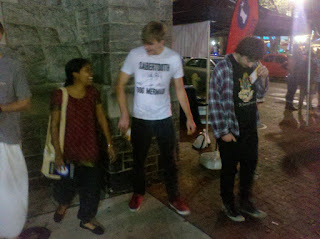 The Jacksonville Art Walk started slowly with Gauranga Prasad Prabhu singing a mellow tune and Alex teaching a couple guys the mantra and a simple dance, but as the devotees become more fired-up and the streets filled with people, many delighted in chanting and dancing with the Krishna House devotees, who also distributed books, cookies, and incense in addition to the holy name. 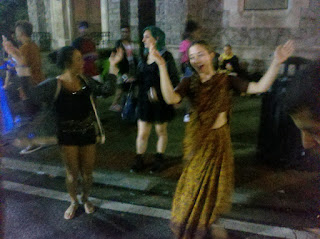 The very enthusiastic chanters, musicians, and dancers in our party inspired people to take part. I encountered many students from the local community college, but very few from University of North Florida, where we have programs. People took pictures of the devotees chanting and themselves and their friends with the devotees.

You can see how passersby were attracted by our chanting in this video (https://youtu.be/cu6qF5cO-HA):
First Friday in Tallahassee
Remembering previous good experiences chanting at First Friday, I encouraged my friends from Krishna House to go, and six of them did. Nama Kirtan Prabhu had not served prasadam at First Friday for a few months, but he decided to do so at the First Friday in December. We chanted near the prasadam serve out until there was a slow period, when I suggested we do a walking hariama around the circular Railroad Square. Christiana, who led the singing, offered shakers to people who were attracted, gave them mantra cards, and encouraged them to dance. Audrey and others assisted. It was incredible to see the openness of the people to take part and their joy in doing so. Audrey said it was the best harinama she ever went on, and she was so glad she came. Special thanks to Carlos for playing the harmonium, Bali and Vaishnava for playing the drum, and Ricardo for playing the karatalas.
In this series of video clips, you can get a taste for what it was like (https://youtu.be/mda6aQ84dLs):
St. Augustine Christmas Parade
I remembered the rain, the speed of the procession and the good reception by the public from previous years at the St. Augustine Christmas Parade, but this year the rain and the speed surpassed my memories. I was happy that twelve of us came in the Krishna House van to join with the Alachua devotees, who arranged for our participation in the event. Christiana did such a good job dancing enthusiastically in the front of the procession that Mother Mukhya, Alachua temple president, mentioned her in the Sunday feast program announcements the next day. Audrey also did a good job dancing. I let the two young ladies go in front until I was disturbed by the great gap between our party and the float ahead of us, and then I went to the front of our party, hoping to inspire the devotees to reduce the gap. Although I moved as fast as I could, dancing and proceeding forward at the same time, it was very difficult to bridge the gap. I was amazed that the other devotees did not make much endeavor to reduce the gap very much, even the ladies half my age, for whom walking quickly was not difficult. When we got to the center of town, fortunately for us, the procession slowed down, and everyone was able to catch up. Mother Akuti got some of the onlookers who seemed a little favorable to play the tambourine, and Christiana got a few people to dance. We were definitely the most lively and interactive group in the parade. Our float was a Ratha-yatra cart, but it was pulled by a vehicle instead of by the devotees, which lost some of the charm of the experience. Also the vehicle blocked our vision of the deities, a frustration. Apparently the city officials prefer we use a cart pulled by a vehicle rather than people so as it keep the parade moving at a brisk pace. Ironically, even with the vehicle pulling the cart, we could not keep up. Still it was a great event with many devotees participating, and lots of people were happy to see the devotees in the parade.
Mostly I was dancing, but I took a little video of our participation in the parade (https://youtu.be/39JH6BkBlfM):
Chanting Hare Krishna at Krishna Lunch 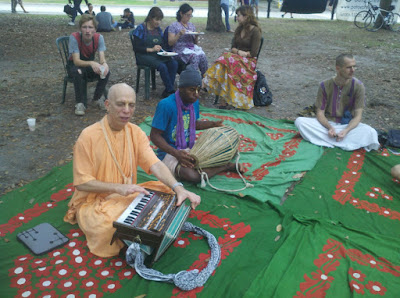 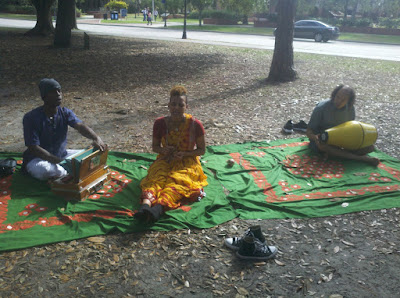 I encouraged the devotees to go out and sing on the campus and remind passersby that we would still serving Krishna Lunch at our place, and some of us did. 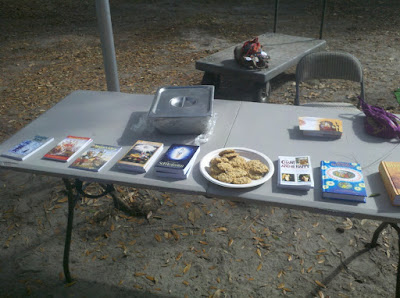 We had a book table with free cookies along with the chanting party.