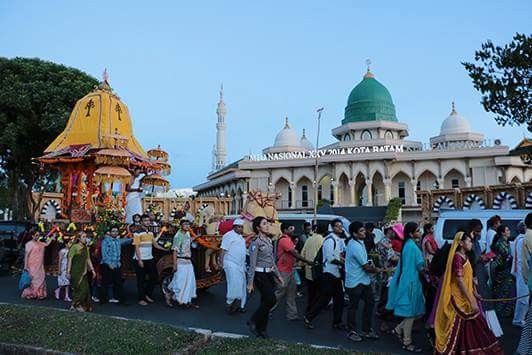 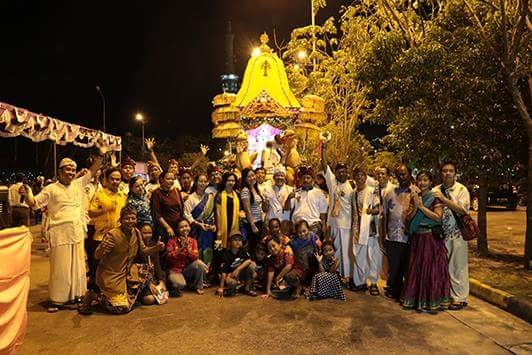 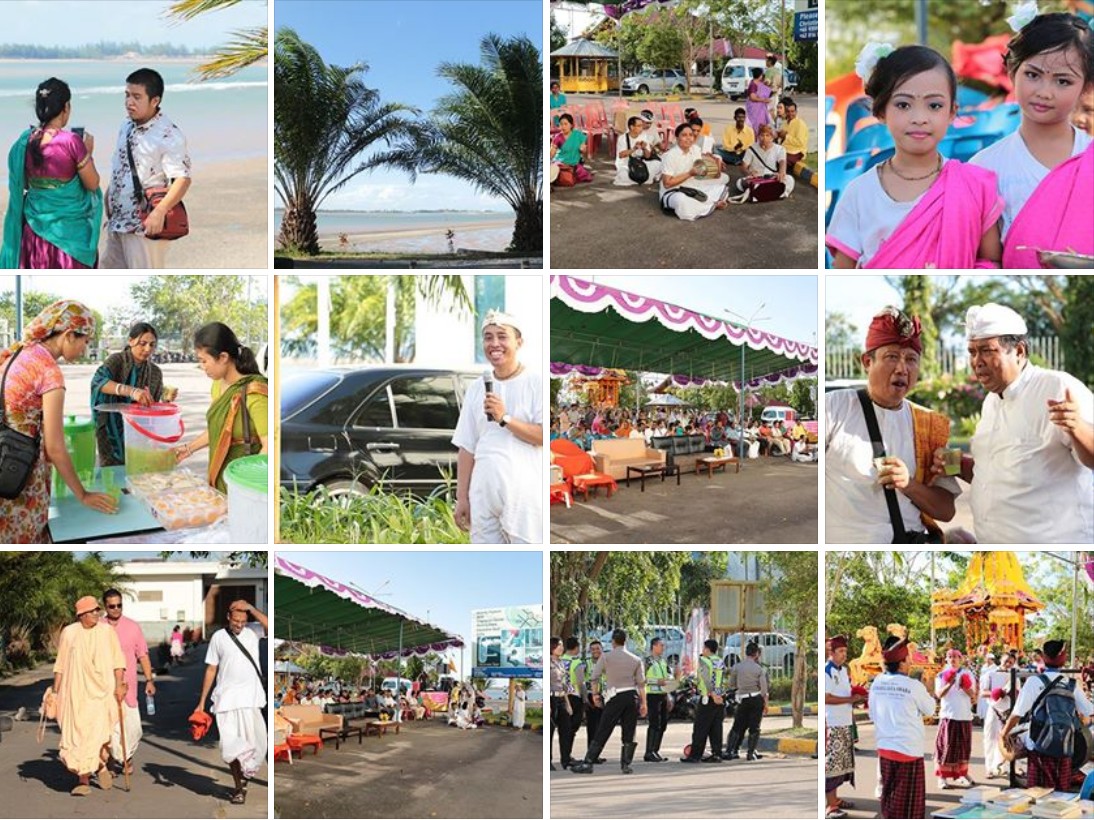 Batam is the largest city in the Riau Islands Province of Indonesia, across the Strait of Singapore, the third-largest city in Sumatra region and the eighth largest city in Indonesia. Located 20 km off Singapore‘s south coast, it is an industrial boomtown, an emerging transport hub and part of a free trade zone the Indonesia–Malaysia–Singapore Growth Triangle.

His Grace Samudrasena das (leader of ISKCON Batam) under the guidance of His Holiness Subhag Swami Maharaj organized the third Ratha Yatra festival with the help of devotees from different parts of Indonesia on 26th December 2015.

“Make the Ratha-yatra festival very great success. This will be a great introduction in your city and people will appreciate it.”– SPL to Shyamasundara, 4th May, 1967

The usual system in Indonesia is that the devotees join a local parade or cultural event with the permission of the Government and simultaneously hold the Ratha Yatra festival as one of the ‘acts’. The Ratha Yatra committee was considering joining the annual ‘Batam Anniversary Festival’ but the Lord had other plans. He wanted to have a festival of His own!

Invitations were sent out and preparations were underway. There are only five families practicing Krishna Consciousness in Batam presently but their spirit is large and that reflects in the way they serve together to please Srila Prabhupada. Many devotees from across Indonesia arrived the day before the festival and helped in various services. The majority of devotees were awake till midnight decorating the Lord’s chariot with various flowers and lighting arrangements.

On the day of the festival devotees from Singapore and other parts of Indonesia arrived. Special guest Atmanivedana Swami Maharaj made a boat journey to attend the festival from Singapore. At 3pm all assembled in front of Their Lordships who were beautifully decorated with a variety of fragrant flowers and stunning ornaments. Bhoga was offered and followed by an arati ceremony. A welcoming dance was then performed by the children of the ‘Batam Gauranga Centre’ to get everyone in the mood of the festival. The leader of Batam’s Hindu Parisad gave an ecouraging speech appreciating the devotee’s efforts in organizing the Ratha Yatra festival. Atmanivedana Swami Maharaj then spoke on the significance of the Ratha Yatra festival. A recorded message by Subhag Swami Maharaj was played. He spoke on the life of Srila Prabhupada and how he introduced the ‘Lord of the Universe’ to the West. Maharaj mentioned that Jagannath went to the West to bless the residents of those countries who had never heard about Him. Now by His sweet will He is travelling to different places in Indonesia and bestowing His unlimited grace upon all, especially those who are working hard to please Him.

After the series of cultural acts, Their Lordships were placed upon Their chariots and Jagannathastakam was harmoniously sung followed by arati led by Atmanivedana Swami Maharaj. Coconuts were broken and conch shells were blown in order to invoke auspiciousness. Devotees then pulled the ropes of the chariot and the Lord was on His way for a 2km ride. The kirtan team attracted the public to join in the festival and chant and dance with the devotees. With their cameras and mobile phones, the public were constantly taking pictures of Jagannath and His followers. With the help of a police escort there were fortunately no disturbances throughout the parade. Cookies and fruits offered to Jagannath were distributed to all.

“For the present, you endeavor to make the Rathayatra Festival grand successful. You should arrange the procession and procedure so nicely that all the neighboring people may be attracted to join the procession.” SP letter to Upendra –1st June 1968

At 7pm the chariot arrived in Sumatra Conventional Building where prasad was distribute freely. The atmosphere was surcharged with a positive vibration that could be felt in all directions. The following day the festival appeared in the local newspaper.

“But I have not received any newspaper clippings, which I am very much anxious to see.” SPL to Shyamasundara, 15th July, 1968

The organizers of the Ratha Yatra committee would like to offer their obeisances to His Holiness Kavicandra Swami and His Holiness Ramai Swami, the GBCs for Indonesia. We are grateful for their support and for constantly guiding us in pushing forward Lord Caitanya Mahaprabhu’s Sankirtan movement. We are extremely grateful to His Holiness Subhag Swami Maharaj who has been inspiring us to explore new frontiers in preaching and performing this Jagannath Ratha Yatra in every city in Indonesia for the pleasure of His Divine Grace A.C. Bhaktivedanta Swami Prabhupada. We thank His Holiness Atmanivedana Swami for attending this event and inspiring the devotees. We offer our respects to His Grace Samudrasena das the leader of ISKCON Batam for helping to make this festival a success. Last but not least we thank Sesa das and Rasikananada das for their melodious singing which attracted all.

All the way from Finland

UDGAAR -An Expression of Goodness and Joy

Mindful Leadership – Radhanath Swami Speaks at the Bank of England