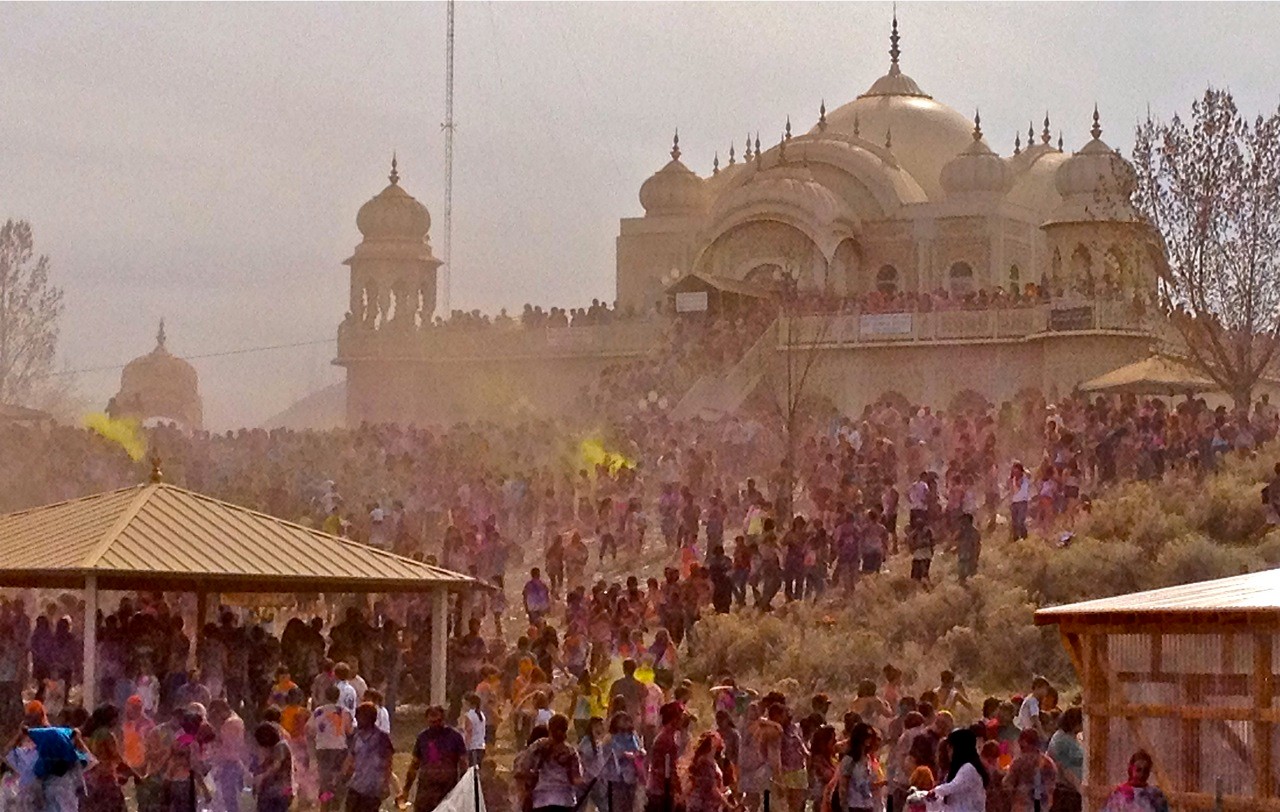 This is an excerpt of an article from Boom Winter 2015, Vol 5, No 4. The full article is available here for subscribers only. Not a subscriber? Click here to change that.

California is experiencing a proliferation of public religious celebrations like never before. Processions spill onto city streets. Altars summoning the spirits of the dead are erected at busy intersections. Bands of pilgrims crisscross the state as they make their sacred journeys to holy lands within our very borders. Images of gods and saints, raised aloft by devotees, now claim the urban skyline as their most natural and obvious backdrop. Mantras, chants, and songs of praise, in a cacophony of languages, summon the sacred into our public space and into our life in common. At these festivals, we pray together after a fashion—an unlikely collection of Californians from different places, different faiths—different backgrounds joined for a fleeting moment by the unity of purpose of a shared ritual. The so-called secular cities and towns of California are made sacred by these multiethnic and multifaith public performances.

The authors of this essay are part of an eclectic group of researchers, students and professors, artists, filmmakers, and journalists. We have spent the better part of three years participating in these public events; we have attended dozens of religious festivals. We have thrown colors at Holi with those who have inherited Hindu traditions and those who have adopted them in the United States. We have processed in the streets of downtown Los Angeles with Peruvian immigrants as they sway to and fro under the heavy weight of their penitential andas. We have wept at altars for the dead on Día de los Muertos. We have joined aging internees on their annual pilgrimage to Manzanar, the Japanese internment camp, where we braced against the harsh winds and dust to chant, dance, and pray for forgiveness for us all.

It’s not just that the spirits cannot be contained in buildings—from tent revivals to solemn masses celebrated in sports stadiums, religious practice has brought the faithful out of doors—but that they prefer to encounter us in town centers, in public parks, open-air settings, and city streets. Across the state, Californians participate in all kinds of public rituals under the sun: rituals of re-enchantment and blessing, rituals of repair, rituals of sober ecstasy. Due in part to their public nature, almost every one of these open-air celebrations is a cross-cultural encounter as we look to each other’s cultures, each other’s religions, especially each other’s gods and spirits to discover our shared identity and our shared future as Californians. Perhaps it is through these experiences that the fears and anxieties generated by the inevitability of a truly multiethnic state are confronted and resolved.

Even as these and many other similar festivals simultaneously represent the irruption and interruption of the sacred in the public sphere, these festivals reflect the multireligious character of immigration. What propels us to put ourselves into these shared religious experiences, to throw ourselves into these festivals of spirits, especially when so often we join to celebrate religious cultures other than our own? The public religious festival has become the central nexus for the celebration of ethnic, cultural, and collective identity—identities that demand representation even in so-called secular public spaces. The festival requires that the participants step outside of their day-to-day lives, and venture into the fields of Radha and Krishna’s love play, the realm of the dead, the remembrance of the past, penance for historical sin, and the ecstasies of devotional singing. When the festival is in the open, in public, the shared act of devotion is what binds, not necessarily the shared belief.

These public rituals say something about the pursuit of belonging in California, and in the United States, within an increasingly diverse and multicultural landscape. Those who participate together as intimate strangers are often seeking only a temporary affiliation, perhaps a place for a moment to engage one another beyond the context of the marketplace. In sharing in these religious and cross-cultural experiences, we become enmeshed in the complicated and vibrant diversity of California, up close and personal, as physical as the bodies we encounter there. These collective public celebrations imagine a new kind of citizenship in a way that can assuage our multiculturalist anxieties. By participating in other religious and cultural realities, we break from the mundane and open up the possibility of enchantment. It is the unknown of the festival that beckons to outsiders—the potential for the experience of the ephemeral, the surreal, the transcendent.

The Hindu Festival of Colors: Throwing Colors with Hare Krishnas in Los Angeles

Tens of thousands of young adults, mostly in their teens and twenties, clamor toward the stage at the spring Festival of Colors in Los Angeles. From a panoply of backgrounds and cultures and beliefs (or no belief at all), they gather to celebrate Holi, to reenact the colorful play of Radha and Krishna, the supreme Hindu expressions of divinity and the enchanters of the world. Radha and Krishna’s love play is relived and remembered in the crowd’s joyful “playing of colors.” As they throw brilliant, chalky handfuls of the multicolored Holi powder at each other, attendees become disguised in vibrant colors—differences of age, race, and ethnicity, their previous identities, erased. Play that begins in streaks of rainbow effervescence soon turns everyone a purplish brown blend of the colored powders.

The Festival of Colors in Southern California attracts only small numbers of Indian Hindus. The organizers of the event are Hare Krishnas, affiliated with the various temples of the International Society for Krishna Consciousness, or ISKCON. The Hare Krishnas have had a long and fraught history in the American countercultural movement. Once the poster children for 1960s white hippie sojourns into Indian mysticism, the group became enmeshed in scandal in the 1970s and 1980s, and then became a major source of religious engagement for Indian Hindus living in diaspora.

The Festival of Colors is the brainchild of the guru Caru Das, a Hare Krishna devotee and the founder of a large Krishna community in Spanish Fork, Utah. As the organizer and producer of the festival, his purpose is to change the trend—to reach beyond the traditional Indian community and try something new among new audiences. Caru Das has created an event that is popular with teens and promoted as “good clean fun,” but he never forgets that its primary purpose is to introduce new souls to Krishna consciousness.

When asked, the majority of attendees at the Festival of Colors say that they are there for the fun of throwing colors. But there are many ways to enjoy a Saturday afternoon, and sweating colored powder in the hot LA sun is only one of them. In the murky, colored mist of the orchestrated hourly color throws, the audience of largely non-Hindu teens have their first experience of Hindu ritual and belief. In simple terms that a young California audience will understand, the festival introduces Hindu and Buddhist ideas, practices, and worldviews—all laced with universalistic ideals of peace, love, and unity. The Festival of Colors motions to Hindu religious practices as emblematic of indigenous roots and ancient wisdom. These sentiments echo those of Swami Vivekananda, who famously preached to American audiences in 1896: “When the Occident wants to learn about the spirit, about God, about the soul, about the meaning and the mystery of this universe, he must sit at the feet of the Orient to learn.”

Traditional temple Hinduism is not what these eager and open young people are experiencing. The Festival of Colors in Los Angeles is more like an ISKCON-inspired evangelical tent revival than any mainstream Hindu practice. Amidst color throws and playful revelry, the guru Caru Das takes the stage to focus the frenetic and playful energy of the crowd with the mahamantra, the central devotional chant of the Hare Krishnas: “Hare Krishna Hare Krishna Krishna Krishna Hare Hare, Hare Rama Hare Rama Rama Rama Hare Hare!” Caru Das actively proselytizes while playing directly to the desires and social proclivities of teens and young adults.

With music, yoga, food, and a playful atmosphere, the Festival of Colors is a brilliant marketing venture that attempts to erase the fraught political history of the Hare Krishnas and bring them back into the mainstream. There, they hope to vie for a position as the representatives par excellence of modern global Hinduism. Under the clever disguise of colored powders, the Festival of Colors represents the new proselytizing successes of ISKCON.

From the stage, Caru Das bellows to the excited crowd:

The Absolute is non-different from His name! So if you spend this day by singing and dancing the various names of the Absolute, you will be associating with the most wise, the most determined power in the universe. And that power will rub off on you and you will make better decisions and you will be in a better place in the future than you would have had you not tapped into this extra power.. . .

To reinforce his point, the guru jubilantly exhorts the crowd to repeat once again: “Hare Krishna Hare Krishna Krishna Krishna Hare Hare.. . . ” Many in the throng are chanting along exuberantly, but others are socializing with their friends and taking selfies of their wildly colorful bodies to post on social media. But to Caru Das, the spiritual impact of the mantra works like fire—it burns whether you believe it will or not.

The G12 Movement – Any Relevance for Vaisnavas?