British Museum: Krishna in the garden of Assam. Meera Khurana,… 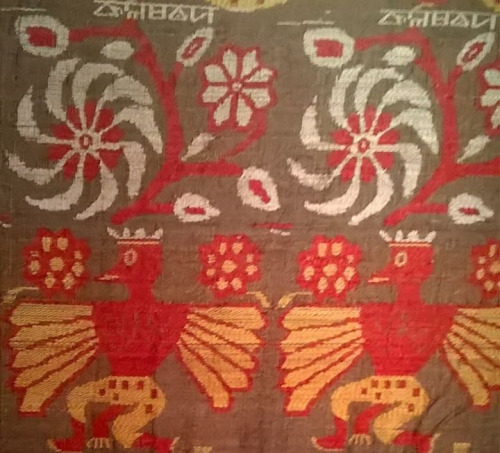 British Museum: Krishna in the garden of Assam.
Meera Khurana, London: The Britsh Museum in London have a beautiful exhibition on called ‘Krishna in the garden of Assam’. It is a display of the ancient 'Vrindavan Vastra’ (Cloth of Vrindavan), made in Assam on tapestry in the late 17th century, depicting Lord Krishna’s pastimes in Vrindavan. The British Museum have owned this since 1905 (over 100 years) and it is finally on public display. It is thought to be the last surviving example of devotional Vaishnava textile art from Assam, made in the late 17th century. Made with woven silk, it is 30 feet long, displaying many of Lord Krishna’s pastimes from Vrindavan, including killing Bakasura, dancing on Kaliya, stealing of the Gopis clothes etc. The dasavatars (10 incarnations) and Garuda are also woven. Below sample shows Garuda. The exhibition is free and is open until 15 August 2016, in the British Museum, London. It is at the back of the Museum - go through the great courtyard, to the north staircase, climb up, past the Indian Gallery, climbing up to room 91. http://www.britishmuseum.org/whats_on/exhibitions/krishna_in_the_garden_of_assam.aspx
The sample in the photo shows Garuda.

Shastrakrit Das: To our surprise, this young man told us how he…