More meetings in Delhi broaden support for the Kazakh case 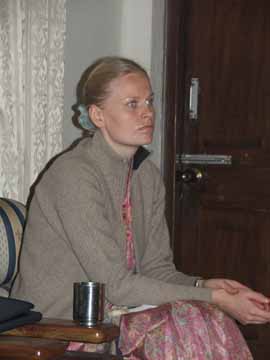 This morning we met with Mr Shubhindra Kulkarni, the former advisor to the Prime Minister. Mr. Kulkarni is a very influential contact, and also a supporter of Govinda Maharaja’s work in Kazakhstan. He has visited Kaz and met with Maharaja before, and also helped with the Russian issue.

Mr. Kulkarni said he had good memories of Kazakhstan, and was distressed to hear of the situation that had developed since his visit. Rati Manjari gave Mr. Kulkarni a very thorough history of the intolerance of the Kaz government towards the Society for Krishna Consciousness, and outlined the legal and land issues that the government was using to persecute devotees. Rati Manjari is a very good speaker and a convincing talker; she captures the attention of everyone she speaks to and is undoubtedly a very powerful part of this campaign. The fact that her house was bulldozed first adds so much weight to her presentation, but her factual delivery and grasp of the entire of situation is convincing.

Govinda Maharaja spoke at length to Mr. Kulkarni, outlining the Kaz Government campaign to take the land away from the devotees. He said in 2005 — after the initial court cases of the year before failed and were thrown out of even the local courts — the Government stepped up their campaign, and in a letter to the Justice Department — mistakenly included in correspondence to the devotees — the Government outlined their systematic plan to drive the devotees off the land and liquidate the property. He also told Mr. Kulkarni of the Religious Committee head’s ridiculous claims on national television that the Hare Krishna religion was an unknown sect, that it was unaccepted in India, that they were a threat to the nation of Kazakhstan, and that they had come to steal from Islam. This is the same woman who was in court last week screaming madly, “THIS HAS NOTHING TO DO WITH RELIGION!!” All these things, Maharaja told Mr.Kulkarni, were designed to create a hate mentality in the minds of Kazakhstanis. He told Mr. Kulkarni that another official yelled at the Kazakhstani devotees in court, “You people have no rights in Kazakhstan!!”, even though they are Kazakhstan nationals. 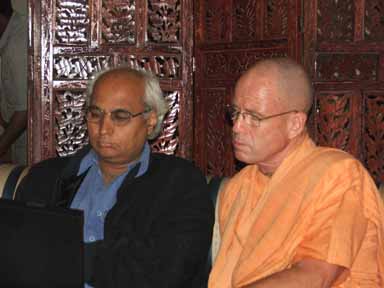 Maharaja also spoke about the Governments mood towards the devotees owning land. For example, when asked why the 9th largest country in the world (Kaz) couldn’t spare 120 acres for this purpose, and why the Government was so intent on taking it away, one official responded, “No! This land is sacred! It is protected by our forefathers!” Another official told Rati Manjari, “If you’d bought land in the middle of the city no one would have cared, but because you have such beautiful land….” It should be noted that the land was a dumpsite beforehand, and in ruin. The devotees made it beautiful themselves. Govinda Maharaja told Mr. Kulkarni that the Government’s mood was “confiscation with no compensation.”

Mr. Kulkarni turned out to be the ‘dynamite’ that this campaign has been awaiting. He encouraged us to contact all religious leaders, particularly Muslim leaders, and as many influential politicians as possible. He said he would speak to the Prime Minister, and encouraged us to pursue a meeting with him. Commenting on the common response by people that “no Indians were involved so it’s not our problem,” Mr. Kulkarni said, “We should not extend secularism just because no Indians were involved.” He said we should ask political leaders, “How can you stay quiet on a matter like this?” and added, “If any other religion was involved — Christian, Muslim, whatever — they would make it out to be a huge international concern.”

He suggested we form a broadbased platform and enlist the support of other religions to all raise their voice in protest. He insisted this was not a Hare Krishna problem, but a human rights and freedom of religion issue that concerned everyone. As the former speech writer for the Prime Minister, Mr. Kulkarni now writes for many newspapers and magazines in India. He said, “I want to write about this myself.” He said in particular we should contact Muslim religious bodies and ask that they condemn this secularism through bodies such as the OIC (Organization of Islam Conference).

He also asked for the notes on the recent Religious Conference that was so highly publicized in Kazakhstan, and said we need to push to the public and government bodies how the Kaz Government has completely and totally reneged on anything they had promoted up to and including the time of the conference, which attracted international religious and media attention, and was a great part of the promotional campaign Nazarbayev used to push his bid for the Chair of OSCE.

All in all, it was a very successful meeting — Indradyumna Swami rated it ten out of ten. It has given the team a lot of direction and huge amount to work on, but an equal amount of encouragement.

After leaving Mr. Kulkarni, we went to Parliament House, where Maharaja met briefly with Seetharama Yachury, MP with the Communist Party, which was an important contact to make. On the way out we met with Nikhil Kumar, MP for Congress, who is a very powerful person. He promised that he would have this heard in Parliament tomorrow and ask the Government to give attention to this issue. Mahamantra prabhu said afterwards that what he says carries a lot of weight and it was very good that Mr. Kumar had taken this up. We also spent some hours in the office of the Deputy Director of Security in Parliament House, Mr. K.S. Mani, who also happens to be initiated by HH Jayapataka Swami. His initiated name is Kesava Kumar Dasa. He was very helpful, incredibly entertaining (look out for some of his stories in Indradyumna Swami’s “Diary of a Travelling Preacher”!), and invited both Maharaja’s to his home to enjoy South Indian prasada (he is from Chennai).

And check these two links for today’s news reports: