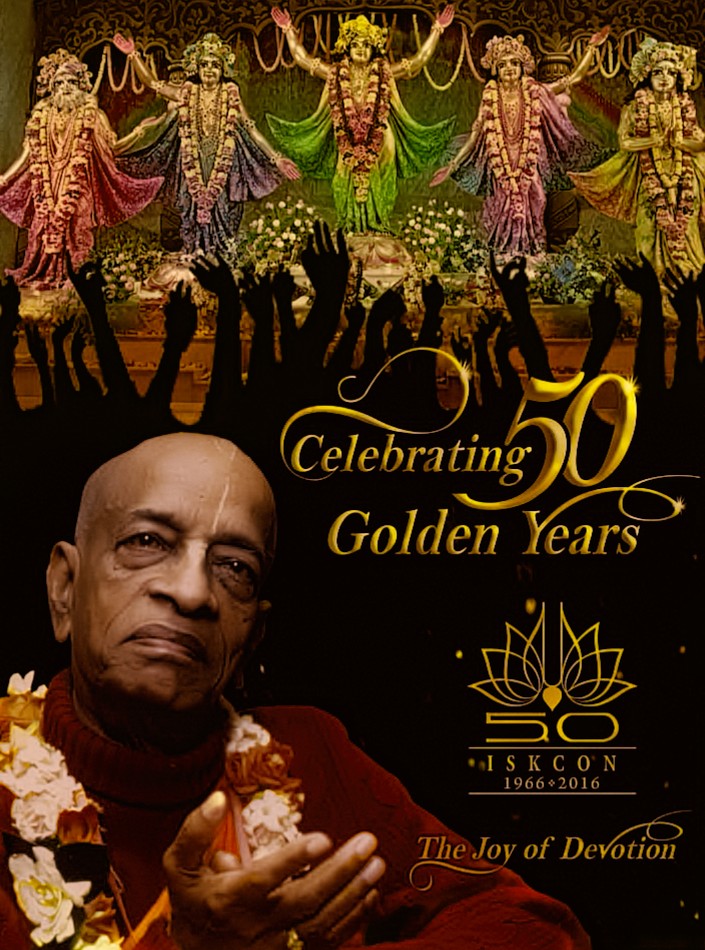 The Global Office for the 50th Anniversary of ISKCON has released 8 new posters and banners as part of their ‘Poster-up’ campaign, and requested all temples and centres around the world to display these posters in prominent locations in their premises. The posters and banners can be downloaded from the ISKCON 50 website by clicking here.

“We have one general poster about the 50th, and seven other posters – one for each of the seven purposes of ISKCON,” said Anuttama Das, GBC Minister for Communications who is part of the International Executive Committee for the 50th Anniversary. “One of the aims of the 50th Anniversary is to educate the general public about ISKCON. The posters depicting the seven purposes will attempt to do that with attractive imagery and relevant information.”

The posters were designed by Paramsiddhi Devi Dasi from ISKCON Ahmedabad with storyboards and visualisation provided by the ISKCON 50 Global Office.

“It is important that all temples around the world start to publicise the 50th anniversary in a structured manner,” said Romapada Das, International Coordinator for the 50th Anniversary. “As part of our public profiling, every temple should start displaying these posters in their premises so that every visitor knows that it is our 50th anniversary year, and understands what ISKCON stands for.”

“The entire experience of designing these posters was an incredible journey,” described Paramsiddhi Devi Dasi. “We had to capture the mood of Prabhupada in each poster, and include images that were relevant to each of the seven purposes of ISKCON. We request all of you to please use these posters to inform your congregation, visitors and other public about ISKCON and its 50th anniversary.”

Temples can simply download the posters from the downloads section of the ISKCON 50 website and print them locally. The Global Office will also be making printed copies available at the special 50th anniversary booth at the ISKCON Leadership Sangha in Mayapur from 24th February to 2nd March 2016. Those who wish to get hard copies can pick them up from the booth.

“Through these posters, I hope that people around the world will understand what Prabhupada envisioned for ISKCON, and start inquiring more to learn about our society’s spectacular achievements in the last fifty years,” concluded Romapada Das. “The 50th is a unique opportunity for us to glorify Prabhupada and to spread the sankirtana movement. Put up these posters so that everyone who comes to your temple starts to ‘think 50 and act 50’!”

ISKCON centres are requested to write to Romapada Das, International Coordinator, 50th anniversary at romapada@iskcon50.org if they need any further information or support about the 50th anniversary.

Harinam in the Philippines