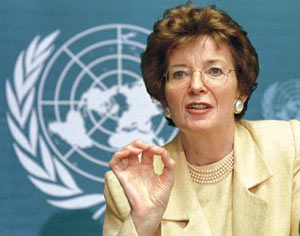 On a flight to the UK on Sunday morning I found myself sitting beside the former President of Ireland Mrs Mary Robinson. After she completed her term as President she became the UN Commissioner for Refugees. Ironicaly it was 16 years to the day on Sunday that she was sworn in as president.

Initially I told her a story that one time in India when I was travelling through some remote villages some of the locals wanted to know where I was from. I told them Ireland but none of them seemed to have heard of it, then suddenly one man jumped up and said “Ah Mary Robinson’s country!” So I told her that she was famous even in the villages of rural India and she much appreciated this.

I then asked her had she heard about the situation in Kazakstan and she said she hadn’t but was very concerned when I informed her. She was aware that Kazakstan was trying to become chair of the OSCE but her view was that they were not ready and would not succed. She also said that their current actions against the devotees would make it even less likely.

She assured me that she would inform her friends in the UN about the situation and give them the web addresses that I gave her. Little drops of water wear away the stone so hopefully Mrs Robinson being informed of the situation will add a few drops of water.

2 Comments to “ Thank you Mrs Robinson”