An Experience of Mayapur Dhama 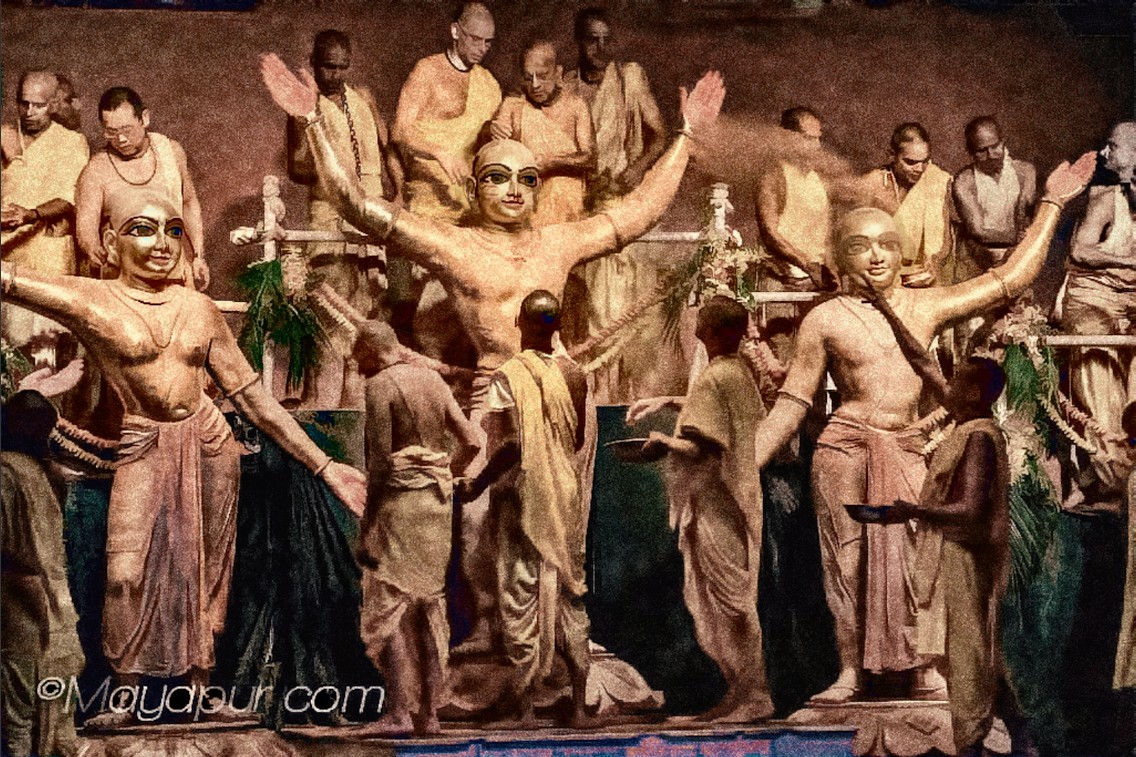 A pilgrimage to ISKCON’s grand complex in Lord Chaitanya’s land provides indelible inspiration for an engineer and his family.

When I entered the spacious temple and looked to the right, I was stunned on seeing the huge and extremely beautiful deities of Radha-Madhava, with four sakhis on each side gazing at the perfect beauty of Lord Madhava and Srimati Radharani and very eager to serve Them. The temple was full of devotees offering ghee lamps, an act that symbolizes how our heart burns in separation from Krishna. My family and I also got ghee lamps and offered them to Radha-Madhava and the eight sakhis.

We then went to the adjoining hall, also spacious. When I saw the huge golden Panca Tattva deities, I couldn’t imagine ever having to leave Mayapur. The devotees’ graceful dancing and the beautiful kirtana enchanted me. And before I could recover, I was in front of the deity of Nrisimha. Dressed in silver, He looked like silver fire. He was so ferocious, and yet so assuring. I don’t remember how many times I offered obeisances to Him, or maybe I didn’t at all.

Thank you, Srila Prabhupada. Even though you were satisfied with whatever Krishna provided to you, you undertook great hardships to create such a beautiful place and a real society of devotees so that people like me would be attracted to spiritual life.

I work in an engineering software company, and I had been attending a Bhagavad-gita class conducted by ISKCON for four months when our teacher invited my family and me for a four-day pilgrimage to Mayapur during the auspicious month of Damodara (Karttika). Mayapur is the birthplace of Chaitanya Mahaprabhu, who in the sixteenth century propagated the chanting of the holy names of Krishna, the recommended spiritual practice for Kali-yuga, the current age.

Our reception at ISKCON Mayapur’s Gada Bhavan was most magnificent. We were garlanded with flowers, and cool sandalwood paste was applied to our foreheads. This is how guests are received in the Vaishnava tradition, said our hosts.

The next day we got up really early and bathed in unheated water. We attended mangala-arati at Prabhupada’s Pushpa Samadhi and then at the Radha-Madhava temple. I completed sixteen rounds of chanting before 7:00 A.M., and I had a full day ahead of me.

While walking to the goshala, we were shown the grihastha quarters and a building that’s home to brahmacharis two months a year. The rest of the year they are out traveling in buses and distributing Prabhupada’s books. We also were told about four schools: one with the CBSE pattern, one with the Cambridge Board, one a girls’ school, and one a Vedic gurukula. The first three have a mixed curriculum, modern with Vedic, but the last is purely Vedic. We were surprised. What about the future of these boys? We learned the answer, a very instructive one, when we went to the gurukula in the evening.

The goshala has four sections: for old cows, younger cows, calves, and bulls. We had kirtana and a wonderful lesson on the importance of cow protection and cow’s milk. Bala Govinda Dasa, our guide and teacher, also told us that Chaitanya Mahaprabhu is not a great saint but the Supreme Personality of Godhead Himself. To make the best of this pilgrimage, he advised us to (a) abstain from prajalpa, or useless mundane talk, (b) chant as much as possible, (c) listen very carefully to the glories of this place, and (d) maximize our association with the devotees.

We felt great honor in feeding the calves with straw and date-sugar balls. The children enjoyed this a great deal. I was thankful to Lord Krishna for His being as accessible and loving to children as to adults. I remembered our visits to many South Indian temples when the children got bored and we couldn’t sustain their enthusiasm. But in Mayapur it was different. The children woke up the parents because they were eager to start the day early.

The evening took us to the Vedic gurukula. The students learn Vedic mathematics, English (and through it, other languages, including Sanskrit), music, martial arts, Vedic mantras, Vaishnava texts, and leadership and organizational skills. They do menial tasks such as cooking, cleaning, washing clothes, and filling water containers. They use only oil lamps at night and cook with cow dung as fuel. We asked them if they worried about their future. They are completely cut off from current affairs and modern education. Even their Vedic degree is not recognized outside ISKCON. What if they decide to do something outside ISKCON?

The answers we got, in the form of rhetorical questions, were an eye-opener: What do we need to a job for? Do we trust our boss more or Krishna more? How did Prabhupada manage in the U.S. with no money? How does a dog survive without current affairs and degrees? How does an ant get its food? Are we worse than dogs or ants?

The answers showed us the depth of these boys’ faith and the shallowness of ours. How can Krishna reciprocate with us when we have no faith in Him? That made us worry. And indeed, by Krishna’s mercy these boys become gurukula teachers, run establishments, and assume important roles that require relational and managerial skills rather than academic degrees.

The next day, after mangala-arati we saw a diorama exhibition of Lord Chaitanya’s pastimes. Then we walked along the road outside the temple campus to board a boat to one of the islands in Navadvipa.

Out of respect for this holy land, I stopped carrying my mobile phone and started walking barefoot, feeling nourished by the cool Mayapur sand under my bare feet.

The boat glided on the whitish Ganga, which met the Jalangi, dark like the Yamuna. On the Jalangi shore we formed a sankirtana party as we walked to Bhaktivinoda Thakura’s house on the island of Godruma-dvipa. We learnt that he had started life in a modest manner and later rose from clerk to magistrate. He was extremely punctual and efficient and thus was respected by the British. To convince him to postpone his retirement, they built a railway line just to ferry him to and from his office. He was the father of ten children. He wrote prolifically in Bengali to bring people the rich Vedic texts in the form of poems and songs. He discovered the birthplace of Lord Chaitanya and built a temple there by collecting mostly small donations from the local people. He eventually organized two thousand village groups for practicing and spreading Krishna consciousness. He is an inspirational, ideal grihastha.

The name of this island (dvipa) comes from the words go (cow) and druma (tree). Long ago, Surabhi, the mother of all cows, performed austerities under a banyan tree here to please Lord Vishnu. In another incident associated with this sacred place, the sage Markandeya once wanted to see Lord Krishna’s maya, or illusory potency. Fulfilling the sage’s request, Krishna flooded the entire world. Markandeya was washed away but landed safely at Godruma-dvipa, the only place above water. There he saw a beautiful baby on a banyan leaf, sucking His own toe. The baby was Krishna, who wanted to experience the taste of His own lotus feet, a taste that steals the hearts of all devotees and great sages. Suddenly, the baby sucked the sage into His stomach, in which the entire universe was visible, and just as suddenly expelled him. Thus Markandeya saw how the entire universe is contained within Lord Krishna while He is simultaneously aloof from it.

We then returned by boat with a stopover for bathing in the Ganga. Mother Ganga flows from the feet of Krishna and is very sacred. People with material eyes cannot see the purity of the Ganga and the spiritual benefits she can provide. We prayed for Mother Ganga’s permission before entering, and while bathing we prayed that her pure water might cleanse our hearts of impurities, which stand in the way of reviving our original Krishna consciousness. The children had a wonderful time in the cool water, and we had tough time getting them out.

In the evening we visited Prabhupada’s samadhi. Its circular shape allows many people at once to view Prabhupada sitting majestically on his altar. Inside the dome, tile mosaics depict various landmark events in Prabhupada’s life. I was touched by the picture of him guiding an American child in writing a Sanskrit letter. On the first floor are dioramas depicting Prabhupada’s life-his own Rathayatra at age four, writing his heartfelt poem expressing his full surrender to Krishna as he reached America, his first public kirtana in the U.S., and so on. At an advanced age, in a foreign land, with almost no money or support, he transformed misguided American youth into spiritual practitioners and leaders, established more than a hundred temples all over the world, and produced dozens of books based on Vaishnava philosophy. How could he do all this? Because he had faith in his guru and Krishna.

After mangala-arati the next morning, we offered our obeisances to the Panca Tattva and thanked them for allowing us to enter the dhama. We prayed for their grace to help us steadily progress in Krishna consciousness. We begged forgiveness for any offenses we may have committed during our pilgrimage. And we requested their permission to leave the dhama.

From the ISKCON complex, a bus took us a short distance to the birthplace of Lord Chaitanya, known as Yoga-pitha. The deities here are Radha-Madhava; Chaitanya Mahaprabhu with His consorts (Vishnupriya and Lakshmipriya); Sri Jagannatha Misra and Saci Devi, Lord Chaitanya’s parents; and the Adhokshaja (Vishnu) deity worshiped by Lord Chaitanya’s parents and discovered by Bhaktivinoda Thakura while the temple foundation was being dug.

After spending some time at Yoga-pitha, we prayed to Lord Chaitanya for love of Krishna and left for ISKCON’s Jagannatha temple in Simanta-dvipa, a little farther up the road. Before entering the temple we heard from Murari Dasa about the appearance of Jagannatha, Baladeva and Subhadra there, and how the temple came under the care of ISKCON. The place gives devotees the same spiritual benefit as visiting the Jagannatha temple in Puri. The island’s name refers to a time when Goddess Parvati prayed here to Lord Chaitanya. When the Lord appeared, she put the dust from under His feet on the part (simanta) of her hair.

Back in Kolkata, I realized that Mayapur is an example of how one can live a completely spiritual life right here in the material world. “O Lord!” I prayed. “When can I return to Mayapur?” And I recalled the caption I’d seen under a picture of ISKCON Mayapur’s Sri Radha-Madhava: “Meet your new boss.”

A New Species of Humanity

Relativity and the Path to the Absolute