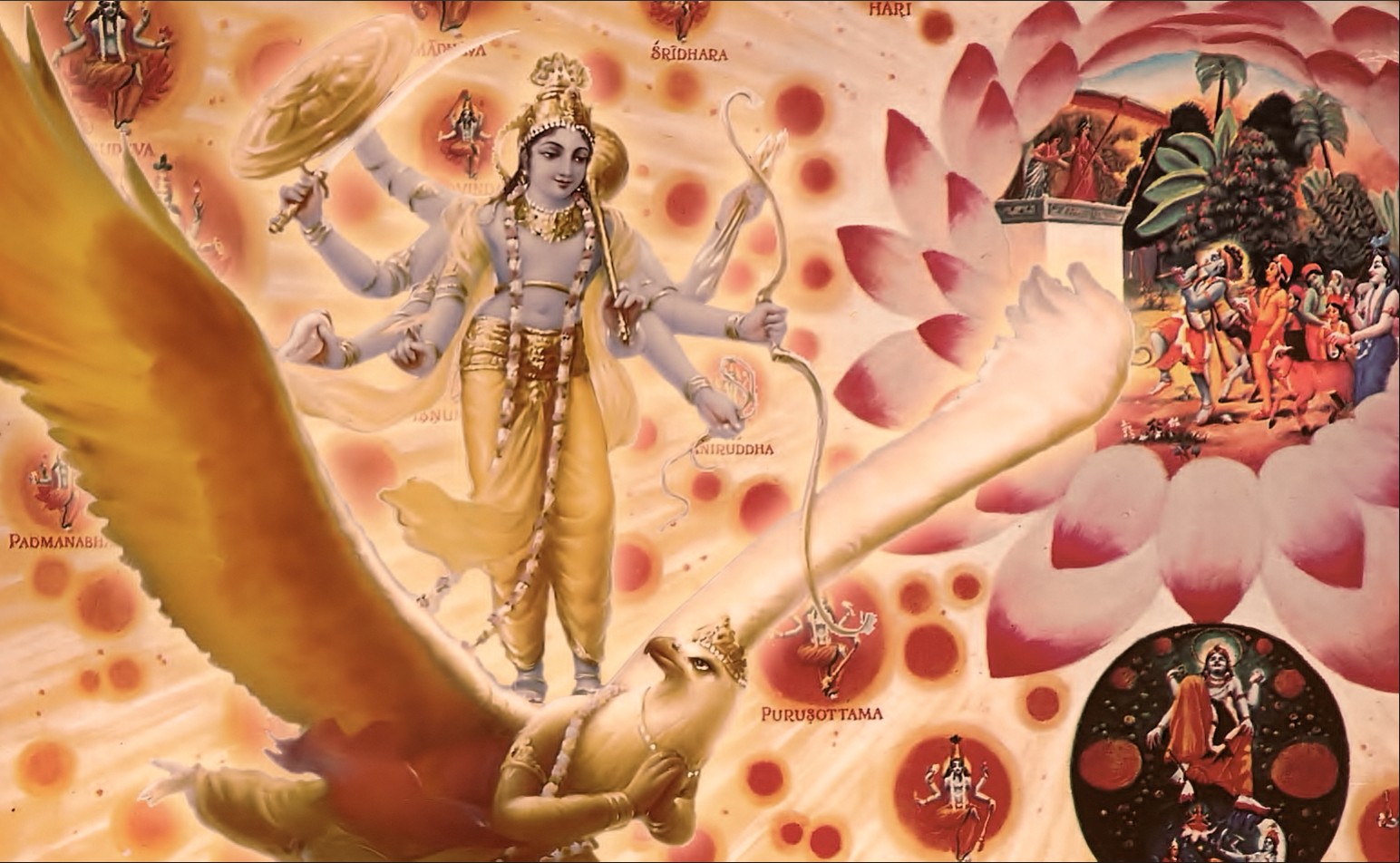 Our life depends on air, and when we recognize it as one of the energies of Krsna, it can remind us of Him.

Sweat gathers on my lower back, and my clothes stick to my skin. Then the leaves of nearby trees shiver to announce the coming relief of a breeze. I consider how the air I’m perceiving outside me also moves within me, and I think of how air carries smells, fills our lungs, nourishes our cells, flies our kites and airplanes, and presses with strong but unperceived force on our skin.
Thinking about air can easily remind us of Krsna, the Supreme Lord. Air is one of the Lord’s energies, as listed in scriptures such as the Bhagavad-gita and Brahma-samhita. When Arjuna sees Krsna’s universal form, he says, “You are air, fire, and water!” Krsna eternally exists as the Supreme Personality of Godhead, separate from His energies, but those energies, Vaisnava philosophers explain, should be considered identical with Krsna Himself. Any of His energies, therefore, can be an impetus for bhakti-yoga uniting with Him through devotional service.
The qualities of air can remind us of the Lord’s personal qualities. Some philosophers conclude that God is without qualities a formless, merely existent energy. Since God is complete, however, He must have a personality with qualities. Since He is the source of everything, everything must exist in Him in some way. Since we, God’s creation, have attributes, it is reasonable to conclude that our source also has qualities.

One of the most obvious qualities of the air is its subtlety. Although air is all around us, pushing on our body with a pressure of fifteen pounds per square inch (one kilogram per square centimeter), we are practically oblivious of it. We usually breathe unconsciously too, so subtle is the air moving in and out of our lungs. We see air only through its effects, such as when it moves branches and straw or carries smoke and water vapor.

Krsna too is almost imperceptible to a materially conditioned soul, visible only by His effects. We see His handiwork in a flower’s beauty or the predictability of the planets’ movements, but we do not see Him. The natural laws on which we base our math and science imply a lawmaker. But much of the nature of that lawmaker stays unknown.

Subtle air can move things that to our senses are far more substantial than air. Violent air in tornados and other storms can throw buildings afar and push wood splinters into metal. Similarly, with only the indiscernible movement of His will, Krsna can move, shape, change, and scatter everything we can perceive.

On the spiritual plane, the gentle gust of a whisper of His name, heard or spoken with merely a shadow of affection for Him, can move Him to dismantle a steel-framed heart, turning anger and lust into spiritual love.

In our experience, air is everywhere, as is Krsna. And just as air carries other substances without mixing with them, so Krsna stays aloof and unaffected even though He is in the heart of every living being and within every atom. Air carries heavenly fragrances from flower gardens and putrid smells from rubbish heaps, but the air is neutral. Similarly, Krsna responds to our desires and actions yet remains unattached. If we act in violent and rancid ways, He carries us to lower planets. If we act in pious and fragrant ways, He carries us to heaven.
Air is the element we can do without for the shortest period. Our other bodily needs water, food, shelter, warmth have no value if we have no air. We certainly cannot think of meeting our social, mental, emotional, and intellectual needs without a constant supply of air.

Similarly, our relationship with Krsna is our primary need. Without a conscious, deliberate, and loving relationship with the Lord, nothing else gives us full satisfaction. How can we enjoy a delicious meal in the company of loving friends if we’re suffocating? Persons who entirely neglect their relationship with God, or put that relationship as anything but a top priority, find that the good and pleasurable things in their lives fail to give them the satisfaction they expect. While such people often try to adjust what and how they enjoy, they rarely consider that the real solution is as basic as breathing.

Furthermore, because Krsna is complete, making one’s relationship with Him the top priority brings automatic satisfaction of all other needs. One can then deal with the world from a position of inner peace and joy. A person in such a position has complete freedom, not dependent on anyone or anything for satisfaction.

Air provides oxygen for our digestion, bringing nourishment and health to our cells. Krsna says in the Gita that He joins with the outgoing and incoming air of life to digest our food. For souls who have fully given themselves to Him with love, He delivers all they need while maintaining what they have. He supplies the necessities for all others too, giving food and shelter even to lowly and poisonous creatures.

The movement of air seems to make plants and trees dance and forms attractive patterns in water and sand. Blowing air sculpts rock into works of art. We are reminded that Krsna’s movements are as graceful as a dance and that He likes to dress as if He is a dancing actor about to go on stage. His dancing with His pure devotees in the spiritual world is perfectly choreographed more graceful, soothing, complex, exciting, and intricate than the swirling waves of a stream whipped by the wind.

In His form as Visnu, Krsna rides through the air standing on the back of the giant eagle Garuda. From there, He sometimes fights battles with demons, such as those in the great cosmic fight for a jug of nectar.

To create the material world, Krsna expands Himself into the gigantic form of Maha-Visnu, resting on the causal ocean. As the Lord breathes out, universes come from Him and gradually expand. When He breathes in, the universes gradually reenter His transcendent form. We are presently living in one of those universes, riding on the Lord’s breath.

When increasing materialism periodically covers spiritual knowledge, Krsna comes in various incarnations to set things right. One incarnation, Hayagriva, is a golden humanlike form with the head of a horse. The air He breathes from His divine nostrils is the sweet sounds of Vedic wisdom, given to Brahma, the first created being in the universe. Because any of Krsna’s senses can perform the action of any other sense, He can sing sweetly with puffs of air from His nose.

At the beginning of the universe, Brahma searched for knowledge of himself, his duty, and the nature of the cosmos. After meditating for thousands of years, he heard Krsna breathe in his heart. Krsna’s breath had flowed through His flute and transformed into the Gayatri mantra, which then came out of Brahma’s mouth as Vedic knowledge.

Everything in the spiritual world is conscious, including Lord Krsna’s flute, His constant companion and intimate devotee. Krsna blows on His flute to herd His cows. The music bewilders even expert musicians on heavenly planets and induces a contrary nature rivers flow backward, rocks melt, while animals and people become stunned in ecstasy. The great devotee Bhaktivinoda Êhakura, the father of Srila Prabhupada’s spiritual master, wrote in Gitavali that Krsna abducts the mind of His devotees with the enchanting songs of His flute as well by His sweet bodily fragrance, which are both blowing in relentless waves upon the wind.

Many people ask how they can absorb their minds and hearts in the Supreme Lord, Krsna, while being busy in the world. Family, work, studies all seem to distract from the spiritual. But spiritual life can be as close as our every breath of air.