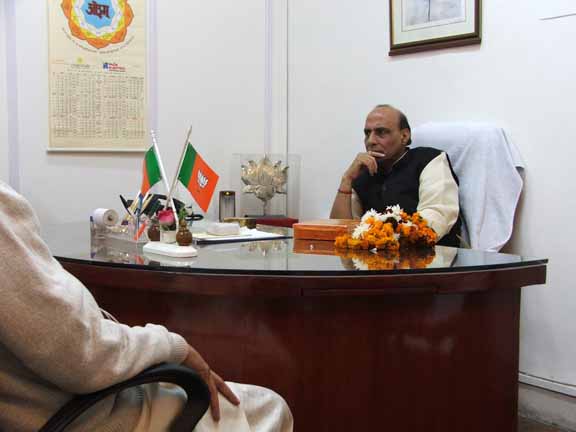 The first meeting this morning was with Mr. Rajnath Singh, President of the BJP party. A lot of the people we meet or will have contact with are from the BJP. Although they are not currently in power, as the opposing party they generate Parliamentary interest in an issue and can pressure the Government into taking action, so their involvement and support is crucial. Mr. Singh guaranteed that their party will not let this issue rest, that they will take it to the floor again tomorrow, and will arrange another demonstration outside the Kazakhstan Embassy.

We then met with Dr. A. Mallick, Deputy Dean of the Jamia Millia Islamia University. He has met with Govinda Maharaja before, and has visited Kazakhstan. Govinda Maharaja said that despite one US Embassy official expressing his surprise at how this issue has become so high profile internationally, the President of Kazakhstan still has not responded. Dr Mallick asked, “Why hasn’t Nazarbayeva responded? He is the President. He’s the person who is meant to respond, yes?” Dr. Mallick was briefed by Govinda Maharaja and Rati Manjari, and Maharaja explained to Dr. Mallick that any religion in Kaz is harassed except the mainstream Muslim religion which has been pronounced official by the Kaz govt and the Orthodox Russian Church: even other Muslim branches are harassed. Dr. Mallick responded, “If people know what religion is, there is no need for doing the things such as they have done to ISKCON in Kazakhstan. Isn’t that right?” He added, “We will do everything we can, our level best…I will write letters to our religious leaders and request them to step in. This should not be happening in ISKCON or anywhere else.” It was a good meeting — the support of Muslim leaders, as well as all other religions, is helpful in making it clear that this is a religious intolerance issue, not a land or legal one. Govinda Maharaja told Dr. Mallick, “Prime Minister Tony Blair has acted, US Embassies have acted, the State Department has responded: now it is up to this wealthy and great nation of India to show the democratic process of exercising religious freedom and show people how things should be done.” Dr. Mallick assured Maharaja, “Any time you need, I am at your disposal.”

Maharaja and Dr. Mallick also spoke of HH Bhakti Svarupa Damodara Maharaja, whom Dr. Mallick knew well. Maharaja said, “He did great work in the fusion of spiritual and scientific fields.” Dr. Mallick admired His Holiness as a great scientist and bhakta.

At the end of the meeting, Maharaja told Dr. Mallick, “I am going to have to enrol in your institution to learn the art of conflict resolution!”

Late afternoon and we were back at Parliament House, this time to meet with Mr. Anand Sharma, the Minister of State for External Affairs, and the Joint Secretary for External Affairs Ministry, Dr. Bhagawati. This was possibly the most important meeting to date: both these gentlemen can take the issue straight to the top, via the most swift channels. They are awaiting the receipt of a fax update from the US Embassy released last night, and will act as soon as that is in their possession.

In summary, all things are coming together very well, and with all the contacts lined up, informed, and ready to act, it is only a matter of days before we can expect the Indian Government to officially respond to this situation in Kazakhstan and hopefully drive this situation to the level of international exposure it needs in order to be resolved. 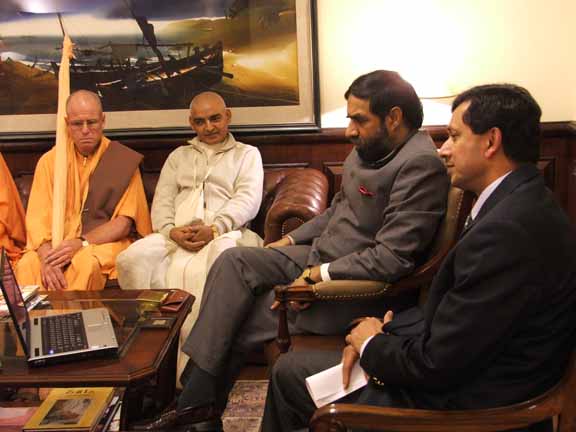