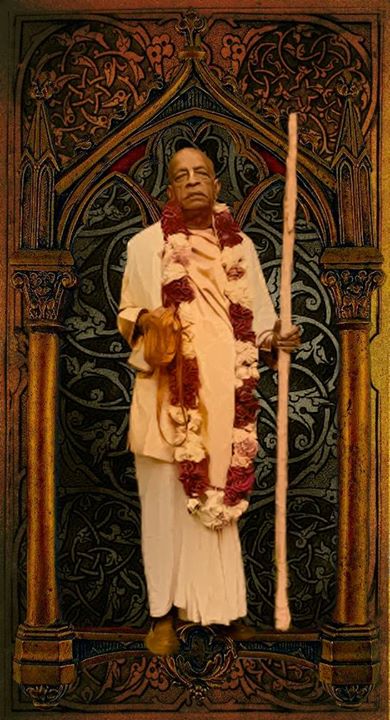 January 31. ISKCON 50 – S.Prabhupada Daily Meditations.
Satsvarupa dasa Goswami: Appreciating His Teachings.
Prabhupada can mediate between Krishna and the individual soul. For example, he explains how we can offer Krishna whatever we eat, and how the main ingredient in our offering is our devotion. Prabhupada comments, “If you offer something to Krishna: ‘Krishna, I have brought a very palatable dish for You to eat’ – no, Krishna will not take it. Nahamprakasah sarvasya yoga-maya-samavrtah. He is not exposed to everyone.”
There are different levels of understanding Prabhupada’s teachings. A newcomer will be amazed that Krishna will accept offerings of food. Someone who has been hearing and serving Prabhupada for more years will hear with added depth and richness. Such a person is trained to hear and consider more the subtleties of the philosophy. For example, Prabhupada quoted the verse “nahamprakasah” in the context of offering food to Krishna. The nahamprakasah verse tells us that Krishna places a curtain of maya between Himself and foolish persons. To quote that verse immediately after saying that Krishna accepts offerings made in devotion, produces an interesting contrast. Prabhupada’s point is that if we try to give Krishna something materially opulent to impress us, He will not accept it, because nahamprakasah sarvasya– Krishna puts a barrier between Himself and such fools.
To read the entire article click here: http://www.dandavats.com/?p=20490&page=4

Our propaganda is to make people Krishna Conscious! Srila…