Where did we begin our karma and when and why? Answer by… 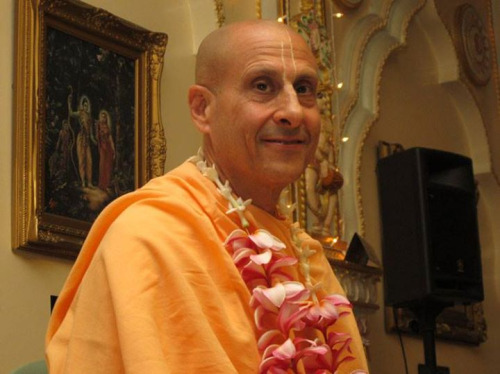 Where did we begin our karma and when and why?
Answer by Radhanath Swami: I will answer briefly because this is the very long explanation but i.e. certain point in our existence as part and parcel of Lord Krsna. We have given free choice to either serve Krsna and love Krsna or to exploit what is the property of Krsna. When you made that choice you have given entrance into the material creation. And in the very beginning at the don of our existence in material creation we began to perform activities in the realm of exploitation and then our karma begins. Sometimes we exploit in a pious way and we get good karma. Sometimes we exploit in an impious way and we create bad karma. But Srila Prabhupada rarely would become very specific in regard to this question of our origin in this material creation. In fact generally when devotees would ask him he would very purposely answered in an indirect way. Generally when people would ask him this question he would say the problem is you are in Maya. Now how you got here its not so important what’s important is to get out. The Scriptures explain in specific detail how we come here. But Srila Prabhupada he would say if you are drowning in an ocean and someone comes to throw you a life preserver while sitting on the boat and says- come, I will pull you up to the boat and you say- wait! first I want to know when I fell on the ocean and why I fell on the ocean. Mean while there is sharks surrounding you ready to eat you alive. In the same way the shark of death is ready to devour us. It is not so important to understand why and how we came but it’s essential to hold on to the life raft and to get out. How our karma began through perhaps millions and millions and millions of births it has developed but the point i.e. of concern now is you have the opportunity to be free from all karma now. Krsna says in Gita- Abandon all varieties of religion, abandon all varieties of speculation and just surrender to Me. I shall protect you from all sinful reactions of whatever you have done, whenever you have done.
Always think of Me, become My devotee, worship Me and offer your homage unto Me. In this way you will come to Me without fail. I promise you this. So guru maharaj put all the emphasis on the here and now. Here is the life raft the association of devotees, the Holy Name, his transcendental books which teaches us how to live in such a way today by which can get out. And as far as he was concern the only real subject matter of any importance in regard to our origin in this material existence is that we misuse our independence exactly when, exactly how is not important. So what is important is we have misuse our independence? And why is it so important because we are still misusing our independence. So let us utilizes this independence for Krsna and become librated from the cycle of birth and death because you see theoretically we can explain these things but you will not understand it until you Back Home Back to Godhead. Ha… So therefore our concern is- you Back Home Back to Godhead and understand that realization and not put so much effort on trying to theoretically understand what we can’t understand. Is that answers question? So chant Hare Krsna Be Happy. Go Back Home Back to Godhead. You may have been worm, you may have been snake, you may have been reptile, a bird, a pig, a human being, a Mataji so many things. This is anything wrong with Mataji now you are brahmachari matajis are devotees you know all devotees we were so many things, we don’t care for any what we been we are concern with where we are going. Where been in this life. We are not concerned. Jagai and Madhai sinful didn’t matter when they took to Krishna Consciousness they became pure, pure than the pure. Doesn’t matter what we have done, where we come from all that matters is where we are going. So take Krsna. Lord Nityananda prayed in this way. Take Krsna. The only price is that you accepting with faith. Hare Krsna.