Walking on the Moon..? 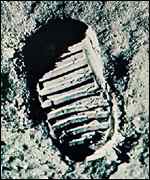 Recently I saw a documentary which said there is a growing number of people who are convinced that the NASA moon landing in 1969 was actually a very clever hoax. This subject matter is naturally interesting to many devotees because Srila Prabhupada himself was doubtful about the moon landing- – but more on that later.

Much of the evidence put forward on the programme comes in the form of an analysis of photographic materials, showing shadows that are said not to be consistent with sunlight. Shadows fall at different angles and at different lengths in the same pictures, as though illuminated by a light source close to the scene, or even by multiple light sources resembling studio floor lights. And the sides of astronauts facing away from the Sun are illuminated as if by fill-in lighting.

It has also been pointed out that the pictures are perfectly framed and exposed even though the cameras used had no viewfinder or exposure meter and were strapped to the astronauts’ chests. Questions are also asked about the performance of film at temperatures that would vary between 118 °C and -82 °C. And, they say, there are numerous inconsistencies between the live TV record and the photographs that were published later. It is also claimed that some photographs of the journey are actually re-vamped versions of training sessions that took place several years previously.

The classic picture taken by Neil Armstrong of Buzz Aldrin, with Armstrong reflected in Aldrin’s visor, is worthy of particular attention. The angle of view suggests that the camera is looking down on Aldrin – and is a lot higher than Armstrong’s camera.

However, NASA and independent scientists dismiss these arguments. The lighting looks odd because light bounces around in the thin atmosphere of the Moon, they say. The reason that the published photographs are of good quality is that they were chosen for that reason – there were large numbers of poor shots. And Armstrong was on “higher ground” than Aldrin when he took that famous shot. The descent engine, they say, did not cause disturbance on the dusty surface because at the latter landing stages, the Module used side-boosters and not the main booster pointing directly downwards.

This is certainly something to think about! Sadaputa das, in his book “Vedic Cosmography and Astronomy” writes on this subject in a sub-chapter entitled ‘Moon Flight’. I will summarise its contents here:
Srila Prabhupada often said that the astronauts have never actually visited the moon. His reasoning was that 1) Demigods do not allow human beings to enter the higher planets because human beings are not qualified to do so. 2) The astronauts did not experience the celestial opulences actually existing on the moon, and therefore could not have gone there.

Srila Prabhupada also described the attempt of the scientists to reach the moon as being as demoniac as the attack of Rahu (SB 5.24.3p), and said that such travel will be barred by Indra. In SB 6.4.6p and 8.5.34p he comments that since the moon-god is the presiding deity of vegetation, there must be vegetation on the moon, and yet the scientists say it is a barren desert.

Srila Prabhupada also made statements suggesting that higher-dimensional/ subtle forms of travel is needed to reach the moon and he refers to the futility of trying to use mechanical spacecraft. Finally, he indicated that to reach the moon it is first necessary to cross the Manasa Lake and Sumeru Mountain.

So as ISKCON devotees we are now left with various possibilites:
1) Astronauts did indeed land on the moon, but they did not perceive the world of the demigods (Candraloka) because it is invisible to gross sense perception.
2) The astronauts were deluded by the demigods at some stage in their journey and diverted to the planet Rahu. (SB 4.29.69p)
3) [Possibility suggested by Radha Mohan das]: They did land on the moon, and did perceive some ‘supernatural’ activity, if to a small degree, but NASA have kept it quiet.
4) The entire moon landing story is a complete conspiracy which has fooled millions of people all over the world for the last 30 years. Some say that they filmed the ‘moon’s surface’ in the Arizona desert and the astronauts have been paid considerable sums of money to ‘live the lie’.

Perhaps in the near future we will never know for sure, but it is logical to suggest that at some time in the future we will. If the truth is indeed different to how NASA has been portraying it, ISKCON is in a primal position to say “I told you so!”

Retraction
Another day in Delhi visiting Ministers and Parliamentary representatives

Teaching evolution in schools: what science explains and what explains science