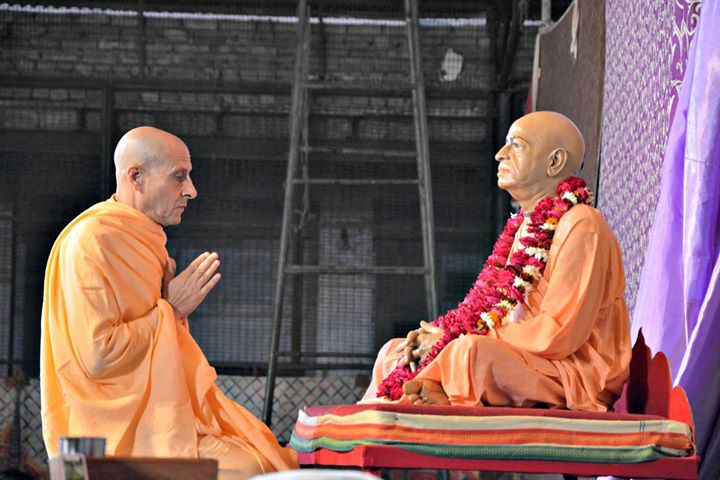 The real meaning of (Saint) Valentine Day.
Radhanath Swami: When I was young, no one called it Valentines Day, everyone called it Saint Valentines day. You remember? Now they just call it Valentines Day because they don’t want to think about saints (laughter). Because it’s actually totally contradictory to the whole conception of what valentine’s day is all about. Who was saint valentine?
There were 2 saint valentines. And they were both celibate monks how were preachers of God consciousness. One of them was a catholic priest who lived in Rome and who preached the message of love of God with such enthusiasm and there was so much opposition against him, he lived in the second half of the 3rd century; that means just two and a half hundred years after Jesus Christ. And even though preaching of Christianity was against the law, it was a criminal activity, he was preaching, he was risking his life and he was brahmachari. He was a priest, he sacrificed family life, any relationship with sex, for the sake of preaching the instructions of love for God and he was captured, he was tortured and he was killed. He’s one of the great martyrs of the Catholic Church.
And then the second saint Valentine, he was a bishop in the catholic church. He was also a celibate monk, who dedicated his whole life to God consciousness, and he was a preacher, and he was also captured tortured and killed because he wouldn’t give up preaching devotion to God. Saint valentine, these 2 great personalities, the sacrificed all the pleasures of this world, life itself to serve God.
So you may be wondering, what that has to do with Valentines day in Bombay today. I don’t see any celibate is giving valentines, at least they are not supposed to. But saint valentine was celibate. He respected every woman as his mother. But a little later because the day, both these saint Valentines were killed, were murdered, was February 14th. So in England and France February 14th is the middle of the second month of the year. It’s like the beginning of spring. Yes?
Tomorrow we’re celebrating basant panchami, beginning of spring. Now what people saw is just in this spring is begging, Feb 14th they saw male and female birds meeting in the trees and mating. It’s the mating season. The inauguration of the mating season for the birds and the beasts. So devotees see it for what it is. But romantic materialists they are very attracted to this when theys see a male bird and a female bird biting each other with their beaks and having sex life. This is considered something very nice. So since the middle of Feb. is the day when the birds mate, they were thinking that we should consecrate this day as the day of showing your passionate love to others because that’s what the birds do on this day, And it happened to be the day on which saint valentine was murdered, so it came to be known as saint valentines day. Hare Krishna. So really what saint valentines day is all about for a religious person is giving up everything, being willing to undergo torture and killing in the service of the lord. That’s what Valentines day means to a vaisnava, or to a devotee. But to a materialistic person Saint Valentine’s Day means following in the footsteps of the lusty birds. Hare Krishna