Is Krsna Our Master or Our Servant? 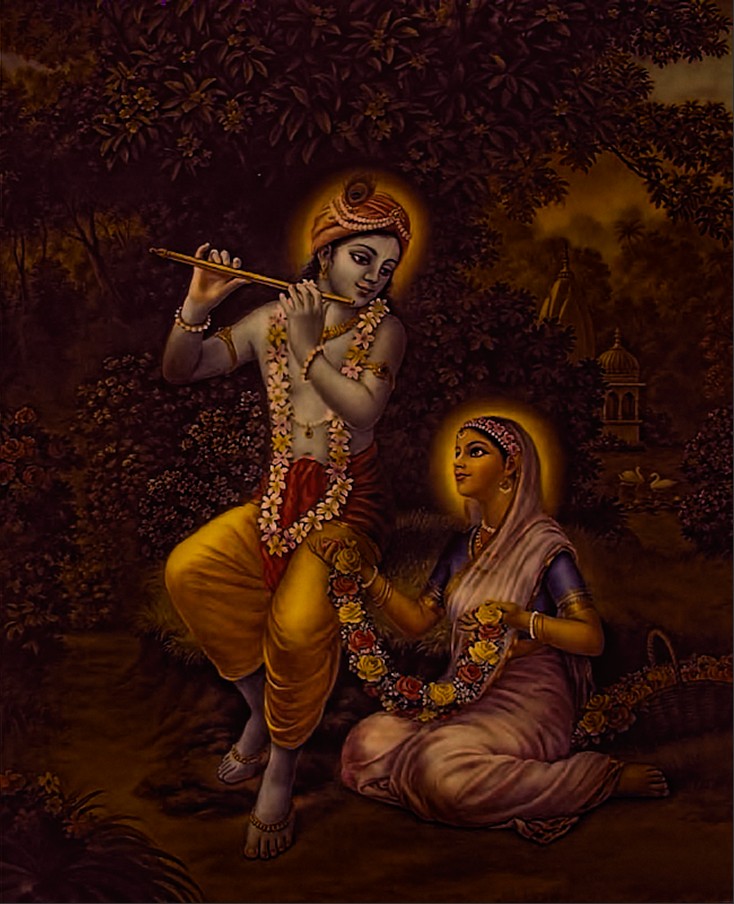 Because Krsna’s name has immense spiritual power, we must be careful how we use it.

This article discusses the offense of sinning while relying on the power of the holy names to protect one from the reactions to the sin.

The students of my Government class and I sat hushed, without even rustling papers, listening to the amazing story in the courtroom. At least it amazed these fifteen- and sixteen-year-old students whose lives never touched those of drug addicts and criminals.

“You’ve broken your probation three times,” the stern judge said. He leaned forward on the desk and glared at the man in shackles and bright orange prison clothes. “You’ve had to go to a drug-rehabilitation program. Each time you start the program, but then you leave.

Do you know the penalty for breaking probation?”

The young accused with muscular arms and a nearly shaved head stood straight like a soldier and said nothing. He almost succeeded in appearing repentant. At least the judge might have thought so.

“No, your honor. I just hated that treatment program I was sentenced to. I’d like a chance at another kind of program. Please. One last chance. If it’s the program I’m asking for, I’ll definitely stick with it and kick this cocaine for good.”

The court reporter held her fingers above the keys. No one moved.

“Okay,” the judge said, still leaning forward with his full weight on his arms.

We all realized we hadn’t breathed for a minute or so. Now a cough, now a shuffle.

“But this is your last chance!” the judge almost spat out, and we either slightly jumped or suddenly leaned forward. “You cannot keep breaking probation and asking for another chance. This is it. Make it good.”

He broke eye contact and turned to the papers on his desk.

And the prisoner left to complete the procedures.

Was this criminal ready for reformation? Or was he just using the judge’s mercy to try to cheat the system? We didn’t follow up on the case, but we doubted the young man’s motives.

Like the judge, Krsna and saintly persons, including the guru who takes responsibility to bring us to Krsna, are happy to forgive our mistakes, even grievous sins. But what if we deliberately use the Lord, His servants, or any aspect of His service especially the chanting of His name to get relief from sins? Then Krsna will cease His leniency and block our realization of Him, because we’re trying to engage Him as our servant.

In 1992, Charles H. Keating, Jr., was found guilty of stealing over a quarter of a billion dollars through fraud. He gave at least a million dollars of this, much taken from others’ life savings, to Mother Teresa to help the poor of Calcutta. The District Attorney who prosecuted Mr. Keating wrote to Mother Teresa asking her to give the donation back to the crime victims.

“It is not uncommon for ‘con’ men to be generous with family, friends and charities,” the District Attorney wrote. “Perhaps they believe that their generosity will purchase love, respect or forgiveness. However, the time when the purchase of ‘indulgences’ as an acceptable method of seeking forgiveness died with the Reformation. No church, no charity, no organization should allow itself to be used as salve for the conscience of the criminal.”

The District Attorney was referring to the Protestant Reformation, which was largely fueled by objection to “indulgences,” where in exchange for donations the Church would promise remission of punishment for sin.

The mentality of using religion or spiritual practice to avoid punishment is often called the worst offense to the Lord; it blocks our spiritual progress. Srila Prabhupada termed this offense, when applied to the chanting of the Lord’s holy name, “sinning on the strength of chanting.” There is no remedy if a person schemes to defraud the Lord in this way. One who thinks “I’ll do this bad thing and then chant Hare Krsna to be excused” will find that Krsna will put obstacles on his or her path, especially if the sin or crime was done against the Lord’s devotee.

Generally, if a person is constantly serving Krsna and chanting Hare Krsna, Hare Krsna, Krsna Krsna, Hare Hare/ Hare Rama, Hare Rama, Rama Rama, Hare Hare, the very process of chanting and performing other service to Krsna will gradually render offenses and sins ineffective. But if one takes advantage of the protection offered by chanting, one’s chanting will remain just alphabet sounds Krsna will not manifest Himself there.

What, exactly, do we mean by “sin,” and is there a difference between deliberate and accidental sin?

Some definitions Srila Prabhupada gives us are “breaking the laws of nature,””deepening involvement in the complexities of material nature,” and doing something that “leads us away from the Supreme Lord.” Once we understand that our most essential nature is loving service to Krsna, anything other than that, or anything opposed to it, is sin. Sin isn’t exactly something bad that God doesn’t want you to do because He’s a cruel rule-enforcer, but it’s something that causes misery because it’s against one’s very self.

For example, the nature of the human body is to digest organic material, especially fruits, grains, vegetables, and so forth. If we choose to eat Styrofoam, we do something against the nature or “law” of the body and will therefore suffer. Similarly, anything we think, say, or do that doesn’t nourish our love for Krsna is spiritually indigestible and brings the pain of material involvement, which is disease for the soul.

A person whose consciousness is in disharmony with Krsna may not know, however, what is and is not in accordance with spiritual reality. Therefore bona fide scripture lists condemned acts that require atonement. These acts of the body, mind, or speech are sins.

Certainly one who hasn’t attained the pinnacle of purity is living in an interim state between sin and a pure life. While striving for purity, we retain mental impressions of sin and a strong tendency to use the body, mind, and words in ways that take us away from Krsna. Srila Visvanatha CakravartiThakura writes in Madhurya Kadambini, “Seeing that material enjoyment is forcibly carrying him away and impairing his steadiness in serving Krsna, the devotee resolves to renounce his addictions and take shelter of the holy name. But many times the attempt at renunciation ends in enjoying what he is trying to renounce.”

This struggle with our persistent tendency to turn away from Krsna is not a block if we continually take up the challenge to improve. Krsna explains: “Having awakened faith in topics about Me, My devotee is disgusted with all material activities, knowing that sense gratification leads to misery. Still, though he tries he is unable to give up his material desires and sometimes engages in the same sense enjoyment that brings only misery. But, repenting such activities, he should worship Me with love, faith, and firm conviction.” (Srimad-Bhagavatam 11.20.27-28)

Srila Prabhupada writes: “An ordinary man with firm faith in the eternal injunctions of the Lord, even though unable to execute such orders, becomes liberated from the bondage of the law of karma. In the beginning of Krsna consciousness, one may not fully discharge the injunctions of the Lord, but because one is not resentful of this principle and works sincerely without consideration of defeat and hopelessness, he will surely be promoted to the stage of pure Krsna consciousness.” (Bhagavad-gita As It Is3.31, Purport)

Minor sins that we commit as we struggle to advance are considered accidental. By repentance we should burn the reaction to those sins. But if we sin thinking that either ordinary religious penance or transcendental activities such as chanting will deliver us from the reaction, the reaction will increase rather than decrease.

If a person externally takes on the appearance of a religious or saintly person while still secretly doing materialistic activities for sense pleasure, such behavior is also sinning on the strength of chanting. There are more subtle aspects as well. For example, we may think, “I’m a devotee of Krsna and please Him in so many ways. If I just do this little thing wrong, surely He’ll overlook it.”

For our chanting to have full effect, therefore, we must throw out the cheating tendency if it even sticks its toenail into the doorway of our mind. If we find ourselves planning to use Krsna and His name to cover our devious purposes, we should strongly call to Krsna for protection. Our gurus both the one who has initiated us into the chanting and those who give us relevant spiritual instruction are our guardians and will also chase away the thieves of sin and cheating if we loudly and strongly beg for their help.

A remedy for all obstacles is the regular, close companionship of pure devotees of Krsna. Their examples and teachings help us recognize our difficulties and desire to be free of them.

Of course, we want not only to be free of the desire to use chanting to cheat our way out of suffering for sin, but to give up our sinful tendency completely. Only a pure life fully in harmo-ny with the truth of our spiritual nature will give us the satisfaction we are always seeking. And only a pure life will prepare the ground for the garden that will grow the flowers and fruits of love of God.

We will never sin if we have contempt for the illusion of material enjoyment. Part of that contempt will arise naturally if we have the superior pleasure of serving Krsna. At the same time, we should study the true nature of material life from scriptures and saintly persons. The root of sin is ignorance, or ignoring the obvious truths of what it really means to turn away from Krsna. The results of sin are birth, death, old age, and disease. One will never be satisfied with the pleasures of the body and mind separated from Krsna, and even things that apparently satisfy for a time will quickly fade, being temporary by nature. Why delight in what is temporary and superficial? Such delight is the true nature of sin.

Krsna as Rama promises, “It is My vow that if one only once seriously surrenders unto Me, saying ‘My dear Lord, from this day I am Yours,’ and prays to Me for courage, I shall immediately award courage to that person, and he will always remain safe from that time on.” (Ramayana, Yuddha-khanda 18.33) From what is one safe? Krsna says, “Just surrender unto Me. I shall deliver you from all sinful reactions. Do not fear.” (Bhagavad-gita 18.66) Those sinful reactions include the very desire even potential desire to sin.

And how do we surrender? We accept whatever will help us in spiritual life and reject what will be harmful. We learn from scriptures, gurus, and saintly persons what will be favorable or unfavorable. We see that ultimately only Krsna is our protector and maintainer, and we are happily willing to put His interest as our interest. And no matter what our qualifications and achievements, we give Krsna the credit, remaining humble.

This mood of surrender will quickly vanquish our tendency to sin and to misuse the holy name to cheat. It will allow the power and beauty of the name to blossom in our hearts.

Sri Gopinatha – the most merciful Lord!

2 Comments to “ Is Krsna Our Master or Our Servant?”