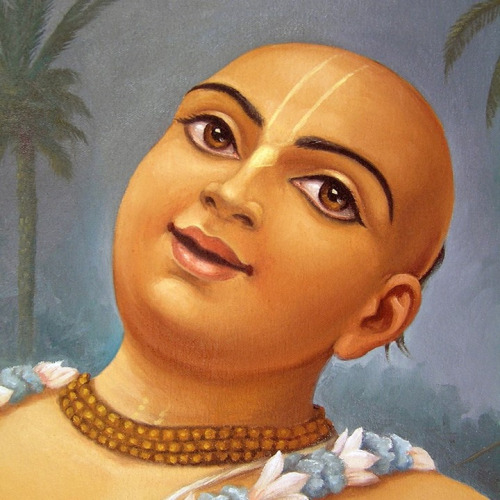 Srivas Pandit’s mysterious clap.
Purushottam Nitai Das: Once Lord Chaitanya asked Srivas Pandit, “I do not see you going anywhere to earn livelihood. You have a big family so how you maintain them.” Srivas Pandit replied, “In my heart I do not have any desire to go anywhere. Whatever is destined will come to me anyway.” And then Srivas clapped three times. One. Two. Three.
“What does it mean?” the Lord enquired.
“If three times food does not come to me, I will fast, and then I will tie a waterpot to my neck and drown myself in the Ganges.”
Hearing this extreme vow Chaitanya Mahaprabhu was astonished. The Lord said, “Why should you fast Srivas? Even if Goddess Lakshmi becomes poverty stricken still poverty will not enter your house.”
Srivas Pandit’s vow was not based on some sort of sentiment. He along with his family members used to remain absorbed in chanting the holy names of the Lord entire day and night. Being a pure devotee of the Lord he was well aware that the Supreme Lord is the maintainer of all the living beings of the universe.
And moreover Srivas Pandit’s house although was in this material world but it was in fact a part of the spiritual world because Lord Chaitanya, the Supreme Lord, personally used to come to his house and in his house the holy names of the Lord continuously reverberated. And we know that in the kingdom of the Lord no one has to work hard for their maintenance. In the spiritual abode everyone just serves the Lord and experiences complete satisfaction while doing so.
In B.G. 9.22, Krishna says, ‘To those who always worship me with exclusive devotion, meditating on my transcendental form, to them I carry what they lack and preserve what they have.’ Lord has promised that he personally takes care of his unalloyed devotees.
Hairidas Thakura was not allowed inside the Jagannath temple but Lord Chaitanya who is none other than Lord Jaganath would personally bring different varieties of delicious mahaprasadam of Jagannath temple for Haridas Thakura and he used to make sure that Haridas Thakura ate it.
Mrugrari, the cruel hunter, got enlightened by the mercy and teachings of Narada Muni. But he was bit worried, he asked Narada Muni, “If I give up hunting then how will I maintain myself and my family.” And the great sage replied, “You don’t worry. Once you take shelter of the Lord then you will not be deprived of any necessities of life.” Mrugrari gave up his sinful profession, became a devotee, and the Lord made sure that his needs are well taken care.
When Durvasa Muni told to the Pandavas that he along with his thousands of followers will come to have food at their house then the Pandavas were in great anxiety. They were living in the forest and had nothing with them to feed their guests at that time. Draupadi had Akshay patra, a divine pot, which could supply unlimited food but once Draupadi finished her food then the supply of food used to stop for that time period. And all of them including Draupadi had finished their meal. It was a great crisis; Draupadi remembered Lord Krishna and he immediately appeared. In that divine pot just a grain of rice was left and the Lord ate it. And as soon as Krishna ate it everyone’s hunger got satiated including that of Durvasa Muni and his thousands of followers.
When Krishna is satisfied everyone is satisfied. As soon as we bring Krishna in our life then we do not remain deprived of anything. In this material world all the necessities which is a must for our survival has been arranged by the Lord: the water which we drink, the air which we breathe, the food which we eat have not been invented by mortal beings but has been given to us by the Supreme Lord.
Extremely pleased by the devotion of Srivas Pandit, Chaitanya Mahaprabhu said, “To anyone who always meditates on me with exclusive devotion, I carry alms for them on my head. Anyone who meditates on me need never leave his door. All perfections will come to him automatically. Piety, wealth, happiness, and liberation will come to him. My servant need not ask for them. They will never leave my servant. My Sudarsana-chakra will always protect My servant. Even when all the universes are destroyed, he will not perish. Whoever remembers my devotee, I will feed and protect. The servant of my servant is very dear to me. Without even trying, he easily attains me. Why should he worry about food? I personally feed my servant. Srivas, you happily stay where you are. I will bring everything to your door.” (Srila Vrindavan Das Thakura’s Chaitanya Bhagavata Antya 5.38-64)