Halting the March of Kali 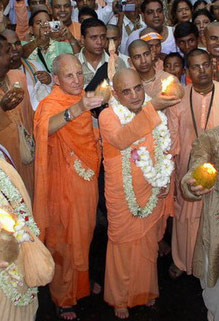 While most devotees seemed to be relishing being in the holy dhama and hearing about the Lord’s pastimes, I was having a difficult time. I found it very difficult not be disturbed by the degraded condition of most of Vraja. I try to think that it is just the covering of Maya that is just hiding the real nature of the dhama from fools like me. But I also feel that we (I) have to do something to help.

The parikrama visits the 12 forests, but we rarely see a tree. Generally “forest” means trees, but mostly, except at Badrinath, we see only plowed fields with a few trees here and there. We never see any bullocks working in the fields, but rather we see many tractors rushing around. Each tractor does the work of many bullocks and the bullocks are being sold for slaughter.

Vrndavana is supposed to be the land of cows, but in most places we see only buffalos, since the British propaganda that buffalo milk is superior most people have accepted just that. When we do find a goshalla there are no bullocks. Parasurama Prabhu met one goshalla owner who had over 400 cows, but no bulls. When he was asked about the bulls he shamelessly said that he had sold them for slaughter.

Parasurama Prabhu uses a bullock cart for the parikrama and distributes tens of thousands of books which explain something of the problems of modern so called advancement. The people appreciate his work. Every night he shows a movie in a village. He shows some Krsna lila and a documentary about the value of cows which also show scenes of an Indian slaughter house. The children watch very attentively and we hope that they will understand and change the mood in the future. Krsna provides for those who are dedicated to preaching. Parasurama just received 10,000 pounds sterling for preaching in India, so he is planning to do another Vraja Mandala Parikrama at Gaura purnima time.

I could not help but think about kali rather that KRSNA. But it is clear that there is no hope other than Lord Caitanya’s sankirtan movement. Devotees are doing something to help, but it is a huge task. Kurma Rupa prabhu has his “Care for Cows in Vrndavan” where he takes in sick, injured and abandoned cows. Now he has 120 very healthy cows and bulls, but no space to take in the hundreds more that are in the streets. He feeds them and gives them medical attention and they are all very happy, but still he has no work for the bulls. And they have even had “rustlers” trying to break in and steal the cows for the slaughterhouse.

His home page “http://careforcows.org/drupal/home” explains everything. The following is a quote from his website:

“Care for Cows in Vrindavan (India) maintains abandoned cows, bulls, retired oxen, and orphaned calves. We are international volunteers who offer our talents and resources to tend to the neglected cows living in Krishna’s holy land. We provide stray cows hay, flour, fresh grass, medical attention and a place where they can recuperate from injuries. At present we host a herd of one hundred and sixteen. There are approximately three to four hundred abandoned cows in Vrindavan requiring accommodation. Unless they are protected they are destined to subsist on refuse and become plagued by various debilitating and often terminal diseases or suffer injury from careless motorists. However, the most immediate danger is that they become abducted for slaughter by cattle rustlers who are active in this area today. Our present facility is full and there is an urgent need to acquire more land for their protection. To participate click on How can I Help?.”

Srila Prabhupada spoke strongly about cow protection. He stressed that we have to use the bullocks in farming, but we have a long way to fulfil that instruction. He wanted farms that produce foodstuffs for the temples and restaurants in the cities. He told us to produce Ghee and distribute prasadam that is cooked in Ghee. Our devotees in Mumbai are using ghee for the 90,000 lunches they are serving daily to school children. That program is spreading, with the help of the government, to many cities in India.

Of course our basic preaching is essential. When anyone becomes a devotee they automatically become vegetarians, so seeing all these anomalies of Kali yuga is impetus to distribute more books and do more hariman sankirtan. Our Govinda’s restaurants are serving thousands daily and we need more and more of them. We are seeing more and more “natural” type restaurants that are franchised and spreading everywhere.

Of course the ‘competition’ are very busy. KFC is opening a new shop daily in China. We need to become as ambitious as they are.

Praghosh Prabhu, our star restaurant entrepreneur, is opening the third GOVINDA’s in Dublin, Ireland. Besides providing spiritual food for hundreds daily, they employ many devotees and produce profits that help the temples. The two existing GOVINDA’s in Dublin are turning over 2,000 litres of fresh farm milk into curd every week! I am entreating him to create some kind of GOVINDA’s franchise, since Srila Prabhupada did say that householders could live by prasadam distribution.

There are many wonderful projects in ISKCON, and I cannot mention all of them here. All of our strong preaching is frightening to Kali, and he is working hard to spread cow slaughter, intoxication, gambling and illicit sex. We have to work harder to spread the chanting of the holy name and to distribute Srila Prabhupada’s books. And we have to demonstrate “simple living and high thinking”. That is a great challenge. In his last days Srila Prabhupada wanted to go to Gita Nagari farm and establish varnasrama. When he was asked what he meant by “varnasrama” he said, “I will sit there and teach them to live off the land”. There are many reasons for that and we see the need more and more as the agricultural products become more and more polluted and nutritionally depleted.

The Amish, Learning From 'The Plain People'
Luck of the Irish

The Welfare Of Others

5 Comments to “ Halting the March of Kali”