The Light of the Soul 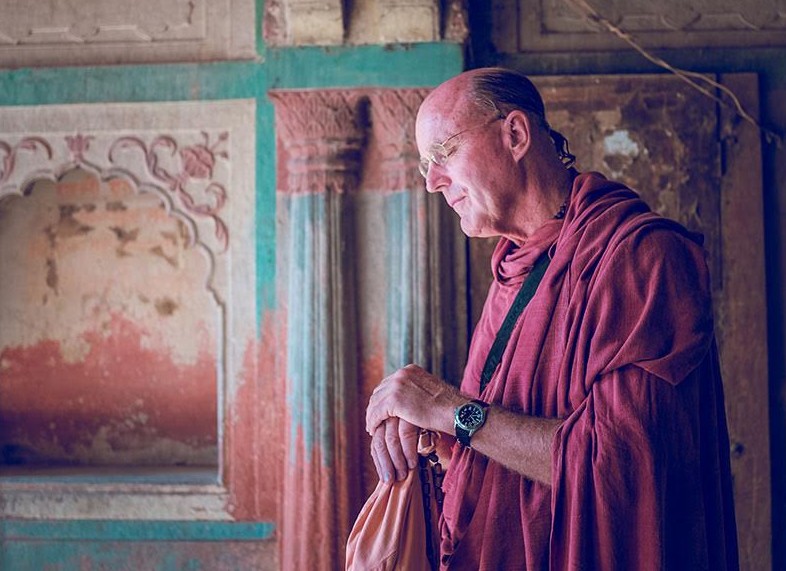 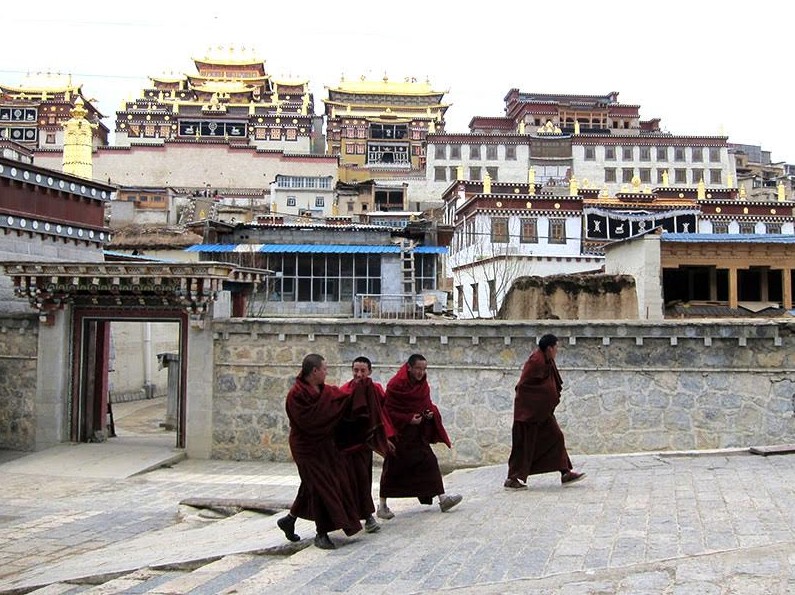 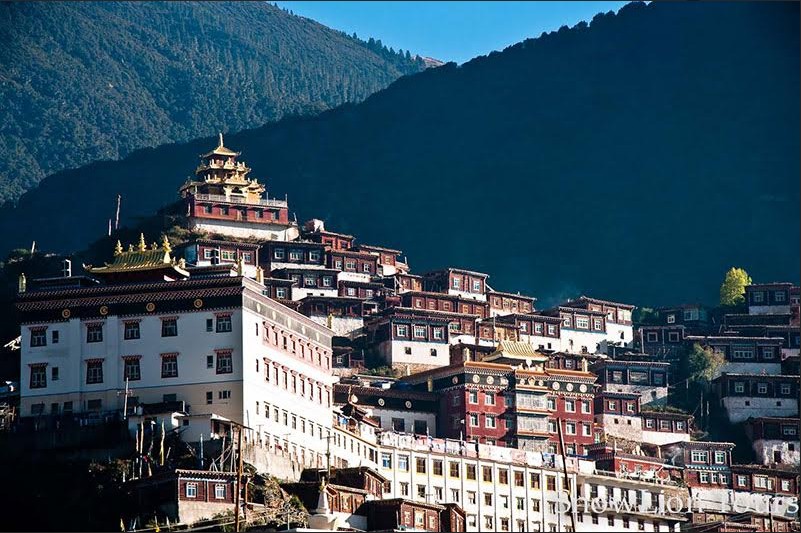 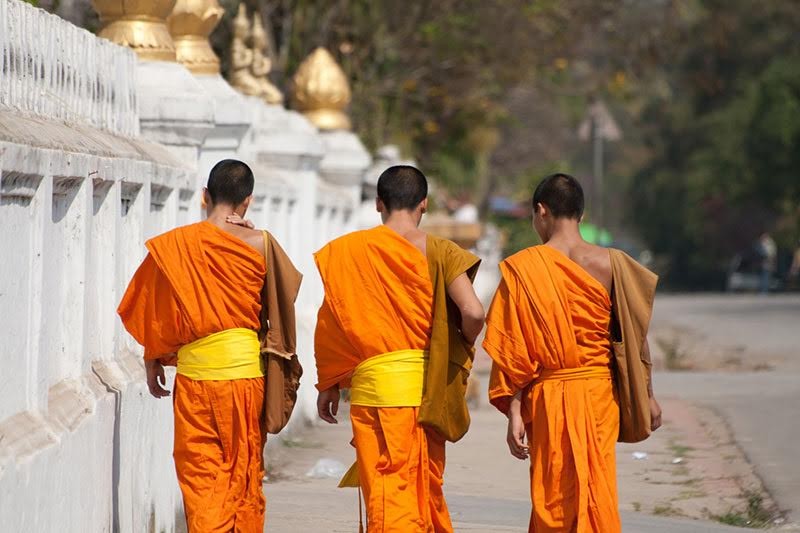 The Light of the Soul

“Welcome home!” Mahavan dasa, a Russian disciple, greeted me as I came out of New Delhi’s slick new airport terminal, tired after my ﬂight from Bangalore. Mahavan is my secretary when I travel in India. A brahmachari in his thirties, he wears saffron, shaves his head, and stuffs his bag with the latest gadgets—cell phones, iPads, ear buds, chargers.

“We’re not home yet,” I said. “I wish we were, but Vrindavan is still a good three hours away.”

“Well, let’s get there quickly,” he said. “The car is just over here.”

We began working our way through the crowd of people that were going into and coming out of the terminal when Mahavan suddenly pointed to an elderly man in soiled burgundy-colored robes in the midst of the throng. “Gurudeva,” Mahavan said, “look at that man. It looks like he’s asking people for help. I think he’s a beggar.”

“He’s not a beggar,” I said. “He’s a Buddhist monk from Tibet. It’s part of his tradition to approach others for alms. It helps the monks develop humility.”

“But he doesn’t have a begging bowl,” Mahavan said, “and he looks desperate.”

No one was giving the man anything. As we watched, a teenage boy shoved him aside. The monk covered his face with his hands and sat down on a bench. A moment later, an afﬂuent-looking couple walked past, and he got up and approached them, but they too ignored him, and when he persisted the man shouted at him. The monk looked ﬂustered. He sat back down on the bench and stared straight ahead, as if in contemplation. Despite his bedraggled condition, he appeared effulgent.

I was shocked at the way people were treating him. I felt it was my duty to help him, so I started to walk toward the bench when he noticed me and jumped up to hurry over and grab hold of my sleeve. “Please let me stay with you for a while,” he said in English. “I need the shelter of spiritual people.”

“Do you have the time?” he asked softly.

“For someone like you I have all the time in the world,” I said. We walked toward the bench he had been sitting on. He continued to hold onto my sleeve.

“Are you hungry?” I asked. “Can I get something for you to eat?”

“Have you lost your way?” I asked. “Maybe I can help you get to your next destination.”

“Just a minute,” he said. He straightened his back and closed his eyes, assuming a meditative pose. As he slowly inhaled and exhaled, he became calm, serene, and composed.

“How in the world did he manage to find such peace right after being mistreated?” I wondered. The minutes passed, and I felt a wave of tranquility come over me as well. Finally he opened his eyes. He didn’t look directly at me, but stared into the distance as he told me his story. “My name is Tsering Lama,” he said. “I come from the Sera Monastery in Lhasa, Tibet. I have lived there since I was five years old.”

“I am seventy years old.”

“And what service do you do in the monastery?” I asked.

“I study the scriptures,” he said. “Since my childhood I have studied the teachings of Master Lama Tsongkhapa who lived in the fourteenth century. He was the founder of the Gelug-pa School which I belong to, and a highly respected teacher of the Buddhist scriptures. My main service is to debate with others about the scriptures. It is an integral part of our tradition.”

“I am honored to meet such a learned scholar,” I said. “And I am sorry to see how people are treating you today.”

He shook his head, as if to suggest the mistreatment was of no concern or perhaps to dismiss my praise. “It has been my lifelong dream to visit Bodh Gaya,” he said. “It is the place where Buddha attained enlightenment. That holy site is here in India in the state of Bihar. Several months ago I said goodbye to my beloved disciples and set out on foot alone for Bodh Gaya.”

I wondered how many hundreds or even thousands of disciples such a man could have.

“When I arrived here in Delhi,” he continued, “two men invited me to spend the night at their home. I was exhausted from months of traveling, so I accepted their invitation. That night they fed me and gave me some tea to drink. The next thing I knew I was waking up on the sidewalk in a Delhi slum. It seems that the tea they gave me was laced with some drug that caused me to fall unconscious. I discovered that they had stolen everything I possessed: my clothes, my passport, my money, of course, and even my sacred chanting beads. I had been saving that money since my childhood for this pilgrimage, and suddenly it seemed impossible that I would make it to Bodh Gaya.

“Now I have nothing. I have been here at the airport for three days begging for money to complete my journey. Nobody has given me a single rupee, most likely because I look so dirty and disheveled.”

“What you say in humility is not true,” he said soberly. “I studied your face. I can see your true self through your eyes.”

“You can see me through my eyes?” I asked.

“Yes” he replied. “I have learned this from our Tibetan masters.” He looked straight into my eyes with a steady stare. Feeling uncomfortable, I looked away, but he caught my chin with his hand and turned my head toward him so he could study my face. His small hand had a powerful grip.

I also looked at his face. His dark brown eyes peered out from slanted eyelids that curved upward at the outer corners, reminding me of Tibetan art. He had a small ﬂattish nose, and his thin lips, though fixed in a determined line, seemed to be slightly, almost imperceptibly, smiling. He obviously had not shaved for some days, and his golden skin bore a few small scars. He seemed to glow with a radiance that I could feel more than see, and the softly pungent fragrance of Tibetan incense still hovered about his stained, travel-weary clothes. Though his head barely came up to my nose, I had the feeling that I was standing in front of someone large and powerful, someone who could knock me over with the ﬂick of a finger.

After some minutes he spoke. “You have served your master well in this life.”

“You have spread his glories through the written word, through discourses, and through festivals that you hold in distant lands.”

“Distant lands?” I thought. “How could a Tibetan monk know about the festivals in Poland?”

“But your service was interrupted last year by disease,” he said.

I caught my breath. “Yes,” I said. “Yes. You are exactly right. It was in March of last year.”

“And there is more disease to come,” he said.

“Oh really?” I said. I could hear the disappointment in my own voice.

He got off the bench and sat down on the ground in a full yoga asana. He closed his eyes once more and quickly seemed to be transported to another plane. After a few minutes his eyebrows furrowed in the intensity of his meditation and his lips moved as he chanted mantras in the Tibetan language.

People stopped to stare at the unusual sight: a sannyasi sitting on a bench and a Buddhist monk meditating on the ground next to him. They looked at me as if asking for an explanation, but I had none. I could only sit silently while he offered prayers on my behalf. Twenty minutes later he opened his eyes and turned to me. “I have removed the obstacles,” he said. “You will live a long life in service to your master.”

“Well, gosh,” I said. “Thanks so much.” I got up and helped him back onto the bench.

“Compassion is central to the teachings of Buddha,” he said.

“I know that,” I said. “But why are you being so kind to a stranger like me?”

“We are not strangers,” he said. “I am returning a favor you offered me several lifetimes ago.”

I felt the hair on my arms stand up.

“You mean… Are you saying we were together in a previous…?”

“Some things are better left unsaid,” he replied. “And I must go. I must try to fulfill my dream.”

“Wait,” I said. “Wait a minute. I want to help you.” “No,” he said. “As I already told you, I would not accept money from you. You are using it to help people less fortunate than yourself.”

He turned and started walking away toward the terminal.

“No!” I said running after him. “I won’t let you be mistreated by those people again. Please take this donation. It’s enough to get you to Bodh Gaya and back to Tibet by train.” I pushed some bills into his hand.

He looked at the money for a long time. When he looked up his eyes were moist.

“I will accept your kindness,” he said slowly. “And I will not forget you.”

He started walking away again, but then stopped and turned back.

“We won’t meet again in this lifetime,” he said. “But I will leave you a special gift in the monastery in Lhasa. When you arrive, mention my name. The monks will direct you.” He took a small piece of paper from the sleeve of his robe and wrote down the address of the monastery. I felt goose bumps erupt on my body.

“Please make sure you go there,” he said. “What I am leaving for you will be a great asset in service to your master.”

“Oh, no,” he said. “Nothing like that. It is something more wonderful than anything money could ever buy. You will not be disappointed.” With that he disappeared into the crowded metro station.

I turned to Mahavan. “What just happened? Was that a dream?”

“No,” he said, looking as astounded as I felt. “I saw it with my own eyes. Will you actually go to Lhasa?”

“Yes, of course I will,” I replied. “I’ve always wanted to go to Tibet. And now I have the best reason ever: to increase my service to my spiritual master, Srila Prabhupada.”

“Can I go with you?” Mahavan said.

“You must come,” I said, “just to remind me that I’m not dreaming when we discover what the monk has left us. And to confirm that service to a great soul never goes in vain.”

“One can attain the path of liberation from material bondage only by rendering service to highly advanced spiritual personalities. These personalities are impersonalists and devotees. Whether one wants to merge into the Lord’s existence or wants to associate with the Personality of Godhead, one should render service to the mahatmas. For those who are not interested in such activities, who associate with people fond of women and sex, the path to hell is wide open. The mahatmas are equipoised. They do not see any difference between one living entity and another. They are very peaceful and are fully engaged in devotional service. They are devoid of anger, and they work for the benefit of everyone. They do not behave in any abominable way. Such people are known as mahatmas.”

2 Responses to “The Light of the Soul”