Preaching program in Goa with Radhanath Swami. From 12th to 14th… 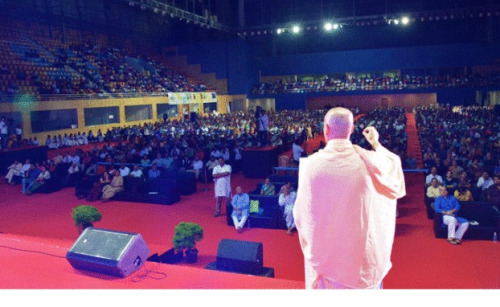 Preaching program in Goa with Radhanath Swami.
From 12th to 14th of February 2016 Radhanath Swami was at Goa, India. He addressed 9000 Goans at a two day event called Maha Jagruti, ‘the great spiritual awakening’, celebrating ISKCON’s Golden Jubilee. The festival was held at Dr Shyam Prasad Mukherjee Indoor Stadium.
The chief secretary of the Goan Government R. K. Srivastava, chairman of Dempo group Srinivas Dempo, chairman of NRB group Narayan Bandekar, and chief editor of magazine Viva Goa were present for Maha Jagruti.
At a program in Kranti Yoga Village Radhanath Swami reminisced about his Goan visit of 1971, details of which are found in his book The Journey Home. Kranti is a popular yoga school located amid tranquil coconut groves and luscious palm trees of southern Goa. 60 western yoga students attended the talk; 45 purchased The Journey Home. The Founder and Director of Kranti Yoga, Tarun Agarwal, was also present.
At another event, the inauguration of an ISKCON temple in Goa, Radhanath Swami said, “People from all over the world come to Goa in search of happiness, and so we have the chance to share with them the secrets of spiritual happiness as taught by Sri Chaitanya and Srila Prabhupada.”

Wonderful experience of a teacher who visited ISKCON Miraroad…

Celebrate Your Birthday with the TOVP