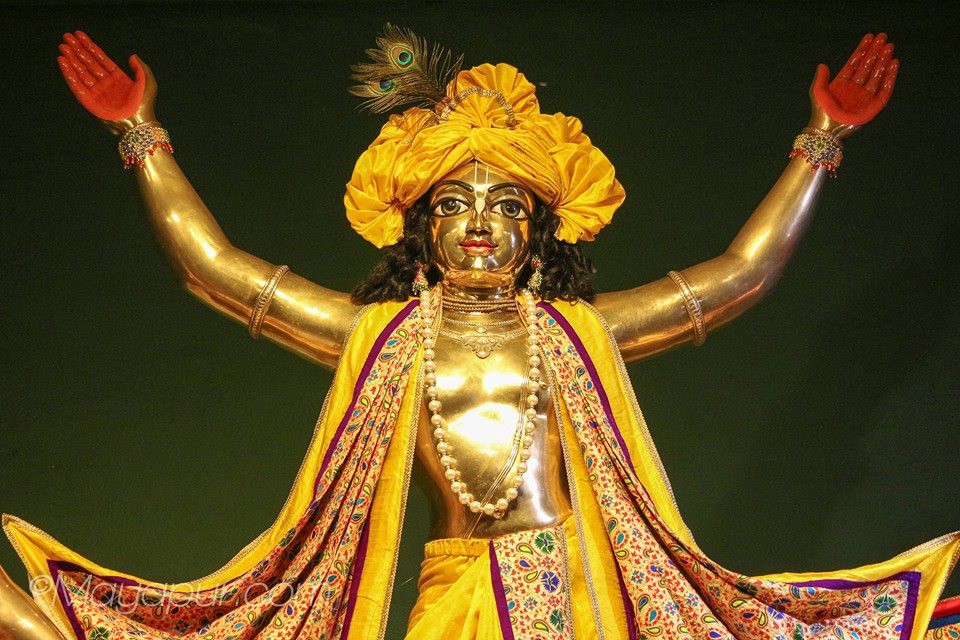 One hundred and eleven floors up, head bent over his desk, his GPBLe (Gross Physical Body, luxury edition) was stalled. His secretary had a suggestion.

“I know just what to do for you,” Punya said. “Let’s go check out that singing group, street level. You promised you would try it with me one of these days…”

Top Floor Soul could not deny it, he felt diverted. He had bought all the latest features, Many Branched Intelligence, the fastest version of Master Mind, and a downloaded Ambition Ego. However these new extras cost him; anxiety, stress, and there had been a conflict in his home. He trusted her concern, his secretary for many years. So they steered themselves down to street level.

“This will cheer you,” she said. He smiled and laughed to approach the Harinama party. For a joke he danced and twirled with the sound of the kirtan until suddenly he met, jumping in mid- air, homeless L. Soul (of part 1). Somehow they danced together. It was an awkward sight to behold, them dancing side by side.

Top Floor Soul discovered inner peals of laughter locked up in him. “Punya, this is it! It works!” he laughed, “So, this is what you do on your days off, eh?” They sang together,

Punya sang sweetly with the devotees. Then Top Floor Soul smiled and stood off to the side to compose himself. He adjusted his shirt and tie. He let his mind consider his latest fruitions: “Company’s stocks skyrocketing! I joined the Board of Directors in June… ended up with so much sway. Why did they put me there? My God! Aren’t I too young? Can’t keep up with it… never knew I would be able to sit with the Board. They really liked me. Dropped the whole thing on me when they left… and no one told me 111th floor would be full of chocolate truffles and beautiful women. Expansion, expansion, couldn’t stop it!… now we’ve got three thousand-forty-three franchise locations in the third world …”

Top Floor Soul watched his secretary singing with the Hare Krishnas for a little while. He glanced about anxiously and turned to look behind himself. There he saw the full length mirror in the Fifth Avenue window. It was the same one that L.Soul (of part one) had just looked into. Top Floor Soul happened to look there, too, but the mirror was obscured by the restless passengers that rode in his GPBLe.

Like L.Soul, Top Floor L.Soul carried certain passengers with him. The Gross Physical Body, Luxury edition, carries a highly developed entourage of superlative instruments. There were the Many Branched Intelligence, the fastest Master Mind, and Ambition Ahankara, and each were eagerly vying for a look at his reflection in the mirror.

However, emissions from the GPBLe created a blurry picture. Though a man of passionate interests, he had gotten what he wanted in life, but a glimpse of his Self he never got. Clouds of exhaustion were gathered and the GPBLe choked up and began to fail. What he did see was:

Chickens in small cages who depended upon a man who cut the beaks off their faces; a cow and her calf, but they were separated by a worker with the head of a pig; rain forests cleared for bloody enterprise; a steady rise in methane and carbon monoxide emissions…

His eight year old daughter had shown him some photos from an animal rights movement. His Master Mind did not like it at all. But she had burst into tears! … Many Branched Intelligence considered. Suddenly the GPBLe leaked tears, too. The Ahankara feature lost compression. The lights on the dash went dark, karmic obsolescence fructified. Overcome by overheated economic development, stalled in front of the mirror, Top Floor Soul broke down.

His secretary stood by. She felt very sorry and was not sure what to do, seeing he was stranded on the road. Her vehicle was peaceful and motherly. She had raised three successful sons. But her simple Mind instrument was sometimes flashing:

A village with farmland which stretched as far as the eye could see; a hundred family members gathered for weddings, colorful festivals and feasts; an abhiseka for Ganeshji; a band playing, marigolds strung in thick garlands draped over banisters on balconies filled with smiling, laughing friends and family… then, unexpectedly, several angry villagers arguing over a burlap bag of sterile seed; a golden double arch standing with its legs plunged into fertile ancestral farmland; three simple farmer GPBs hanging from ropes in a tree.

The secretary sighed deeply and became pale, but she knew it was no time for to stall. She rejoined the Harinama party.

The sound of the voices of those who sing the holy names of God is the only cause of opulence in this degraded, spiritually impoverished age! For the great fortune of Lost Soul and Top Floor Soul, stalled there in the material whirlpool, six young men dressed in saffron cloth were chanting on Fifth Avenue before them.

The lead singer sang very pleasingly, humbly leading the younger ones. How rare it is to see a great soul! From the looks of him he was apparently riding in a GPB, just the same as L.Soul and Top Floor Soul. He steered his GPB along Fifth Avenue, dancing and chanting with arms held high. However his particular vehicle was quite different. He was possessed of neither a GPB nor not a GPB. How is that?

The Intelligence, Mind and Senses are certainly the enabling features in every GPB. But in the case of this Hare Krishna singer these facilities were no longer constituted of material energy. In the case of the pure soul who is not lost in the material energy, the mind, intelligence, senses, and even the Knot (false ego) are unaffected by it. As a lotus leaf in untouched by water, the pure soul remains aloof.

This was a fact in the person of the singer. Pure, transcendental experience was constantly being awakened in him. His soul was riding in a body which was one hundred per cent spiritualized because his only motive is to please his predecessor spiritual teacher and Lord Sri Krishna.

The living being, by his desire to lord it over the material world and declining to cooperate with the Supreme Lord, contacts the sum total of the material world, namely the mahat-tattva, and from the mahat-tattva his false identity with the material world, intelligence, mind, and senses, is developed. This covers his pure spiritual identity…(yet) a pure devotee of the Lord does not live on any planet of the material sky, nor does he feel contact with material elements. His so called material body does not exist, being surcharged with the spiritual current of the Lord’s identical interest, and thus he is permanently freed from all contaminations of the sum total of the mahat-tattva. He is always in the spiritual sky, which he attains by being transcendental to the sevenfold material coverings by the effect of devotional service. The conditioned souls are within the coverings, whereas the liberated soul is far beyond the cover.

When they arrived at the temple, the singer began a speech to them, seated on a red cushion facing L. Soul, Top Floor Soul, Punya, and the other students.

“Patram puspam phalam toyam… there is no harm you become a big business man, but if you offer a little leaf, a little water and still so much wealth you are holding back, then that is not worship according to your position.”

Top Floor Soul raised his eyebrows. He and his secretary, Punya, listened intently. The Hare Krishna chanter then chose a verse to read from Srimad-Bhagavatam:

”Those who are devoid of hands are prey for those who have no hands; those devoid of legs are prey for the four legged. The weak are the subsistence for the strong, and the general rule holds that one living being is food for another.”

Top Floor Soul was a bit perplexed, but he was very keen to listen to these words of Bhagavatam. “So are we all supposed to eat one another?’ he wondered, “Then what of this confusion I feel to see the suffering in this world?”

The Hare Krishna chanter continued, “There is nothing to be lamented if a tiger eats a weaker animal, including a man, because that is the law of the Supreme Lord. But although the state law states that a human being must subsist on another living being, there is the law of good sense, also, for the human being is meant to obey the law of the scriptures. This is impossible for other animals. The human being is meant for self-realization, and for that purpose he is not to eat anything which is not first offered to the Lord. The Lord accepts from his devotee all kinds of food preparations, , and after the Lord accepts such foodstuffs the devotee can partake of prasada, by which all suffering in the struggle for existence will be gradually mitigated.”

After the class the monks came around and served a very delightful, nourishing meal of Krishna prasada to the guests. L. Soul’s Senses became more and more satisfied with every bite. He had not had a hot meal in many days. He was filled with awe and hope that he may be able to continue to stay on with the monks and eat this sweet tasting food like he had never tasted before in his life. He might try to become a temple servant and put aside his bad, fearful life.

“Punya, this tastes like the food you sometimes bring to me at the office, like the samosas…?”

“And these monks, they are very special people, doing this in the middle of Manhattan…”

“They are,” said Punya. She smiled, satisfied to see her boss in this situation.

“Ah, I get it, so you have never really been able to explain all this to me,” he said, “There is a lot to find out here. I had no idea. This is really so wonderful. Thanks so much for bringing me to this place.” Top Floor Soul was pleased to get his very own copy of Bhagavad-Gita, As It Is.

He wrote a check to the temple and he gave it to Lost Soul. “Give this to your leader,” he said, and then he whispered, “And why don’t you ask him if you could get a shower or something?” L.Soul took the check for twenty-five thousand dollars and handed it to the speaker.

That day the world became a little lighter, when three unlikely vehicles carrying lost souls yielded to one another, in the service of Lord Sri Krishna. As stated in part one, all souls in the material world are lost. Only the best refuse to become accustomed to it.

Everyone is attracted to Krishna (video)
Lost Soul and the GPBs

The Price of Causeless Mercy

1 Comment to “ Lost Soul and the GPBs, part two”