Television: The No. 1 Public Enemy of Devotion 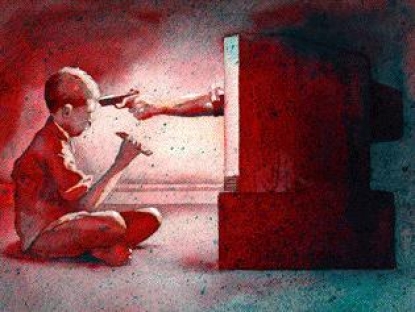 The message of this posting is very simple: watching TV is bad, very bad for bhakti-yoga.

Yes, I hear the objection: “But Prabhu, we use it only to watch videos of Krishna and Srila Prabhupada!” If this is true for you, I offer you my humble obeisances and I assure you that this article is not written for you.

I see a lot of TV sets in devotees’ homes. Some are pervertedly prominent (shouldn’t the best place of the house be reserved for the altar?), others bizarrely humongous (as if it were essential not to loose any single micro-drop of poison). Televisions are used as babysitters (isn’t this irresponsible parenting? Isn’t this a less recognized form of child abuse?), as shelter in moments of boredom or tiredness (when the defenses of the intelligence are weaker and more vulnerable), to watch sports (muscular thugs running after balls of different sizes and shapes), to watch telenovelas and soap operas (basically chronicles of multiple adulteries), to “see what’s going on” (smokescreen news that are corporation-controlled, largely misleading, paradigm-influencing and mostly irrelevant anyway). And of course there are the movies! (abundantly spiced with tons of gross and subtle sinful sexuality, numbing violence, bodily identification, retarded nationalism, childish machismo, animal carcasses presented as food, “heros” indulging in smoking cancer-sticks and drinking alcoohol, protagonists uttering profanities, atheistic propaganda, unrealistic, repetitive storylines and so on). And of course TV mercifully showers on us the omnipresent publicity for useless and damaging products.

“But,” I hear another objection, “what about the educational programs?” Well, Prabhu, first of all we should analyze such programs and see how educational they really are. Then, even if we do find something truly educational in them, my question would be: is the educational content worth exposure to all the rubbish that comes along with it? Would you offer your children lassi mixed with pig’s urine?

Of course, I have to provide quotations; here is one: “Those outside of the Krsna consciousness movement are interested in reading heaps of newspapers, magazines and novels, solving crossword puzzles and doing many other nonsensical things. In this fashion people simply waste their valuable time and energy. In the Western countries old men, retired from active life, play cards, fish, watch television and debate about useless socio-political schemes. All these and other frivolous activities are included in the prajalpa category. Intelligent persons interested in Krsna consciousness should never take part in such activities” (Nectar of Instruction, verse 2, purport).

TV is robbing so much time to so many devotees; it’s piling trash on our psychic body (and sitting in front of it spoils our physical body too.). Due to weakness many are subliminally and passively absorbing the ideas, appetites and priorities of tenth-class people and professional sinners. How will this effect our growth?

Let’s not be surprised if the time of death comes and we find ourselves with our pants down and our TV on.

Let’s not be surprised if tomorrow morning (and on many more mornings) we loose the (unrecoverable) brahma-muhurta time because we watched those shows.

Let’s not be surprised if we can’t find the time to fulfill our commitment with japa.

Let’s not be surprised if we can’t find the time or inspiration for regularly hearing or reading the words of the Founder-Acarya.

Let’s not be surprised if our brains are turning into mush due to lack of utilization and we can’t remember even a sloka from the Gita.

Let’s not be surprised if we can’t find the energy to go on book distribution.

Return those stupid videos to Blockbuster or to whatever hellish company your rented them from. Let’s then pick up our japa and peacefully spend the last years of our life in spiritual pursuits, regretfully begging forgiveness to Krishna and Srila Prabhupada for all the time we wasted in front of the TV.

Your servant, Kaunteya Das
PS – And here, if it helps building motivation to unplug the monster, we can read:

Facts and Figures about our TV Habit

I. TV Undermines Family Life
1) Time per day that TV is on in an average US home: 7 hours, 40 minutes
2) Amount of television that the average American watches per day: over 4 hours
3) Time spent daily with screen media for U.S. children age six and under: about 2 hours
4) Percentage of US families with children age 0-6 with at least one television: 99
5) Percentage of US households with 3 or more TVs (2003): 50
6) Percentage of parents who say that if they have something important to do, it is likely that they will use the TV to
occupy their child: 45
7) Percentage of Americans who always or often watch television while eating dinner: 40
8) Percentage of Americans who say they watch too much TV: 49
9) Time per week that parents spend in meaningful conversation with their children: 38.5 minutes
10) Percentage of 4-6 year-olds who, when asked, would rather watch TV than spend time with their fathers: 54

III. TV Promotes Obesity
1) Adults in US technically obese: 1 in 3, or 62 million
2) Percentage of American children who were seriously overweight in 1964: 5; 2003: more than 15
3) Amount of daily moderate physical activity recommended for children: 60 minutes
4) Percentage of young people who report having had no recent physical activity: 14
5) Factor by which men who watch more than 21 hours of TV a week increase their risk of Type 2 diabetes: 2
6) Percentage chance that an overweight adolescent will become an overweight or obese adult: 70%
7) Percentage higher health cost for Kaiser Permanente members with Body Mass Index of 35 or higher: 44
8) Percentage of dollars spent on clothing for men and women’s plus sizes: 23
9) Economic cost of obesity in the United States in 2000: $117 billion

IV. TV Promotes Violence
1) Number of violent acts the average American child sees on TV by age 18: 200,000
2) Number of murders witnessed by children on television by the age 18: 16,000
3) Percentage of youth violence directly attributable to TV viewing: 10
4) Percentage of Hollywood executives who believe there is a link between TV violence and real violence: 80
5) Percentage of children polled who said they felt “upset” or “scared” by violence on television: 91
6) Percent increase in network news coverage of homicide between 1993 and 1996: 721
7) Percent reduction in the American homicide rate between 1993 and 1996: 20
8) Percent increase in number of violent scenes per hour on 10 major channels from 1992 to 1994: 41
9) Percentage of programs that show the long-term consequences of violence: 16
10) Percentage of violent programs that emphasize an anti-violence theme: 4

V. TV Promotes Overconsumption
1) Number of TV commercials viewed by American children a year: 40,000
2) Age by which children can develop brand loyalty: 2
3) Number of TV commercials seen by the average American by age 65: 2 million
4) Percentage of toy advertising dollars spent on television commercials in 1997: 92
5) Amount spent on television advertisements directed at young children in 1997: $1.3 billion
6) Percentage of local TV news broadcast time devoted to advertising: 30
7) Total amount of money spent in 1999 to advertise on broadcast television: $40 billion
8) Net worth of the typical middle-class American household after accounting for debts: less than $10,000
9) Percentage of American children age six and under who have products based on characters from TV shows or movies: 97

VI TV Squelches Political Awareness
1) Money spent on ads for the major presidential candidates between June 1, 2000 and September 13: $63 million
2) Money spent on issue ads between January 1, 1999 and August 30, 2000: over $342 million
3) Percentage of those which were attack ads: 61
4) Amount of time broadcasters must provide to candidates free of charge under the 1996 Telecommunications Act: 0
5) Value of public airwaves allocated to broadcasters at no cost under the 1996 Telecommunications Act: $70 billion
6) Amount spent on lobbying by TV broadcasters and the National Association of Broadcasters in 1996: $4 million
7) Number of network news stories about the environment in 1990: 377; 1996: 113
8) Percentage of Americans who can name The Three Stooges: 59
9) Percentage of Americans who can name three Supreme Court Justices: 17

Letter to the Ministry of Justice of the Republic of Kazakhstan,
"Mysterious Antiques"

2008: Year of the Congregation

19 Comments to “ Television: The No. 1 Public Enemy of Devotion”