Simantadvip in Mayapur. (Album with photos) This island… 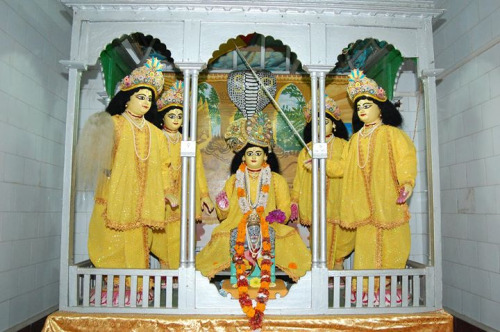 Simantadvip in Mayapur. (Album with photos)
This island represents sravanam (hearing). Places covered in Simantadvip tour are Yoga pitha, Srivas angan, Advaita bhavan, Caitanya math, Chand Kazi samadhi and Sri Jagannath mandir.
Yoga pitha: Yoga Pitha is the appearance place of Lord Caitanya Mahaprabhu. It is the home of His father Jagannatha Mishra. Here you can have darsan of several Deities including Sri Panca Tattva, Sri Lakshmi Nrsimhadev and Mahaprabhu with His wives Lakshmipriya and Visnupriya.
Srivas Angan: It is the birthplace of Harinama sankirtan. Sri Caitanya and His associates used to have all night long kirtan here.
Advaita Bhavan: Advaita Acharya lived in Santipur but kept this Bhavan for His Mayapur visits. Deities of Lord Chaitanya (standing) and Advaita Acarya (sitting and offering) are worshiped here.
Chaitanya Math: This temple and the matha were established by Srila Bhaktisiddhanta Sarasvati Thakura in 1918 and it was his headquarters for his preaching throughout India. He called this place Vraja-pattana, the place where Vraja is manifest. By his spiritual potency, Syama-kunda, Radha-kunda and Giri Govardhana of Vrindavana are all manifest here.
Chand Kazi samadhi: Chand Kazi was the Chief Magistrate of Navadvipa. He was a devout & strict Muslim and he oppressed Hindus in their religious practices. Later Kazi took shelter of Mahaprabhu’s lotus feet and he became a devotee. His samadhi was built at this place after his disappearance from this world.
Sri Jagannath mandir: The holy dhama of Sri Kshetra or Jagannatha Puri is eternally manifest in this holy place and one can attain all the benefits of visiting Jagannatha Puri by visiting the Jagannatha Mandir at Simantadvipa.
Find them here: http://goo.gl/YyV3Iq

Victory for Radhadesh, Iskcon Belgium! After 4 years of plenty…