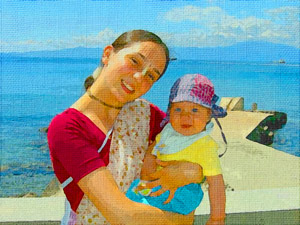 Around the world, a leading cause of death and injury for women is association with violent men. Women can be beaten and abused by the very people they look to for protection, husbands, fathers, civil authorities, members of the armed forces. In some cases, even clergy members violate the trust of the women in their congregations.

In a recent positive development, ISKCON’s GBC has constituted a task force charged with identifying and rectifying abuse of women. Domestic violence, sexual assault and other atrocities may take place in any organization, so following on their bold approach of openly addressing past problems of child abuse, ISKCON’s leaders have taken a step toward healing rather than hiding injuries to ISKCON’s female members.

Srila Prabhupada reminded his followers that we are not this body. Based on the intricacies of karmic reaction, a soul can change from male body in one lifetime to female body in the next. Srila Prabhupada was unique among his peers in engaging women in active preaching, basing assignments on ability and not just gender. By valuing the soul, not the bodily dress, Srila Prabhupada taught us that all devotees are to be cherished.

A common response to incidents of abuse of women is to say “it’s not my problem,” or “it’s a private, family matter.” In fact, abuse of Vaisnavis affects everyone in our ISKCON family. The wife who is assaulted by her husband is also the mother of second or third generation devotees. What will those children think of a misrepresentation of Vaisnava philosophy that demands “submission” at the cost of bruises and broken bones?

The son raised by an abusive father to believe that a husband’s role includes violence may be the Vaisnava that your daughter or granddaughter marries. The daughter, raised to fear her violent father, may be the mother of your grandchild. “Family problems” have an unfortunate way of spreading quickly.

Srila Prabhupada instructed us that Vaisnavas have a duty to protect women. The Kurus were executed on the battlefield of Kuruksetra (at least in part) because they failed to protect Draupadi in the assembly hall.

The problem of systemic abuse of women plagues religious and secular organizations around the world. From the United States Air Force Academy to refugee camps around Sudan, women report beatings, rapes, sexual extortion and other indignities. As a global organization, ISKCON has the opportunity to become a leader in improving the treatment of women everywhere. We offer our prayers to Srila Prabhupada and Lord Krishna that we are up to the challenge.

The Task Force has identified three areas in which programs for the protection of women will be developed. Those include education on identifiying and preventing abuse, support services for abuse survivors, and a quasi-judicial body for dealing with allegations of past and present abuse.

Questions, suggestions, and volunteers are welcome! In addition, the Task Force would like to document reports of abuse and offer support to abuse survivors. Reports and referrals will be kept confidential at the request of the abuse survivor. Please contact Radha dasi at rebecca@shelterfromthestorm.com for more information.

GBC: Maintaining the Principle of Unity in Diversity