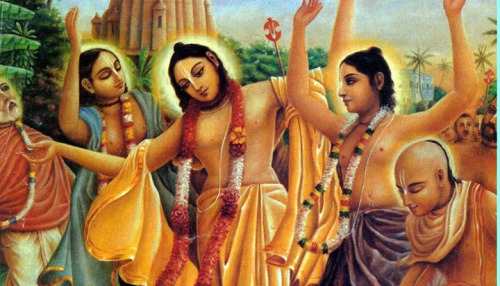 Life and pastimes of Sri Krishna Chaitanya Mahaprabhu.
“Most of His contemporary biographers have mentioned certain anecdotes regarding Caitanya which are simple records of His early miracles. It is said that when He was an infant in His mother’s arms He wept continually, and when the neighbouring ladies cried ‘Haribol’ He used to stop. Thus there was a continuation of utterance of 'Haribol’ in the house, foreshewing the future mission of the hero. It has also been stated that when His mother gave Him sweetmeats to eat, He ate clay instead of the food. His mother, asking for the reason, He stated that as every sweetmeat was nothing but clay transformed, He could eat clay as well. His mother, who was also the consort of a 'pandita’, explained that every article in a special state was adapted to a special use. Earth, while in the state of a jug, could be used as a water pot, but in the state of a brick such a use was not possible. Clay, therefore in the form of sweetmeats was usable as food, but clay in its other states was not. The lad was convinced and admitted His stupidity in eating clay and agreed to avoid the mistake in the future. Another miraculous act has been related.
To read the entire article click here: http://goo.gl/jknoFH

The importance of spiritual association (sat-sanga)

Notes of a pilgrim. Mukhya Devi Dasi (President of…